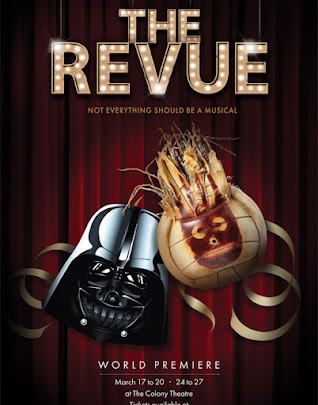 Imagine a pair of slightly over-the-top caricatures of a Broadway producer (Rick Batalia) and director (Matt Walker) facing the closure of their own beloved theatre.  They need a hit to bring in massive ticket sales, so begin to pour over musical ideas--sequels to famous films, versions of different stories, etc. each to the style of some specific composer.  Each one therefore (with one or two exceptions) gets at least a piece of a musical number appearing on stage for them--and us--to enjoy.

Now, this is a silly premise.  Silly, and let us be absolutely clear, very fun.  The Revue is the brainchild of Jim Dooley, directed by Matt Walker and brought to life by a startlingly high quality cast of performers!  More than anything, they most bear the responsibility of creating this wild roller coast that just keeps getting sillier and sillier and yet also better and better with pretty much every scene.  From a Jim Steinman version of Titanic Part II, a Stephen Sondheim adaptation of Dr. Strangelove, to Jaws a la Meredith Wilson, and the penultimate piece of brilliance I won't reveal save it is a version of The Wizard of Oz I really want to see, everything just keeps getting sillier but done with increasing skill.  Travis Leland, Isaac Robinson-Smith, Tiffany Daniels and Katie DeShan all give every single number their all.  And it works!

Over the course of the show, the zaniness and left turns keeps getting dialed up.  Not every number will be to everyone's taste (The Sound of Music II did not quite work for me, nor did Castaway: The Musical) but sooner or later most audience members--especially those who like musicals--will guffaw.  That is my prediction, and I stand by it.

Posted by Zahir Blue at 7:44 PM No comments: 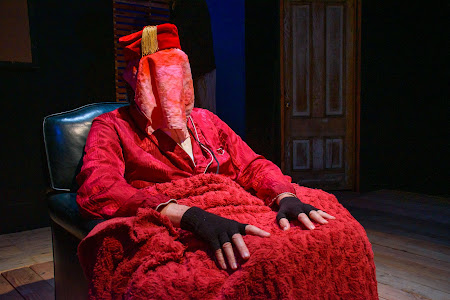 Spoilers ahoy!
City Garage re-emerges from Covid 19 with Endgame by the late, great (and controversial) Samuel Beckett.  Many agree this play, a weird exploration of the moments and process of ending, perhaps exceeds his more famous Waiting for Godot in power and poignancy.  Certainly it remains an easy play to misunderstand.
Regular readers might experience a bit of deja vu, but methinks it crucial the note this show--as is the case with most of City Garage's productions, is not intended as a story.  To be sure it has a story, or if you prefer a plot.  Its real nature emerges once an audience member understands what they are seeing and hearing is more or less a dream.  A dream given form.  A dream acting out with all the beautiful, terrifying, hilarious "logic" of an actual dream.  Do not look for a linear tale here, but an experience.  I call this the Theatre of Dreams.
Within that context, we are in world winding down to its end.  Four survivors hold on for a little while, much reduced from what they once were, within nothing to do but focus on trivia--trivial desires, trivial attempts at pleasure, trivial cruelties, even trivial enlightenments.  All four characters know they are circling the drain.  This is the end.  And knowing that, they play games.
Hence the title.  Clov (Troy Dunn) pretty much is the only active one in the bunch, obeying the orders of the feeble, blind Hamm (Bo Roberts) who sits in the middle of a room surrounded by nothing, demanding answers to questions he asked minutes before, insisting Clov look out the window and describe what he sees, or push his chair around the room as a meagre substitute for travel.  Off to the side are two large garbage cans, where live--or at least dwell--Hamm's parents, Nell (Martha Duncan) and Nagg (Andy Kollack).  If this all sounds bizarre, then you've latched onto a basic truth about the show!
Events such as they are do take place, however.  Struggles even, especially between Clov and Hamm.  One longs to leave but fears to.  The other longs for everything to simply end, yet desperately tries to fill his time, trying to impose meaning upon things that mean...well, nothing.  Or, everything, since there is nothing else.
What results from all this, especially under the direction of Frederique Michel, ends up startlingly compelling as well as rather surprisingly funny.  Dark humor, yes, but then is not humor one of the best vaccines we have against despair?  Michel's direction coupled with this cast and the quiet, profound design (costumes by Josephine Poinot, set and lights by Charles Duncombe) pulls us into this metaphorical world, and in the end we recognize it--not because we've survived any kind of genuine apocalypse, but rather we've all gone through a thousand tiny ones.  The death of childhood.  An ending of love.  One chapter in life starts, only after the previous one dies.  Friendships fade away.  Places change and cease to be what once they were.  So do we.  From such microscopic and inevitable catastrophes we find a reason to laugh when an overworked servant keeps forgetting a ladder when he goes to use it.
In this play, that happens.  A lot.  And it remains funny.
Endgame plays Fridays and Saturdays at 8pm, Sundays at 4pm until April 10, 2022, at City Garage, 2525 Michigan Ave, Building T1, Santa Monica CA 90404 (right across the street from the 26th Street/Bergamont Station train station).
Covid safety protocols will be observed.  Proof of vaccination required.  Masks must be worn inside the theatre.
Posted by Zahir Blue at 10:21 AM No comments: 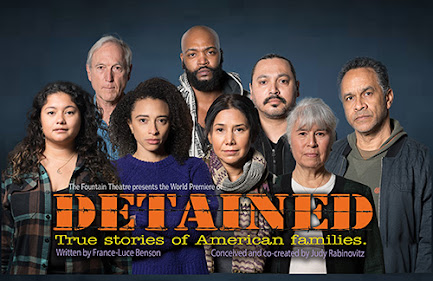 Honestly I can say The Fountain Theatre is one of those places that never disappoints.  Detained, by by France-Luce Benson, conceived and co-created by Judy Rabinovitz, certain delivered with what I would expect.  It takes the form of a Reader's Theatre, presented a dramatized lecture/power point about what we as a nation have been doing to those not born here for the past few decades.  It makes for a grim awakening.

I did not like learning much of what I did.  We like to imagine the United States does not do most of the worst things other countries do.  Sadly, it has.  It does.

But there lies a subtle weakness in this show.  I know from my own (not very in depth) knowledge of this issue thing are much worse than presented here.  Yes, I wanted to cry several times watching this performance, and a few times tears did indeed appear.  But I never felt myself bleed.  I never felt myself rendered silent with the power of what happened on stage.  Informed, yes.  Moved, yes.  Transformed?  No.

Which may be a much higher standard than should be required.  Truth to tell, the show is very well done, conveying so much of deliberately cruel policies and the human wreckage left in their wake.  The cast of Liana Aráuz, Camila Ascencio, Christine Avila, Will Dixon, Jan Munroe, Theo Perkins, Marlo Su,  and Michael Uribes all do very well.  The ensemble shines much needed light on a subject we all of us (including myself) need to give much more priority, more time, more indignation.

Posted by Zahir Blue at 3:20 PM No comments: