Today begins The Annotated Carmilla Blog Tour, in which the subject matter of my book The Annotated Carmilla shall be addressed all over the web.  You are invited.  Also, you are invited to watch this, the uber-rare Polish Television adaptation of Le Fanu's Carmilla.  Since it is unlisted and will be deleted come the end of the blog tour (October 12, 2011) here may be your only chance to see this flick (other websites in the blog tour are listed below):

Forgive the wild and crazee speculation...

Many may not be aware of this, but DC Comics is in the process of re-booting their entire line.  That's right, decades of continuity tossed out the door in favor of a fresh start.  All characters and back stories have been re-imagined, starting over from scratch (and in the process wiggling out from under a lifetime of convoluted continuity).  Marvel Comics did something similar awhile back, creating an alternate line dubbed Ultimate Marvel for purposes of exploring how things might have gone differently.  Marketing ploy?  Definitely!  But also, an attempt to re-energize a creative world, make characters more fresh, experiment with ideas and styles.


But I've decided to let my own imagination run loose, picking and choosing from a variety of different sources my own dream team of superheroes!  Pure self indulgence!  I know!  But FUN!  So without further ado allow me to introduce the mighty Earthguard! 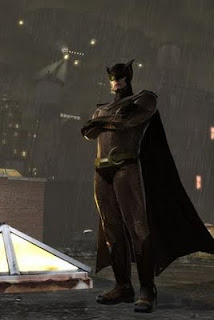 First, Nite Owl from the graphic novel and motion picture Watchmen.  Many who first saw this character in the movie trailer saw what one commentator called "a weak sauce Batman."  True, the overall look of this man harkens back to the Dark Knight, and in terms of fighting skills he's easily the equal of Bruce Wayne.  Likewise, he's a gadget man, but not as elaborately as the Caped Crusader.  In fact, Nite Owl began as a version of the Blue Beetle, which most obviously shows in his flying craft "Archie" (short for Achimedes).  Yet this hero evolved into very much himself, the son of a wealthy corporate lawyer with no interest in following in any parental footsteps.  Rather, he loved the world of myth, of legendary heroes and how they still live in us with our reaction to this world.  Case in point--the original Nite Owl!  Daniel Dreiberg had a serious case of hero worship with the beat cop who donned a mask in the 1930s to defend citizens from gangsters in the middle of the Great Depression.  When Hollis Mason, the first Nite Owl, unmasked himself and wrote his memoirs, Daniel found his calling.  Longing to live in an age of heroes, he decided to become one, taking on the mantle of a modern version.  Yet he remained, as one person put it, "the most human super hero," someone never quite sure of the answers (and thus less likely to commit atrocities in the name of an ideal).  His compassion and loyalty were never more shown than at the end of Watchmen, when he alone wept at the death of a his tormented almost-friend, the borderline sociopath Rorschach. 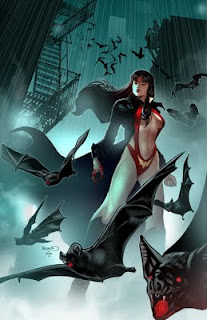 Second, Vampirella!  Her origins remain obscure, and in my own mind remain utterly mysterious (because the one given her at first frankly made not a lick of sense and has been ret-conned more than a couple of times).  Essentially, she is a vampire, but one without a past.  She cannot recall a time when she was not a vampire, yet her memories do not go that far back.  Certainly this world and its people seem alien to her.  Yet although instinct tells her to see us as nothing but food, she refused.  Desperately seeking to control her thirst, she makes it her task to combat and defeat several mystical forces of pure evil.  One of these is the dread demon CHAOS who plans to mate with Vampirella, allowing it to manifest in this world.  Another longtime foe is none of than Count Dracula!  Yet for all that, Vampirella in many ways remains a young woman just trying to get by.  Her "secret identity" is a magician's assistant to a faded but kindly old stage illusionist named Pendragon.  One can see the brilliant Nite Owl developing a blood substitute for her (as was done in the comics, predating True Blood by decades!)--the man of science fighting along side this lady of mystic mystery and menace, 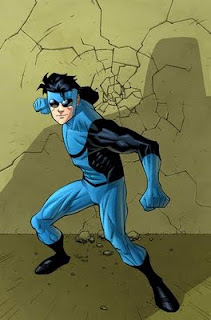 Next up, Invincible from Image Comics.  A mere teenager, Mark Sebastian Grayson is also the son of Omni-Man, a member of a super-powered race who came to Earth and became one of the premiere heroes of the age, marrying in the process.  Then one day he murdered nearly every other member of the world's greatest super-powered team (pretty much identifiable as Batman, Wonder Woman, the Flash, Aquaman, etc.).  Turns out his people were preparing an invasion, with him as an advance scout.  But his son refused to accompany him offworld, vowing to defend his world from his father's people.  Talk about issues.  Talk about a burden!  Mark faces up to that challenge with a smartass attitude and an dogged determination to do the right thing.  Fortunately, he has the kind of powers that stand him in good stead as he slowly learns how to be a successful defender of humanity--hyperspeed, extreme strength, incredibly high endurance, and the power of flight.  Although the youngest member of the team by far, in terms of raw ability he is likely the single most powerful person not only among them but possibly on Earth. 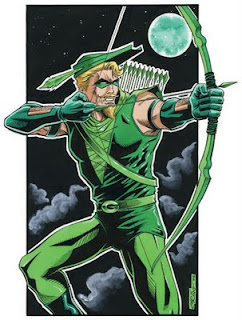 Green Arrow from DC Comics began as essentially a retread of Batman--wealthy playboy who fights crime in his spare time.  Over time, though, that changed.  Methinks maybe the reason for that is mostly his motivation.  Unlike Bruce Wayne, Oliver Queen suffered no childhood tragedy.  He had no issues to work out.  Rather, as his entire life shows, he was a born adventurer -- who happened to be an Olympic level archer (literally--he has gold medals).  He found his bliss, as it were, going out and fighting the good fight.  Along the way, he enjoyed quite a few non-masked adventures including a shipwreck and more than a few love affairs.  Methinks he holds the record for superhero with the most illegitimate children (be fair--upon finding them he generally tried his best to be a good dad).  An older man (he's probably the oldest person in this team, with the possible exception of Vampirella), his experience translates into cunning.  Green Arrow hardly ever uses 'stunt' arrows.  Doesn't need 'em!  Atypically, he also has a clear political agenda, being an advocate of the downtrodden with plenty of contempt aimed at the corrupt or simply callous of his own class.  He'd be something of a father figure for Invincible, as well as (to some extent) Nite Owl.  Maybe.  He'd love to flirt with Vampirella, but be ever ready to pierce her heart with a wooden shaft ... just in case. 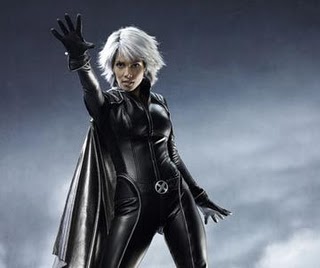 Finally, I would include Storm of Marvel's The X-Men.  Several reasons, some technical.  One is that her powers make her unique -- essentially psychic control of the weather (coupled with skills learned as a thief in the streets of Cairo).  For another, she is what the others of this team are not--a natural Leader.  And she has points of connection (sometimes startling) with the other members.  For example, she too traveled the world and had many adventures before becoming a hero.  She has been homeless, a thief, a teacher, worshiped as a goddess, offered a throne, been bitten by Count Dracula and can personally take on almost anything inside the earth's atmosphere.

This has been an exercise of the imagination.  I invite you to do as much--who would your supreme team of superheroes be?  I went after a balance of powers and story-telling potential.  You might prefer a different take.  Either way, enjoy!
Posted by Zahir Blue at 1:26 PM 1 comment: