Zombie Joe's Underground theater often creates different "series" of theater events, the most famous of which is probably Urban Death. The latest, playing until May 5, 2013, uses Grimm's Fairy Tales as their inspiration. The idea, wickedly and wonderfully simple, centers around re-telling famous stories but in the modern Hollywood.

Herein lies many seasons of possible shows, dependent upon what folks there create from the original.  This time the stories involved include "Little Red Riding Hood" "Hansel and Gretl" "Willfull Child" as well as "Death's Messengers" and "The Devil and His Grandmother." Both quality and style vary quite a bit, but even at their least good (none of the tiny plays qualify as bad or mediocre or even average) all entertain. More, each gets one thinking one way or another.

"Death's Messenger" probably makes for the most grim (heh heh) the vignettes, with its tale of someone meeting none other than Death Herself (yeah, in this case Death is a she), who turns out to be a not very nice person. Given her job, much less her nature, no surprise there! Arguably

the most hilarious must be "Hansel and Gretl" in which a pair of Aryan Twins manage to be as horrific as one might imagine on Hollywood Boulevard. Of course their mother steals the show. Just was well that one is chronologically the last. Too much hilarity to try and surpass, honestly.


The one most instantly recognizable must be "Little Red Riding Hood," in which wolf and Red as well as Grandmother (as well as the mysterious bag of goodies) get a very dark and modern twist.

Meanwhile "The Devil and His Grandmother" makes for nice little tragi-comedy. As with all the other playlets of this new showcase for Zombie Joe's take on the world, the acting veered between competent and enthralling. The script itself allowed actors and directors
have a lot of fun--and, perhaps more importantly, to let us the audience join the party!

Honestly, though, much as I did enjoy Grimm Nights Volume 1 (and make no mistake--I enjoyed that evening very much) some part of my mind nagged and said they'll get better. No doubt! Practice very rarely doesn't improve things, after all, and the talent showcased here (and at other Zombie Joe performances) have proven themselves many times. But I found myself wishing they'd do fewer but longer playlets next time.

What I saw was good. It entertained, no small thing! Methinks we (the audience) all walked away very pleased with the time spent in that by-now-familiar black box. People laughed,

sometimes so long and so loud the actors had to pause for a moment or two! We gasped a few times. Once or twice we jumped in our seats. Zombie Joe's group truly understands how to make the grotesque work, how to make such ideas into welcome theatrical events. Kudos to the cast, the writers and the crew who pulled this off! Yet I honestly wished for more. Maybe that is me, being rather...well...greedy.

At the same time I'm really, really looking forward to Volume 2! Cannot tell you how much I long to see
Vanessa Cate (or example) do "Little Briar Rose" aka "Sleeping Beauty." Or Adam Neubauer re-tell "Hans My Hedgehog" Samantha Levenshus create a new version of "Grandfather Death" or Sebastian Munoz make his own "The Boy Who Went in Search of Fear" as well as Matt DeNoto's take on "The Griffin." Mind you, these are only offered as possibilities. I want to whet the appetite of theater-goers as mine has been!


I'm not going to do a blow-by-blow of every single vignette. Such would take far too much time to read! And surprise is one of the delightful tools used for the show. Don't want to spoil that!

Basically, I'm recommending not only this specific show, but sharing the way it makes me anticipate even more Grimm Nights in the future. My hope is, enough of you will help make that possible by showing up!

Posted by Zahir Blue at 5:46 PM No comments: 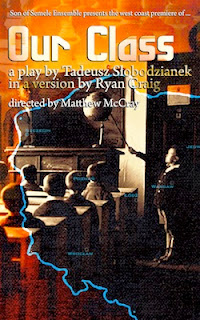 Our Class enjoyed its West Coast premiere last night.  This work, by Tadeusz Słobodzianek, translated by Ryan Craig, focuses on an event little known in the United States. In Poland, however, it hovers over living memory as the murder of JFK does here. The Jedwabne Pogrom happened in July 1941, the murder of hundreds of Jews in a small Polish town. Since this occurred following the conquest of Poland by Nazi Germany, one can understand the initial belief that SS units performed the deed.

Alas, no. They egged on the local Poles, who committed the slaughter. When it finally came to light, the Polish people went into shock and reacted as we Americans often do to the dark deeds of our own history--the lynchings, the murder of Civil Rights workers, the burning of churches with children inside, the white juries that refused to convict those responsible. They (and we) felt horror, guilt, denial, resentment, fascination. All the colors of our common emotional rainbow.

Our Class deals with ten people--five Jewish, five Catholic. We meet them as schoolchildren and in many ways they remain such. "Classmate" they call each other for decades to follow. Technically one of many amazing things about this production is how this cast conveys the range of ages--from childhood to old
age--without makeup.

Yet in many ways that remains their least impressive achievement. 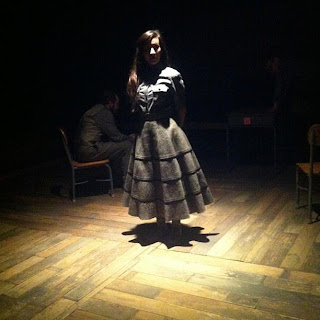 This play delves into its ten characters not from a moralist's POV. Which doesn't mean the playwright had no moral view himself. Quite obviously he shares our own horror at cruelty and murder. But the Christians we meet don't look like cardboard cutout villains, no more than the Jews as pristine heroes. All feel pain, all make terrible mistakes, none comply to some uniform moral gradient. Dora (Sharyn Gabriel) has a shocking but terribly human reaction when her dear friend Rysiek (Gavin Peretti) commits a terrible act. Wladek (Alexander Wells) helps start the massacre, but then comes to his senses and helps save the Jewish girl he always liked Rachelka (Sarah Rosenberg). One would like to think this meant a happy life together, an unbreakable bond. Well, the bond remained. Not as good a thing as one might wish, but neither as bad as it might have been. "Life," as a favorite author of mine likes to say "resists simplicity." Our Class abounds with that very nuance which brings it to life. Even the most vile of the characters (probably Zygmunt played by Dan Via) seems pitiful in some way. Even the most innocent (maybe Abram as played by Michael Nehring) seems self-righteous or sometimes unpleasant. No two of them agree on how to see events, nor how best to respond.

Much of that lies in the script. Did some research and found some critics at its London premiere called this play a one-sided morality play. But honestly, there can be no doubt about the ethics of events! I can only Son of Semele Ensemble production (Semele's son was Dionysus, patron of Greek theatre). 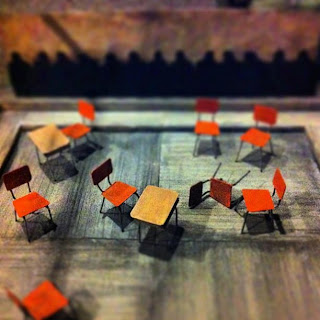 Tis one thing to realize that such nuances exist. Even monsters are human. Victims are very rarely saints. Surviving a horror, even helping make it less horrible, does not automatically equal happiness or wisdom. Evil and good deeds have complex consequences, and even more complex causes. The cast here had to do more than realize these, but bring them to life. They did so with such heart and skill I did what I very rarely do--stand when applauding at the end. As a tribute to what they'd achieved, not least with the finale. Shan't tell you what that entails, but although without any doubt an ending, it also left everything very very open. Responsibility for events and for what to with them in the future were given to those who can (and must) use them most.