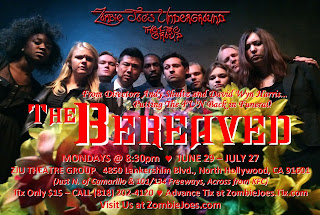 The Bereaved is something new for ZJU--a Monday night show! Which makes plenty of sense when you think about it, because each performance really does only last one hour, making it weeknight friendly in terms of audience. Something to consider!

But how is the show itself?

In essence the whole thing is (quite literally, and deliberately) a dark farce. The Bereaved is around the funeral and memorial service of wealthy businessman Bruce Calhoun (Michael Dougherty). His widow and several former paramours are in attendance, along with friends (sort of) and the deceased's brother James (Jason Kientz). One sees the potential here immediately I trust? Well, happily there's more to it than that even! 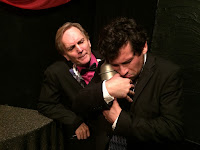 There's a lot to list right with this production, including the script by Andy Shultz and the direction by David Wyn Harris along with Shultz. As mentioned before, the style is "farce" and I can tell you few such every work--mostly because of style. Even when the writing is spot on, most actors have had naturalism taught and re-taught so much the wild sense of over-the-top (but controlled) play that makes a farce work gets lost. At least in this country. Here however we have a funeral parlor director (Doug Haverty) who sometimes flirts with his...er...clients. And the Reverent Wells (Derrick Brooks) who doesn't quite realize whose funeral this is. Or Tiffany (Brenda Nascimento), hair stylist and diva--the latter harder to pull off than one might think, but she succeeds! Frankly, in the hands of a less talented cast many of these characters would come across as nought but a collection of personality quirks and ticks. Instead we get to have the pleasure of genuine (if bizarre) people.

And we laugh! Ultimately, this is the true test of any comedy! More, like most really high quality comedies, this play really functions much like a funhouse mirror. All these people are recognizably human, albeit distorted a bit and heightened enough to make it easier to chuckle. Neurotics, idiots, narcissists, etc.--they are all us, really. Sooner or later, and to be sure blown up into absurd dimensions, but the fact we laugh means we recognize them. Even the two gravediggers at the very start--blue collar workers with barely half a dozen lines between them--are recognizably people.

Kudos to both writer and cast, and to the director who brought them together! 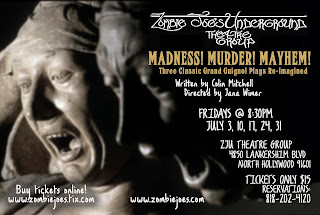 ZJU in North Hollywood would seem a total natural for grand guignol, that visceral style of over-the-top theatre from 19th century France. Madness! Murder! Mayhem! by Colin Mitchell is a trilogy of mini-plays based on that genre, directed by Jana Wimer. Inspired by, but not completely following the conventions. True grand guignol would be much more violent and gory. Instead, these three use more psychological horror--and to considerable effect! I felt as if I were watching a really good horror anthology--which in truth seems exactly what I was doing!

"At the Break of Day" began the evening, with Ken MacFarlane (who pretty much stole it) and Roland DeLeon playing inmates in a French prison. DeLeon's character is due to be executed. His cellmate points out "Madame Guillotine" waiting for her new lover in the courtyard just visible from their meager window. It becomes a game of cruelty between them, the one relentlessly stirring up the other's imagination until at last one or more of them breaks.

"Natasha" Colin Mitchell as an early 20th century English psychiatrist worms his way into Judge Dale Sandlin's chambers for a chance to use hypnosis on a young woman who may have been witness to a terrible murder.  Jonica Patella is the young woman, giving the kind of superb performance I've come to expect. All throughout this I expected some kind of horrible twist. Not only was I far from disappointed, I was genuinely surprised. The dynamics of interactions between these three strangers in particular worked well in establishing a reality, which made the final revelations all the more horribly real.

Altogether an effective and unsettling exploration of horror stories, one that left me very impressed. My mouth smiled. My ears pricked. My skin crawled. What more could one ask for, really?

Inside The Mind of Me (review) 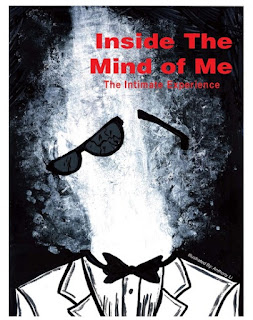 Watching this work, I had very mixed reactions. Honestly the more I thought about it the more mixed they remained. If anything the sensation grew.

Inside The Mind of Me frankly is the kind of work I often really enjoy--a dive into a human mind, where the boundaries of reality and dream, memory and fantasy, hope and despair blur into each other. Playwright Wade Wilson has definitely got talent! But honestly, I don't think the play works.

The essential set-up involves a character named Me (Michael Marcel), in a coma and visited by two friends--Chris (Eric Anthony) and Jessica (Brooke Maroon). Here is my first real problem with the play. Neither Chris nor Jessica ever seemed real to me. Their stories as we went along came across as the kind we should have found compelling. Yet neither one ever became more than a cardboard cutout--not the actors' faults because they seemed talented. Nor, let me emphasize, is this a thread throughout the play. On the contrary, there are a good fistful of vivid, interesting characters including Me's Grandfather Stan ( Marty Hrejsa) and his wretched train-wreck of a father Curtin (Christopher Durbin). 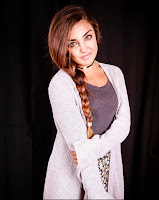 For example, much is made of the fact that Jessica--the most popular girl in school--fell in love during high school with Me, who was shy and considered a sissy, because he wrote a love poem to her. Never once did I understand that. Because she never ever becomes more than a cypher, almost a collection of perfectly logical plot points rather than a human being. 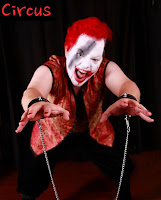 But within the mind of Me we meet a dreamscape a la Wonderland by way of a kind of acid trip, peopled with interesting characters and rather puzzling (in a good way!) characters wondering around. Beyond doubt the best of these were Angel (Kire Horton) a kind of bewinged hippy chick, and Circus (Graydon Schlicter) a demonic clown. Here we get one of paradoxes that I enjoyed most--are Angel and Circus part of Me's mind or do they exist outside of him? I don't know. The evidence could go either way.

Interesting, but less compelling are Death (Erin Braswell) and Loveless (Hollie Sokol) who seems to be an embodiment of primal desires--lust as opposed to love, pleasure before wisdom, the here and now rather than patience. But again, neither one quite became real to me. 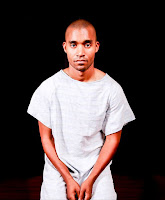 But that might be the staging, at least in part. I found the design and setup generally confusing rather than paradoxical. Given the subject matter is so non-realistic, frankly there's less room for any mis-notes however slight. For example, when difference between the physical and (for lack of a better word) dream world wasn't clear enough to make any breaking of that barrier mean much. The play as it went on seemed more and more about the relationship between Me and Death--but the latter simply didn't have enough to do.

Likewise it frankly felt odd to see this tall, muscular, very handsome young man play Me, who is supposed to have been a 'loser' or nerd.  Not the actor's fault! He did well! But there's simply a limit to how many times you can hit a wrong note before the production becomes permanently muddled. 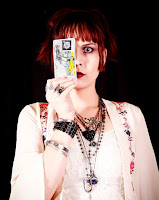 On the other hand, the audience responded very positively indeed! While I found myself seriously annoyed by the on-the-nose dialogue (I saw what the last lines were going to be a mile away and mentally screamed "SHOW DON'T TELL!") people around me almost gave the show a standing ovation! But I do wonder how much of that is due to the inherent charm and charisma of the cast. That was considerable (and a very clever, even needful decision by the director).

Still, in the end I really loved what I thought this play was trying to be. The whole thing bubbled with promise and talent, but in the end for me personally it didn't quite work.
Posted by Zahir Blue at 2:52 PM 1 comment:

Email ThisBlogThis!Share to TwitterShare to FacebookShare to Pinterest
Labels: 2015, hollywood fringe, inside the mind of me, theatre unleased, wade wilson
Newer Posts Older Posts Home
Subscribe to: Posts (Atom)
Chosen as one of the Top 30 Theatre Blogs