This marks my fourth review of a play performed at Zombie Joe's Underground Theatre, the most recent Hamlet which premiered last week.

Blood of Macbeth opened this past weekend and makes for quite a different experience.  First and foremost, this is not a straightforward production of Shakespeare's play.  Rather, we get a surreal adaptation.  Literally, one dives into the unconscious, as if visiting someone's mind as they dream of Macbeth.  Images and ideas bleed into one another, with not-quite a stream of consciousness flow.  Not quite.

At the very start we discover what kind of world we'll be viewing.  Men in what look like prison (or perhaps asylum) garb beat a mannequin savagely.  Is this supposed to be a man.  Such I assumed.  Now that I think on it, though--was it?  Makes just as much sense to assault such an 'idol' or 'puppet' or 'symbol' as a person.  Even what seems like a (symbolic?) rape of the fallen figure makes a kind of sense.  Perfectly in keeping with the original, even.  Much of Shakespeare's plays that deal with royalty are about power.  Who has it, how did they get it, in which ways they might wield it, exactly who and why they lose it.  Power in this case symbolized in loads of ways.  By fire.  By the right to stand atop a blood-red box.  Mostly by obedience from others.  Also, by how others tolerate even welcome extreme behavior. 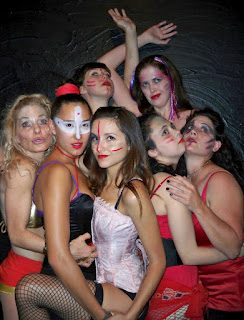 Soon another factor makes its appearance.  Or their appearance I should say.  The witches, called "the weird sisters" in the original text.  Far more than three this time.  And here we find a pattern worthy of note.  Not only are these witches the veritable Greek Chorus in terms of the play, but as well the only female characters to be found.

That's right.  No Lady Macbeth.  Or, more precisely, both Macbeth's have been combined into one character.  Michael Blomgren seems to be having a blast as a monarch whose real power derives from the sponsorship of the female side of the world.  When he's enthroned as King, for example, the men offer Macbeth a heavy masculine crown.  But the weird sisters (whom the men usually cannot see) offer a lovely little tiara.

He choose the tiara.  Yeah, 'tis hilarious.  But also makes perfect sense.  This Macbeth rules as both both King and Queen.

The bizarre resemblance to The Joker fits as well.  But that might be coincidence. 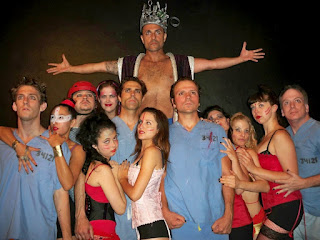 Either way, this souped up frenzy of a show doesn't really allow you time to think and try to figure stuff out.  Director Josh T. Ryan keeps the play going like a roller coaster, the gags and dreamlike digs more or less constant.  Interestingly (and I think tellingly) only one female cast member is really a character. Chelsea Kurtz portrays the Murderer, as something akin to a Geisha and an Indonesian dancer (the hand gestures seemed to echo such anyway).  She is the one who kills Banquo, not in the straightforward slaughter of the men, but by temptation and trickery.  For the record, she's funny.  The smile she effects says worlds about how this Murderer likes her job, gloats over how Banquo will die at her hand, because she knows things.  Things no one is supposed to know, but of course someone nearly always does.

Not for everyone, to be sure.  But among other things this production makes one of the best pieces of performance art I've seen in a long while.

All photos courtesy of Zombie Joe

Posted by Zahir Blue at 3:41 PM No comments: 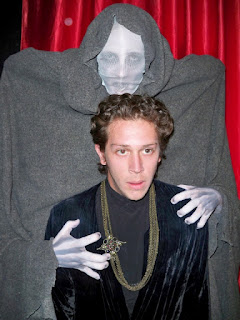 At this point I usually say Spoliers Ahoy, but honestly that seems a tad pointless when writing about a 500-year-old classic.

Zombie Joe's Underground Theatre has mounted Shakespeare's most famous play for their 20th Anniversary.  Hamlet, Prince of Denmark remains a milestone in theatrical history.  Many classical actors of a certain type end up judged by their performances in the lead.  Those who've done so make up a veritable Who's Who of fame, running the gamut of types--John Gielgud, Edwin Booth, Lawrence Olivier, Richard Chamberlain, Dirk Benedict (I'm not kidding), Derek Jacobi, Kenneth Branaugh, Richard Chamberlain, Mel Gibson, Kevin Klein (my personal favorite), Keanu Reeves, Alec Guinness, etc.  Like the "Mona Lisa" it becomes tricky to see the play for what it is.  So much hooplah surrounds it, one almost pities the cast forced to try their hand.


Mind you, it remains a brilliant play in part because the roles prove so difficult.  For example, I've only seen one performance of Polonius ever that struck me as really good (Ian Holm, if you're interested).  The role fairly brims with traps for the actor.  On a certain level the man seems like a clown, yet remains a powerful and trusted counselor to Kings, one capable of admitting to a seeming terrible error in judgment to one of those Kings without really trying to defend himself.  Very, very tricky part.  ZJU's Polonius, like virtually every other actor I've seen play the part, failed to make him real. 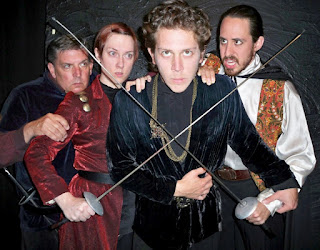 But the most important role in this play remains the title character.  Get a good Hamlet and the rest of the cast need only deliver acceptable performances.  Rafael Goldstein is their Prince of Denmark--and he delivers!  Admirably!

Madness stands as a challenge to almost any actor.  The temptation to portray such as nonsensical ramblings remains great--not least in this role because Hamlet does exactly that.  He himself is pretends to be mad, spouting bizarre claims and ideas seemingly out of nowhere.  But the great secret of the role remains that he pretends at insanity while undergoing a genuine nervous breakdown--which he tries (often successfully) to hide.  Quite a balancing act for almost any actor.  Mr. Goldstein succeeds at it, and more achieves that which all too few actors (especially Americans, sorry to say) seemingly can--he makes Shakespeare's elevated speech his own.  Fundamentally, this means he knows what he's saying.  Alas, the young man portraying Horatio evidently did not.  I literally could not make out over half his lines.  Partially his diction sounded less crisp than I like, but there seemed a more fundamental problem.  He emoted, then let the words flow out of his mouth.  But that isn't how we talk.  Especially to each other.  Instead of concentrating on feeling, he frankly should focus on what he's saying and let the emotion flow from there.  (This is a common problem in actors doing Shakespeare--grabbing an emotion and in effect vomiting out the speech instead of talking.) 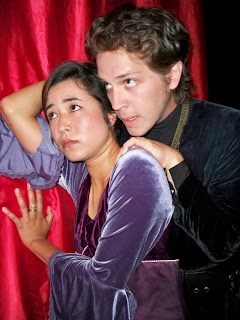 Maya Erskine has the enviable/daunting task of portraying Ophelia, one of the Bard's most difficult parts, mostly because of its length.  Or, more accurately, its brevity.  She has three scenes, one of which she spends insane.  Within those scenes she must convey the depths of her feelings for all the major characters in her life--father Polonius, brother Laertes, would-be lover Hamlet.  In effect, she gets two scenes to explain what drives her totally mad by the third.  Erskine might have missed a few opportunities here and there, but she accomplishes the part quite well.  No small feat!

Technically, she gets little help from her Polonius (again, one of the hardest roles the Bard ever wrote) or her Laertes.  This latter falls into much the same trap as the actor doing Horatio--lack of specifics.  My companion for the evening assumed Laertes and Ophelia to be lovers, not siblings.  A good example of how physical affection should feel differently based on specific relationships.  Likewise, because he played only the surface meaning of this lines, this young man's sudden confession and begging pardon at the end came out of nowhere.  He gave us no hint of any doubts, any mixed feelings on his part, the slightest clue he might do such a thing.  Granted, such is not easy given the structure of the play (I had a teacher once who insisted Shakespeare never got a chance to give this play a final draft) but it remains his job to do it anyway. 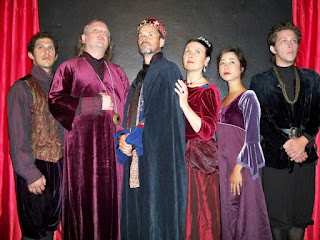 Given how most actors do Shakespeare, the rest of the cast did quite well.  In terms of casting, director Denise Devin quite accurately put the heavy guns in the roles where they belonged.  Almost everyone did at the very least a nice workmanlike performance, which while not deserving a lot of praise should still be commended.  Lots of actors in major films and t.v. shows didn't do half so well.  Hardly anyone didn't have some moments when they didn't shine, bringing vivid truth onto the stage with their talents and skills.  One in particular, Vanessa Cate, did a riveting job in each of four roles.

Hamlet plays Fridays at 8:30pm and Sundays at 7pm from July 6 through August 12, 2012 at Zombie Joe's Underground Theatre Group, 4850 Lankershim Boulevard, North Hollywood (818) 202-4120.  I strongly recommend this production as a superior one at its heart.
Posted by Zahir Blue at 7:56 AM No comments: