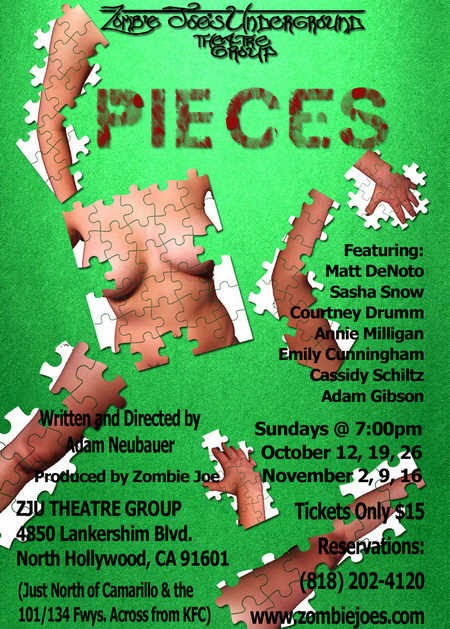 Very rarely I get the pleasure of seeing the world premiere of a play (or at least its initial run) and then a later production of the same work. This last weekend I got to have such a treat, with Pieces by Adam Neubauer at Zombie Joe's Underground Theatre.

The whole premise of this show screams "dark comedy." John (Matt DeNoto) has plunged into drunken, half-crazed grief after his girlfriend Chrissy leaves him without warning. His almost entirely female circle of friends gather round to offer support. They rightly fear he'll do something desperate. Alas, their fear remains a tad off target. Once a delusion enters into his head that all his friends have pieces very much like Chrissy's, a sick and psychotic solution to the break-up rises to the surface of his none-too-stable mind.

What follows could easily become grand guignol grostesque, but never quite does. Never even reaches the stage of Sweeney Todd. More like Little Shop of Horrors but minus any hint of alien carnivorous plantlife. Minus as well the lonely sweetness of the loser Seymour. Rather, John turns out to be someone with some genuinely serious issues--and the humor works most because his issues remain pretty much identical to those of his friends. An inability to connect. A certain selfishness, sometimes passive aggressive, sometimes not, but often fueled by projection instead of listening. They all seem lonely, all wanting more, none of them really having a good idea what to do about it--but John cranks up their failures and foibles all the way to eleven and tosses away every marble he may have possessed in the bargain!

Something like this demands a nice balancing act between genuine humanity and a certain remove. If we care too much about the characters, the play turns into softcore torture porn. If we don't care all, ditto. Generally the script accomplishes what it needs to, and very well. The cast help. A lot! Consider for example Adam Gibson as Gus, John's seemingly lone male friend who's also quite gay, quite bitchy, and morally rather dark himself when all ends up said and done. Gus shows a certain flamboyant edge, without going all drag queen or over-the-top. Yet we don't quite believe in him, which is rather the point. Comedy usually (with rare exceptions) depends on a certain amount of alienation between us and the cast. When he finds his friend John murdered Patty (Courtney Drumm) the reaction needs to fit with the rest of the play. Not too casual. Not genuinely real (lest we think him a sociopath). But slightly cartoon, with a
few dashes of musical theatre and/or sitcom. Just as Drumm needed to be both the most naturalistic yet also least rounded or sympathetic of the friends. Her death helps us start leaving the Real World behind.


But this story rests squarely on whoever ends up playing the characters of John himself and the genuinely nicest, most caring of his friends, Mary (Sasha Snow). Everybody else was fine. All entertained. Each one did their jobs with competence (that is anything but a put-down, plenty of paid professional actors fail to manage that level). Yet it is DeNoto and Snow upon whom the play depends, especially during the climax. For one thing, Mary creates a comparison, leading us to not care too much about the others. For another,
Snow has to make the finale (which reminds me of the very end of Rocky Horror) work in its eerie power. In a twist worthy of the Twilight Zone, John's creation lives--and the consequences are of course nothing at all as he expects. In a weird way, it even feels hopeful. And just. Kudos to Kevin Van Cott for the music that plays at the end, which adds to that finale's power.

At the same time DeNoto provides nearly all the humor and gets the most stage time. He frankly made me burst out laughing as his descent into madness took the form of just paying attention to certain body parts. Doesn't hurt that DeNoto has piercing dark eyes.

The final result is a bit more than simply a dark comedy, because by the time the show ended I had done more than laugh. 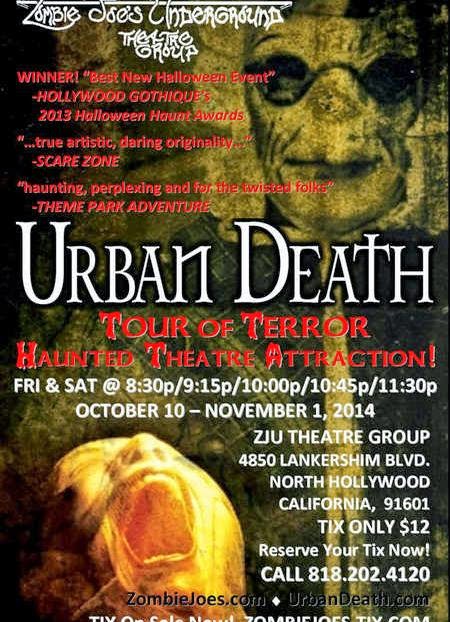 Not really. I'm not going to spoil anything because that would decrease the fun of anyone deciding to attend. Well, maybe a couple of details.

For years Zombie Joe's Underground Theatre Group offered thrills and chills and more than a few visceral reactions via their signature piece Urban Death. Last  year they tried turning it into a Haunted House for the Halloween season--to great success! This year they're at it again!

Once again, they've created an experience utterly unlike the tame semi-roller coasters that revisit horror movie tropes so common in this kind of event. I can firmly say we don't see anyone remotely resembling Count Dracula or the Wolf Man or Freddy Kreuger, much less Jason or Frankenstein's monster. No lab equipment with colored water and dry ice. Not even a faux chainsaw.

What do we get instead? Stillness, for one thing. Stillness that begins to erode at one's peace of mind, not least because we sense it remains only a pause. Darkness for another, one we know down to our souls cannot possibly be empty. Humor, of some very dark and perverse shapes (honestly, I get into a zone for things like this to avoid too strong a reaction--and I could not control myself now and then. Really.) Blood. Death. Cannibalism. Full frontal nudity. Some things not really human at all. Voices that scrape against the spine and groans that hint at atrocity. Gasps of pleasure and pain. What could have been insanity or perhaps just demonic possession. Or both, to be fair (honestly, if you were possessed by a demon might not you suffer some mental problems?).

Apart from the content, which I understand is something of a collaborative effort, much credit should go to the cast for what certainly seems a grueling performance piece given to us with no holds barred, nothing held back.I recognized several performers from other shows, but others remain anonymous. Some because of masks. Or their equivalent.

Bottom line--if you want genuine creepiness, real scares, your nerves on edge was well as some pitch-black (as opposed to merely 'dark') humor, this is the Haunted House for you this Halloween. Adults only, though. Really. I mean it. 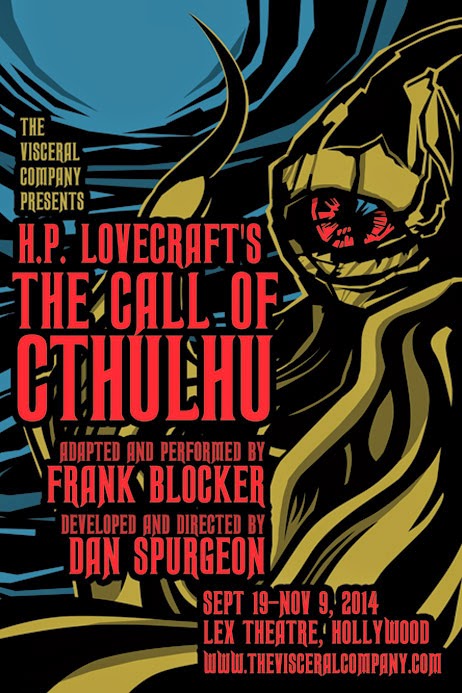 Note: Call of Cthulhu has been extended until December 7

Let me begin by noting I'm very familiar with the works of H.P.Lovecraft including his seminal work The Call of Cthulhu. I've seen and heard it dramatized as well as reading it many a time. So although remaining a fan of actor Frank Blocker as well as of the Visceral Company in Hollywood, I didn't really expect any surprises. Just a very good one man show based on a story I know and enjoy.

But I got more!

For one thing, Blocker shows off his skill at portraying vivid and different characters at the drop of hat. His rapid transformations, from nervous artist to hard-nosed Louisiana detective to elderly explorer and Norwegian sailor, frankly demonstrate enough talent to make the price of a ticket worthwhile (at least if you're enough of a theatre geek as yours' truly). About those characters, allow me to point out each has a complete life. They aren't a set of accents and body languages merely but entire personalities with a their own world views and goals. No small feat!  As the narrator, of course, all that is at its most subtle because he has the most time. This also acts as an extremely effective red herring...

I also want to praise how the play delves beyond the surface of what we might expect. At the same time, despite the disclaimer above, revealing spoilers isn't what I intend. So let me just say this adaptation remains very true to Lovecraft's spirit, if not always to his precise words or plot. If you look at the poster as well as the credits in the programs you'll see Dan Spurgeon (co-founder of the Visceral) as having developed and directed the show. In doing so he went beyond the simple idea of having an actor just read aloud the story. No, what this ended up becoming proved far more theatrical than literary, and (true to the company's name) visceral in terms of the actual story. To give a single clue about the ways he accomplished this, let me say one word. Puppets. 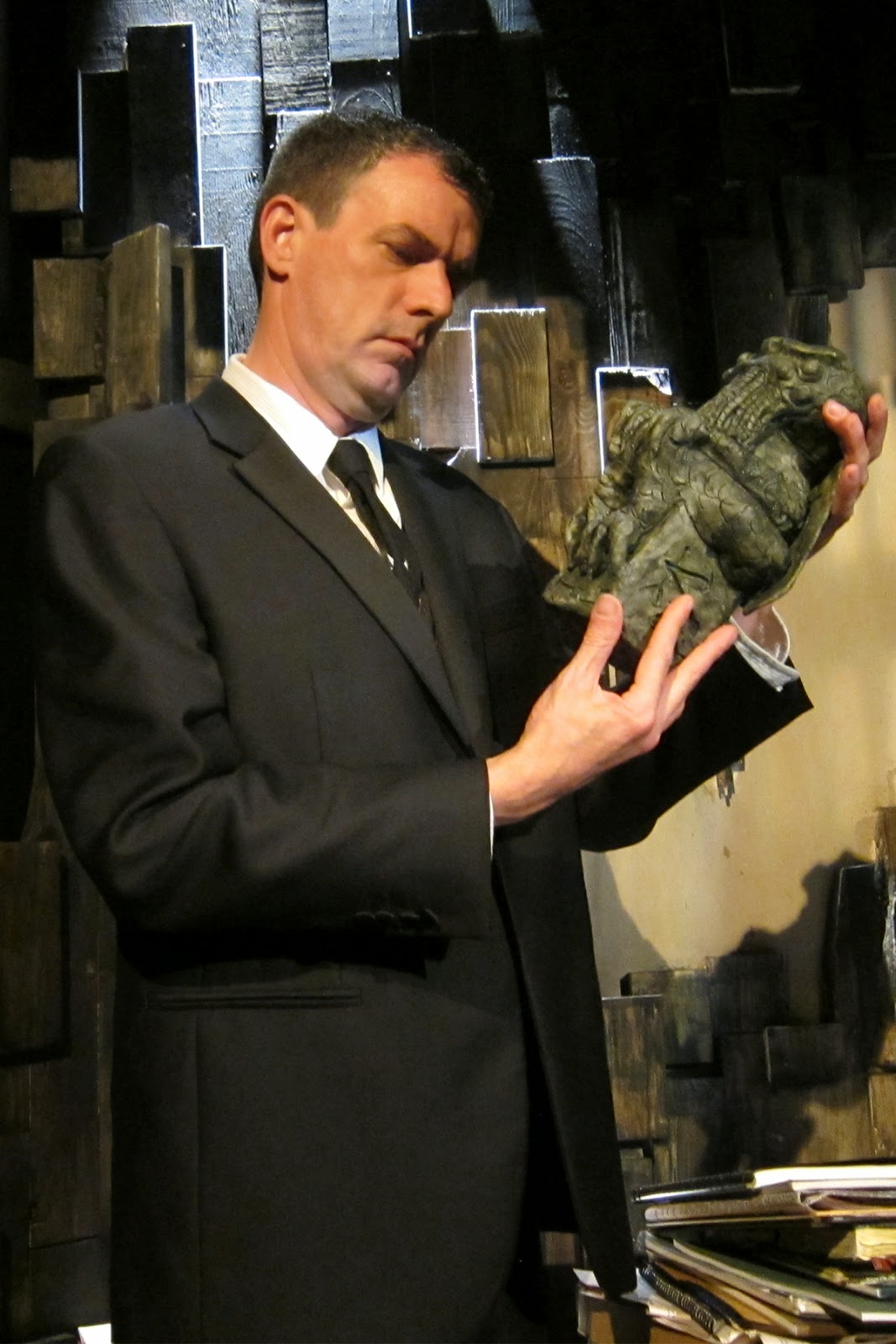 The Call of Cthulhu makes for an unusual mystery story, because while crimes have been committed and our narrator to some degree manages to solve the identity of who and why, that is not the mystery which remains at the story's heart. Rather, it consists of an existential odyssey. A man explains to us how he got into archeology, via the enchanting tales told by a distinguished uncle in the field. Upon that uncle's death, he goes through the old man's papers and discovers clues of...something. What precisely? A hidden religion? Secret society? Maybe a horrible truth lying behind both? Why, after all, would cults follow the same rites and seemingly worship the same grotesque deity thousands of miles apart? Even to the point of having the same idols, and muttering the same words (if they be words) in something resembling no human tongue? Who or what is/was this...entity/demon/god/alien...called Cthulhu? How did people come to believe in such a thing?

Lovecraft was himself an atheist, and that likely helps account for his coming to invent much of what we might as well call "modern" horror. Before him, before Cthulhu and the stories set in his cosmos, evil's target and goal was the moral corruption of human souls. Or so tales like Dracula or The Picture of Dorian Gray would have us believe. At worst, we might be their physical prey, or perhaps in stories like The Turn of the Screw maybe a non-existent symptom of mental illness. Maybe. But Lovecraft grew  up in an age where we'd begun to get some idea as to the titanic size of the universe in which we inhabit. Cthulhu and his kind, the Old Ones, barely notice humankind even exists. We are less than ants, less important than harmless germs, to Them. We are, in the words of Douglas Adams, "an invisible speck on an invisible speck."

We are nothing. And shall be treated accordingly. Realizing that is the horror our narrator confronts--and with which he must find some way to cope.

Making that narrative fresh, as this production manages to do, also brings that horror much closer to home. I laughed at the last moments of this production--not from a gag or witticism, but from choosing between that or letting the horror overwhelm. There's a joke, but the joke is on me. And you. On all of us.

I don't want to give too much away, but it bears repeating I was surprised. As well as thrilled. Once again I got a compelling show from the Visceral, and from Mr. Blocker and Mr. Spurgeon, and recommend their show as a very tasty Halloween treat (and trick).

H.P.Lovecraft's The Call of Cthulhu plays at the Lex Theatre (6760 Lexington Blvd, near Highland, just off Theatre Row) Fridays and Saturdays at 8pm and Sundays at 3pm until December 7, 2014. Tickets are $20 each.
Posted by Zahir Blue at 3:39 PM No comments: