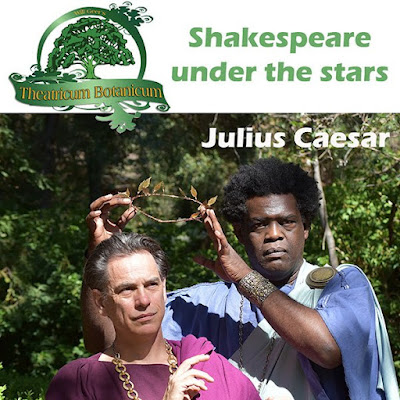 So lovely to begin reviewing live theatre again!  First up, a Shakespeare at Theatricum Botanicum, Julius Caesar which lends itself to political messages and has done across centuries.

There are a few traps in this play, and few productions avoid them all.  Must stay this one fell into several, so that (as per usual) the first part of the play is in many ways the least interesting.  Yes Cassius (Melora Marshall) seeks to persuade Brutus (Christopher W. Jones) to join a conspiracy to slay the title character.  But why?  That needs to be absolutely crystal clear via performance or we frankly have little reason to care. Instead, this production in this part of the play substitutes energy for purpose.

Instead--and this frankly sent a chill down my spine once I realized what what happening--we get a Narrator (who doubles as the Soothsayer eventually) who tells us in modern language exactly what is happening in each scene, up to and including how characters see one another and what their personal hopes are.  I honestly hated this.  No blame to the actor, who has a pleasing manner as well as fine stage presence, but one of the great strengths of Shakespeare as a playwright is that he leaves the decision making about what we're seeing to the audience!  He does not tell the audience how to interpret events!

Frankly in my mind this stunt shows a profound disrespect to both author and cast.  Neither to my mind was justified.

To be sure, this was not the best production of this play I've seen, and as ever they (quite properly) cast as dynamic a figure as Mark Anthony as possible (Michael McFall) who after the assassination is literally given one of the best scenes ever written to steal an entire play.

Such is the biggest trap of the play, trying to make anyone else the equal of Anthony after the funeral speech.  That is so hard.

I honestly believe the distrust of the cast seems to have hindered most of the first half of this (greatly reduced for length) show, but give them all credit for coming into their own during the second half.  Then I finally cared about the conspirators.  I felt something about their fall.

Yet I remained irritated at this nice man wandering around on stage telling me what just happened as if I could not figure out for myself, and worse, telling me how to interpret the play!

Posted by Zahir Blue at 2:15 PM No comments: