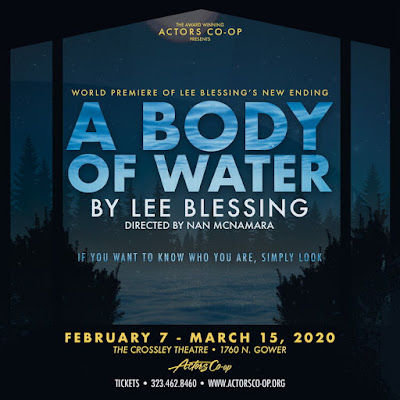 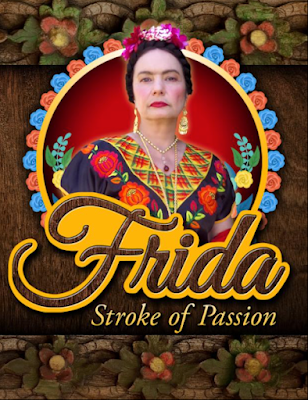 Frida Kahlo (to use the super simplified version of her very lovely name) easily counts as one of the most fascinating human beings to breathe during the twentieth century--and that is not a low bar.

Frida - Stroke of Passion, produced, written and directed by Odalys Nanin (who also plays the title character) functions as dream-like retrospective of her life in the week before her death.  It is her 47th birthday, and she lives sheathed in pain.  Yet she remains devoted to her art, lingering on memories of her many lovers, fierce in her demands for attention from her husband Diego (Oscar Basulto), and scheming to leave this world and fly.

There's a lot of content here, and frankly teases one into learning much more about the figures in the life of this unique personality.  Yes, we've all heard (haven't we?) of Leon Trotsky (Paul Cascante) and Josephine Baker (Celeste Creel).  Perhaps unusually for a gringo I have some idea of who singer Chavela Vargas (Sandra Vallis) is.  But I had to look up movie star Maria Felix (Jorie Burgos), Cuban spy Teresa Proenza (Kesia Elwin), and photographer Tina Modotti (Mantha Balourdou).  Quite a tapestry of lovers--and honestly such makes up only a portion of what makes her life extraordinary.

All of which combines into a narrative of Kahlo's last days, and her memories of a rich life, coupled with her machinations to leave this world on her own terms, just as she has lived in it as she saw fit.

Nanin's script functions extremely well on this level, and at time soars to splendid heights (entwining songs into the show was a brilliant choice).  But honestly it felt almost too short, or too long.  Some more exploration of what was there feels needed, or cutting away some details to give greater focus.  Maybe both.  Still, while I truly miss learning more about Kahlo's actual art (which can be wildly difficult to dramatize, to be fair) that we get a portrait of this artist seems beyond doubt.  Her loves, her passions (not quite the same thing), her disappointments and regrets, even her ghosts (a couple pretty much literally just that)--such makes an intoxicating recipe of Frida Kahlo's life, and if the play cannot tell it all, well how much of such a life can be told in one evening?  There's a lot there to whet the appetite!

This production, by Macha Theatre/Films, is a revival and somehow I doubt the rest of the audience doesn't join me in hoping for yet another revival--one of many. 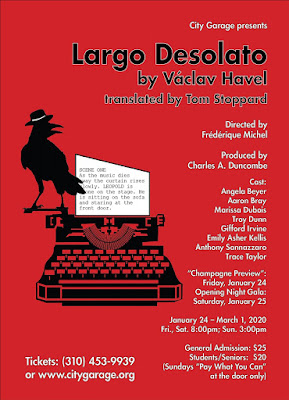 Leopold Nettles (Troy Dunn) is a philosopher in an un-identified country (but we can be pretty sure is Soviet Czechoslovakia), waiting to be arrested by the Secret Police.  When the lights come up, we see him sitting on the sofa in his apartment, sitting and staring at the door in quiet terror.  He reacts at to the slightest sound--sounds we in fact do not hear.  Approaches timidly the door to stare through the peephole.  Seeing nothing, he retreats again to the sofa.

He does the same thing again.  And again.

That should be dull, but instead becomes nerve-wracking for us, the audience.  So begins Largo Desolato by former Czech president and playwright Vaclav Havel, translated by Tom Stoppard, directed by Frederique Michel.  Written after Havel himself emerged from prison, the play proves a harrowing portrait of slow psychological torture, as an essentially good (albeit very flawed) man of deep thoughts and lofty ambitions is whittled away before our eyes.

Part of what makes the whole thing so compelling are all the other around Leopold, all of whom exert pressure, all of whom share the same knowledge of his impending fate.  A few, such as his girlfriend or maybe wife Suzana (Emily Kellis) --the text does not make it clear--offer simple, straightforward support.  He finds little comfort there, but then who can blame them for also withdrawing at least a bit?  His friend Edward (Gifford Irving) is there, checks up on him, is friendly--and then takes Suzana out to the ballet.  We soon learn Leopold drinks too much, takes drugs, cheats on his girlfriend with a friend of hers Lucy (Angela Beyer) while refusing to show her any public affection or simply say the words "I love you" without going into a long speech about how he doesn't mean what she does by that word.  He tries to be polite, but that crumbles soon enough.

Likewise he must deal with Bertram (Trace Taylor), a colleague in effect delegated by others to check in on him--not to offer much comfort to express concern he will break, that he will fail to meet their expectations, that he is no longer the man he once was.  In effect she dissects what he himself feels has become under the weight of waiting.  Word for word as it turns out.

Remember that fact.  Because certain phrases repeat themselves over and over throughout.  He speaks of love as if quoting a specific essay.  When he talks about what he fears he is becoming, he repeats Bertram's paragraphs--more than once.

When a Marguarite (Melissa DuBois), a young student, comes to see Leopold out of raw fandom, she likewise repeats word for word what Lucy said about her feelings and hopes in loving Leopold.

Compelling it is, and more than a little mysterious.  And as he goes through the motions of his routine of subtle, grinding terror, wearing nothing but pajamas and a bathrobe, drinking more and more rum, popping more and more pills (in lots of vivid colors), a disturbing question arises.  How much of what we're seeing is real?

Intriguingly, I don't know.  Some of it seems clearly a kind of hallucination, yet other parts might well be real.  When the secret police (Aaron Bray and Anthony Sannazarro) do show up, he momentarily becomes the strong, even compelling man that makes it clearer why so many depend upon him, as well as why a dictatorship might make him a target.  That too seemingly crumbles as they make him an offer to avoid being taken away--an offer which clearly tempts.  But he doesn't take them up on it.  Is this his vision of what he hopes to be but fears he will become?  Or is this real in some way, a fractured memory?

More importantly, does it matter?  Leopold's crisis itself remains real. If in fact much of what we see happens to be his own mind, that implies a piercing amount of self doubt as well as self-delusion.  If the repetitions are merely style, then we get the same effect in many ways--the chipping away of himself under pressure.  Just like his constant, terrified vigil of watching and listening to his own apartment door.

Little wonder he'd rather be taken away to "that place" than live like this.

As ever City Garage surprises and haunts.  Every cast member of Largo Desolato is a veteran of the company now, and deliver their performances with power as well as precision.  The direction continues to use the (seemingly) simple presence of being in the same room with another human being to vast effect.  The result feels raw, and terribly honest.