For the Loyal (review) 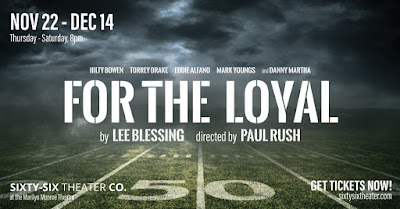 Walking into the Marilyn Monroe Theatre, my heart fell a little bit.  The set looked like a football field.  Not sure if I can make it clear just how visceral my distaste for football truly feels.

Yet I found For The Loyal by Lee Blessing very compelling.  Even beautiful in a heart-wrenching way.  It does what most really excellent drama does, in this case very explicitly.  At the heart of the story is a seemingly simple question--and leaves it up to the audience to come up with their own answer.  But only after we've had all the easy ones stripped bare.

Football just turns out to be a setting, as well as a metaphor.  Toby (Torrey Drake) is an assistant football coach at a university, and in a panic tells his wife Mia (Hilty Bowen) of walking in on a revered senior coach named Carlson (Mark Youngs) with a naked underage boy.  He did what in theory is the right thing--inform their boss Coach Hale (Eddie Alfano).

Hale's reaction is more--and less--complex than one might expect.  He demands Carlson's resignation, pretty much threatening the man with maximum exposure in court if he fails to comply.  Carlson, protesting his innocence (poorly) all the while, complies.  As Hale puts it, now he is someone else's problem.  But of course he's doing nothing at all about the problem of a pedophile on the loose.  That isn't even part of the picture.  Keeping this a secret, not causing a scandal, protecting the university in general as well as the football program in particular, that remains the only real priority.

Toby, however, had disobeyed his boss and told someone.  He told Mia.  Thus the play moves away from the men into the lap of a woman--an outsider whom they openly mock for her major of Comparative Literature.  Someone without any real devotion to the Program.  Her husband, the father of her unborn child, he is the one whose career remains entwined with the program.  Over and over he begs Mia to not say or do anything to offset that career, for her sake and their child's sake.  At least that is what he says.  Maybe he even means it.  To some degree.  A lot, quite possibly.

Mia, however, feels far more torn.  At some point (exactly when never becomes clear, a good thing in my view) we enter her imagination as she plays out all the different scenarios of what she can do.  What if she shoots the man dead while he's in her home?  What if she tries to go to the various officials of the university, or to the local police?  What if she simply goes along with the Program?  Or what if her husband never ever told her what he knew in the first place?

Along the way we meet the Boy (Danny Martha) in question, homeless and cynical, not caring about the truth because he cannot afford it.  He becomes in time an avatar for all the possible victims of Carlson, taking turns in haunting her with Carlson, like a tag team horrific version of the ghosts in A Christmas Carol.  He becomes the voice of a her best friend in high school, who furiously rejected Mia's suspicions of that friend's father until admitting all in a suicide note years later.  He stands in for Mia's son, who on the one hand despises her as a murderer who has tainted his entire life, and/or becomes the target of Carlson himself or some other such predator.  Director Paul Rush does a fine job of helping this whole dreamscape of the play work, never allowing anything to be totally simple or straightforward.  Mia's impotence before the status quo, the Program, which demands loyalty before law, before justice, before the fate of children, grows like a mountain.  Or at least Mia sees it that way ever more clearly.  Even her experience with her high school friend is not viewed as evidence of her insight, but rather proof of her her prejudice.

Think about that for a few seconds, and shudder.

For the Loyal plays Thursdays through Saturdays at 8pm until December 14, 2019 at the Marilyn Monroe Theatre 7936 Santa Monica Blvd. Hollywood CA 90046.