Astroglyde XX is the latest show from Zombie Joe's Underground Theatre Group in NoHo.  Followers of my blog know this is a group I have the good fortune to attend fairly regularly.  Most of its performances I quite enjoy, sometimes a lot.  A few I haven't really liked that much. 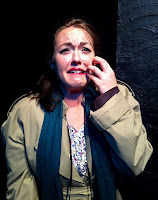 This one consists of a nine monologues, each written and performed by some actor.  I recognized nearly every one as someone seen before at Zombie Joe's.  "Snap, Click" for example starred Cory Wyszynki, the lead in Not With Monsters this last October.  When the lights come on, his was the first monologue we watched.  Almost a stream of consciousness by a police officer's

son with a fierce temper which he uses to cope with some powerful personal demons.  It worked, and worked well.  But was better written than acted--not because the acting wasn't good but because the writing seemed much better. 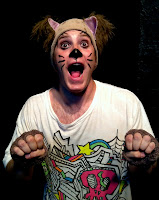 None of the acting in any of these mini-one-man-shows ever became bad.  In fact, sooner or later I found each compelling.  The range of styles also turned out pretty impressive.  Ren Harris for example, in "The Addict" gave hints almost from the first word out of her mouth where her vignette was going.

Two monologues were from the POV of dogs.  Really.  As in canines.  Each very different.  Willy Romano-Pugh's piece choked up more than a few members of the audience, a spoken anthem by "The Dog" on behalf of his beloved (and abusive) master.  The second, "Murray" by Robert Walters, captures the last moments of a happy life of a dog as he saves a child. 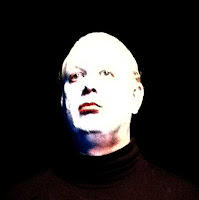 What have all these got in common?  Several answers come to mind when thinking about that.  Hope, love, desire, loneliness--the stuff of life really.  Snapshots of humanity (or caninity) that capture all the complexity of what actually breathing entails.  Okay, one has little to do with humans per se.  "134340" by Leif La Duke may be the most original of the group, since it involves a conversation between the planet Pluto and all five of his (its?) moons!

But I felt for him too, the great big piece of rock and frozen atmosphere.  Why not?  Who hasn't felt the sting of others' opinions?  "Down In The Dumps-ter" by Laura De Land features that very pain, and how it can lead to tragedy.  Like a few other performers in this, Miss De Land sometimes gets a little frantic in her pacing.  Opening night jitters, most likely.  Hers was the second most harrowing piece of the night.  I just

couldn't see her character ever finding a happy ending short of some form of extreme amnesia, putting her past far far away.  But "Bumble's Rambles" was if anything even more bleak, yet ended with more hope.  Tucker Mathews played a home economics teacher, seemingly the only survivor of an atomic war, broadcasting music and ramblings out into the air for...what?  To simply say he's alive.  To

insist despite everything he hasn't given up, even though despair clearly remains closer than his shadow.

One of the monologues that is not too frantic, simply because that pace is part of the whole piece, is titled "Re Shane" by Chelsea Rose.  Her title character gives a portrait of this fearless, voluptuous woman taking a deep bite out of life and daring others to join the meal!  Manic?  Yes.  Insane?  Possibly.  But without a doubt, glorious.

The final show of the 70 minute performance, "Muches Ado About Nothing" finally made vivid what all the others implied.  Since we're all fools, all clowns, what about those who actually dress the part?  In this case Mark Nager as the clown Muches.  He wanted to do magic.  And what he shows is that he still can.
Each little vignette had its own director, many of whom I've seen before--from Zombie Joe himself to Vanessa Cate, Adam Neubauer, Jana Wimer, Roger K. Weiss and Sebastian Munoz.

I recommend Astroglyde XX for anyone in the mood to be touched by nine sad, happy, wise, foolish lives--each of whom may stop your heart for just a split second or two.

Performances run Fridays at 8:30pm until December 14, 2012 at Zombie Joe's Underground Theatre at 4850 Lankershim Boulevard in North Hollywood.  Tickets are $15.  For more information check out their website or call (818) 202-4120.  All Photos by Adam Neubauer
Posted by Zahir Blue at 5:31 PM No comments: