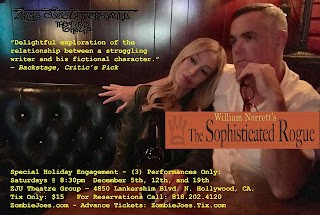 I can with confidence say The Sophisticated Rogue surprised me. One glance at the postcard and an image arose to mind--of a Writer spending some time with a Creation, a character who has come to embody something within her life. Yeah, I thought the writer in question was the lovely blonde to our left.

What I got was more frenzied, a lot funnier, with a much larger cast and a deeper disruption over just what might be real or not.

Please don't imagine for a moment this constitutes a complaint! 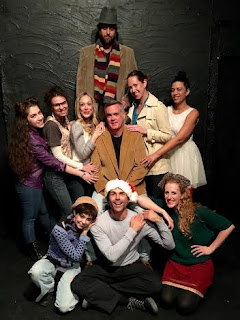 What we (the audience) got instead was something not unlike a dream, in which our author Bill (William Norrett--ironically enough our real author, as in the playwright) finds himself arguing with his character the Sophisticated Rogue (Josh T. Ryan) over the latter's over-the-top monologue about how many five year olds he can pummel before they overwhelm him with numbers. It is dark and funny, and we do indeed comprehend why Bill feels a tad uncomfortable in the company of such an uninhibited character. From there we eventually learn that Bills ex-girlfriend Delia (Michelle Snyder) is now suring for custody of the Rogue, given that she helped Bill create him. That Delia actually represents fictional characters for a living gives a pretty good hint about the world of this play.

In fact, I'm didn't walk away certain this play was even set in a world (for the most part) but may in a rambling waking dream on the part of Bill! After awhile all things seemed to be one metaphor piled onto another, up to and including a Professor (Alex Bartley) interviewing the women in Bill's life, treating his day to day existence as a work of art in and of itself. Hence Olivia Power is University Period, Alisa Vilena Gerstein his High School Period, Lauren Velasco his Blue Period, etc.  Eventually we even meet the actor (Michael Blomgren) who gets to play the Rogue on stage. Likewise Christa Davis ends up playing a variety of characters include a Critic.

The thing that saddens me is that only two performances of this wacky, gentle mind-f***k remain.  Because I'm sure a lot of folks could get something genuinely fun and weird and entertaining as well as thought-provoking out of this show.

Honestly, how often can you say that? 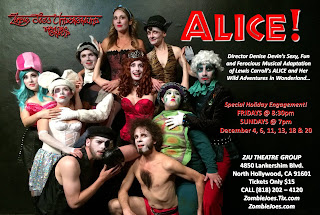 Lewis Carrol, history shows, was an odd man. Not as weird as maybe you've heard, but eccentric to say the least. His children's books inspired movies, artwork, ballets, t.v. shows, novels, documentaries and not a few stage plays. Like Alice, one of the latest offerings by Zombie Joe's in North Hollywood. 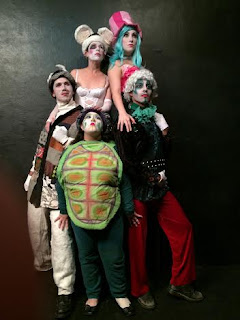 With this news, Alice's quest to kill the Queen of Hearts begins. It will be neither straightforward nor easy nor without a certain amount of sexual shenaniggans.

Central to the story is the Cheshire Cat (Jonica Patella) who's the first character we meet. Frankly, I think many are the often-quite-good actors in LA who can learn from her total selling of such a bizarre character. The second the lights come up we can feel the energy flowing from her eyes and smile. Fortunately the rest of the cast follows suit, including Gloria Galvan (the Mock Turtle, along with other parts--a standard for this show) who remains fearless as ever on stage, Daniel Palma as Humpty Dumpty (who "sells' a truly bizarre song from a top his wall) and Ellen Bienenfield as the Dormouse. Other members of the cast include Cat Cela as the Mad Hatter and Starskee Suave as the Blue Caterpillar. But I honestly think maybe Jana Wimer (director of more than one Urban Death at ZJU) as the dual role of Alice's sister (if you know about the real Alice Liddell's sister this presses a few buttons) and the utterly mad Queen of Hearts--and she was clearly having a ball doing the latter!

But what I really want to make clear is how the show captures that surreal dreamy logic of the original, not simply by including so many bits of dialogue and action, but also by the entire cast committing to each moment as it happened--even when frankly nothing makes much sense. Which, let us face it, is most of the time. Why for example such a strong reaction to the guinea pigs? I've zero idea. Her Majesty just doesn't like them, I guess. Nor is it all nonsense so much as fractured logic, a distorted world the kind we see in dreams. Of course every one starts singing a passionate song about soup! I mean--of course! Just as it would seem the Cheshire Cat would naturally be the mastermind behind Alice becoming Wonderland's Katniss Everdeen. 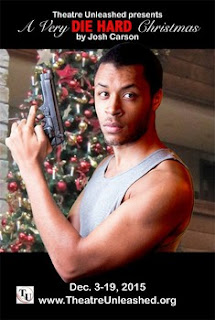 If you decide to go see Theatre Unleashed's latest production of A Very Die Hard Christmas (which for the record I think you should) then allow me to offer one vital piece of advice.

Go watch the original Die Hard movie first. I haven't seen the flick in years and for that reason ended up playing "catch up." This lovely, silly show which aims to simply bring a load of smiles and laughs takes the fact that movie was set at Christmas time then runs with it.  Yeah, it qualifies as a spoof of the flick, with all kinds of meta commentary (one character openly notes she doesn't make good decisions while another admits she probably shouldn't be working for the police department).  All well and good.  But the uber zaniness rises when they start to sew in bits from classic Christmas specials...

For example (HEY! I WARNED YOU ABOUT SPOILERS!!!!) when the Terrorists led by Hans Gruber arrive at the corporation's Christmas Party (held btw on Christmas Eve--who does that?) they line up to do a rendition of "Snow Miser" from The Year Without a Santa Claus. ("He's Hans Gruber/He's now in charge/He's supposed to be West German/But is English by and large...")

Other songs include "What's This" from A Nightmare Before Christmas and "Where Are You Christmas?" from The Grinch Who Stole Christmas.

And that really is the least of it. What with audience participation, a liberal use of confetti, taking the notion of firearms as somehow important to Christmas and (again) the whole meta thing (someone actually asks Hans Gruber "What's Hermione really like?") it is like a big funny roller coaster of laughs. Me, I loves me some angst. But also, I really enjoy this kind of over-the-top farce that just makes you giggle.

The leads are Wade Wilson as eternally gun-toting John McClane, David Foy Bauer as best-dressed terrorist Hans Gruber and Liesl Jackson as John's wife Holly who is having what one hopes is the worst hair day of her life. All three show talent and spark, but to be honest the supporting cast generally steal show--all of them playing multiple roles.  For example there is Margaret Glaccum as a pregnant office worker with very inappropriate feelsings for the tall blonde terrorists holding her at gunpoint. And Bradley Upton, Adam Meredith as well as Sean Fitzgerald pretty much making up the rest of the cast in a wild frenzy of costume and wig changes (one of them has to change character three times in a single scene, and looks increasingly frantic as he keeps switching back and forth).

A Very Die Hard Christmas plays Thursdays through Saturdays at 8pm through December 19, 2015 at the Belfry Stage 11031 Camarillo St., North Hollywood, CA 91602. Tickets are $20 and reservations can be made by calling (818) 849-4039 or emailing reservations@theatreunleashed.org

*Please note this musical parody production features loud gunshot sound effects, the use of confetti and air cannons, fake blood, profanity, violence, and jazz hands. Welcome to to the party, pal.
Posted by Zahir Blue at 6:11 AM No comments: