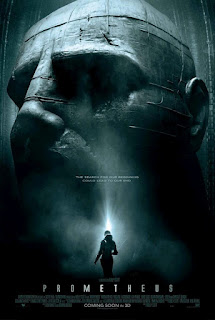 Ridley Scott of course made his name as a director with science fiction and fantasy.  This included two of the finest science fiction films ever made.  Now after thirty years he returns to do a prequel to that early landmark about the challenges awaiting humanity in outer space.

Wait.  This sounds familiar.  But no, I'll be reviewing Prometheus, the (semi) sequel to Alien.  Not the horrific piles of mediocrity which emerged as the Star Wars prequels.  Different universe altogether.

Prior to seeing this film, I only viewed one trailer and then a handful of reviews complaining about how "nothing makes any sense" or (more tellingly) "it doesn't explain anything!"  That last really bothered me, because one of my favorite aspects of Scott as a filmmaker remains the way he asks questions, but leaves figuring out the answers to you.  Prometheus ended up no exception. 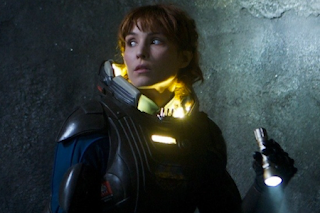 In essence this movie poses disturbing questions, forcing us to question even basic notions of what happens around us.  As a genre, it fits neatly into that of a science fiction thriller--with distinctly Lovecraftian overtones.  Much like Miskatonic University's expedition to the Antarctic in At The Mountains of Madness, the starship that gives this film its oh-so-symbolic title head out to the furthest and most inhospitable frontier humanity can reach.  In this case, a planet in a far star system.  Not, if you pay close attention, to the same world where the starship Nostromo came to grief in the first film.  Interesting, that.  Two archeologists, funded to the tune of a trillion dollars by the Weyland Corporation, uncovered evidence humanity origins somehow lie here, with an ancient race they've dubbed the Engineers. 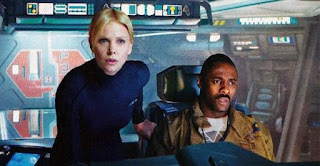 Noomi Rapace plays Shaw, with Logan Marshall-Green as Holloway, her partner.  Idris Elba is Janek, Captain of the Prometheus, with Charlize Theron as Vickers, representative of the Corporation ("I'm here to make sure you do your jobs").  Michael Fassbender plays David, an android--arguably the most fascinating in a large cast of characters.  When we meet him, he's the only person 'awake' on board.  Has been for the past two years.  Among his regular activities are watching Shaw's dreams.  What a fascinating thing for an artificial life form to do!  Indeed, his position seems crucial to the whole story.  He asks Holloway what he came looking for.  The archeologist wants to know why these aliens made the human race.  But why did we make David?  But that jumps ahead a bit.  First, the crew revives, gets a briefing and heads for the planet whose atmosphere is almost right for humankind.  Almost.  Too much CO2 (carbon dioxide) to be safe for long.  Minutes at most.  On the planet's surface they find what looks to be an artificial structure.  Not quite a pyramid.  Almost.  Most certainly hollow... 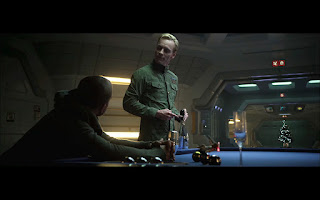 Sure enough, they've found at the very least an outpost of the fabled Engineers--who apparently look like nine-foot tall human beings with no hair and little melanin.  Yes, their DNA matches our own.  But something happened.  Something involving a kind of dark slime.  An event that left a bunch of bodies strewn around.

Perfectly enough, as all this comes to light, the ship detects a massive storm en route.  Well, yeah.  In so very many ways.

Everyone will say--accurately enough--the film looks great and keeps you on the edge of your seat.  True!  Scott knows what he's doing as a director!  But despite the thrills and chills, the violence and chases and the like which pepper the story, I maintain here we have a layered tale of mystery, of ambition and frustration as we face up to our own origins (and ourselves).  Character moments abound, yet integrate into the plot seamlessly.  Everything about the relationship between Shaw and Holloway, for example, makes perfect sense.  We rarely see someone of her type in film--a scientist who is also a person of faith.  Usually, when we do, we meet a bag of platitudes.  No so here.  She holds onto her faith even amid genuine horror, real tragedy, growing terror.  In fact, she proves herself excellent under pressure.  People like that often end up with partners with a reckless streak (and boy, does Holloway have one of those!).  That she retains her faith, making the decision she does at the end, completes the portrait of her character.  Not a lady to blink in the face of danger, is Dr. Shaw.  Nor to shirk difficult choices.

In fact, her character seems perfect for this story!  Like the audience, she fails to get the answers she most seeks.  Why did the Engineers make us?  For what reason were they (or some of them) evidently planning on wiping us out?

Those make up the essentials.  Frankly a lot of the reviews of Prometheus I've been reading come across as written by children--or folks with the patience of children.  They obsess over why a pair of terrified women seeing something huge falling from the sky seemingly right on top of them don't make better choices (here's a clue--they PANICKED).  Or whine about not understanding why David spiked Holloway's drink (because he wanted to--wanted to see what would happen).


For what it is worth, here is my own interpretation of what happened, based entirely on what we see on the screen...

The title--Prometheus, the titan who stole fire from the gods and gave it to Man, and in return suffered unbearable punishment.  Not a coincidence, so it seems to my way of thinking.  From what we see, at least two groups exist among the Engineers.  One (viewed at the very beginning) did something in the primordial Earth to make us possible.  Accomplished with self-sacrifice for some reason, they left some kind of message behind--then or later--which Shaw and Holloway later found.  Another faction, those we see in the military base, use the same substance as the first but as a kind of weapon.  Notice how the first Engineer wears cloth robes?  But those on the base seem somehow bonded to their bio-mechanical environment?  The latter evidently plan on destroying us.  Why haven't they?  Methinks that seems fairly obvious--they've misused the black liquid and it destroyed them.  Not just here, but elsewhere.  Recall this is not the planet where the Nostromo finds the abandoned vessel in Alien, later terraformed in Aliens.  That ship was some other one, that suffered a similar catastrophe.

Recall also when the black liquid came into contact with those worms it made them stronger, more aggressive?  And how it did the same to people so exposed?  What we call the Alien of this film series seems to have begun as the result of that liquid sooner or later infecting the Engineers.  Amidst this problem, genocide against the human race took a back seat.

One wonders if the Engineers even survived, and if so, as what?

Peter Weyland, ambitious and single-minded, saw all of this in terms of his own survival.  Despite his grand plans and enormous energy which led him to create the corporation that continues to pop up in these stories--at heart he remains a selfish little boy.  One fascinating trope in the whole film is how David the android in effect has two parental units from which to pattern his behavior.   Weyland, who spends a trillion dollars and endangers who knows how many lives just to keep breathing--and Shaw, willing to sacrifice herself for the higher good, and in the end motivated by a desire to learn The Truth.

Just as humanity has two factions among its creators--the Engineers--it seems David sees the same in two different factions among his own builders--humanity.  Weyland and Shaw.  Both geniuses.  Each with indomitable will and vast courage.  But look at what they want!  Therein lies all the difference, all the reason for despair as well as hope

Methinks that pattern proves too pervasive to be mere coincidence.
Posted by Zahir Blue at 5:57 PM 1 comment: