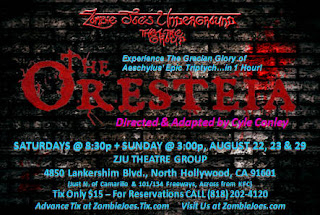 Way back when I was getting my degree in Theatre Arts at the University of West Florida, the first reading assignment in Theatre History class was The Oresteia. This marks the only complete trilogy to have survived from Ancient Greek Theatre (which traditionally told stories of their myths and legends in that format). It tells of one royal family's bloody aftermath in the wake of the Trojan War--most specifically, the fate (remember that work, it comes up a lot) of King Agamemnon and his son Orestes.

It makes for a tricky work, because Ancient Greece held a very different world view than our own--different yet in some ways familiar. For example, they were pantheists with a multitude of gods, a fact I've seen audiences find very hard to grasp. More, the Greek Gods were only partially individuals in the way we humans see ourselves. They were also forces of nature, and to violate those forces was to risk much--not because the gods were cruel or petty (although they could be) but because they literally embodied things like law, the oceans, physical love, the conscious mind, etc. Thus they tended to see what we would call "sin" in very legalistic terms, but also with said laws being part of nature itself.

What director/adaptor Cyle Conley has done here was boil the entire trilogy into an hour--and let us note up front, successfully. A tale of royal revenge, it echoes what many regard as the greatest achievement in English theatre that way, namely Shakespeare's Hamlet. Instead of focusing upon the question of whether revenge even makes any sense, The Oresteia (or "The Orestes Plays") presumes the central character deserves his revenge. Orestes' mother murdered his father the King. She did so out of revenge for his sacrificing her daughter Iphegenia to the gods in order that the Greek ships might sail to war. When he arrives back from the war, victorious, she seemingly welcomed him with open arms. In fact, she has never ever forgiven him for slaughtering their child.

Interestingly, neither of King Agamemnon's other children--Orestes and his sister Electra--mention their murdered sister. Not even once. But then, the Greeks didn't quite regard women as full human beings. Like I said, they seem terribly familiar in some way. Agamemnon brings home the Trojan Princess Cassandra as a slave and concubine.  Cassandra refused the advances of the god Apollo, after he had given her the gift of prophecy. In revenge for her refusal, he cursed her to none would believe her visions of the future. In an added cruel touch, she herself knows her words will go unheeded.  Warning Agamemnon or trying to save herself will not work. Cannot work. Such is fate.

From this brew of character and passions, a hideous irony emerges. Orestes has been wronged, his father murdered. Apollo himself (remember his treatment of Cassandra) encourages the young Prince to kill the perpetrator. But to kill one's own mother is a special kind of crime, one that summons the ancient and terrible Furies--creatures from before the Gods, who seek out their own cosmic revenge against parent murderers and traitors among others. Not all crimes, of course. Only those deemed the worst of the worst--and spilling one's own blood qualifies in their inhuman eyes, a crime for which death is far too easy a punishment...

What startles is how well this entire epic fit into a mere hour! More, the plot and characters ended up presented with rather effective modernity. A chorus is reduced to one narrator (Rosalie Alspah) who quite self-consiously steps into the shoes of a goddess for the play's climax. William Walker plays the title character, neatly avoiding the trap of emoting all those passion-driven lines and instead spoke to people as a man who simply feels that much. Jessie Brown (who, like most of the cast, played multiple roles) in particular shone, not least because all three of her characters could have been slight variations on the same theme, yet ended up each a very individual expression of unhappiness and rage. In fact the entire cast did what must be called a good job, including Sarah Metcalf as both Queen Clytemnestra as well as one of the Furies, Jordan Klomp as her lover as well as yet another Fury (he was much better in the latter) and Michael J. Marchak as both King Agamemnon as well as the powerful, relentless god Apollo.

One more performance awaits of this Oresteia, at ZJU 4850 Lankershim Blvd (just south of the NoHo sign and north of Camarillo), North Hollywood CA 91601. Tickets are $15.
Posted by Zahir Blue at 1:21 PM No comments:

Lonely At The Top (review) 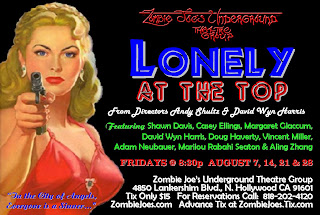 (Okay, to start with a few apologies for a delay in getting this review out. Let us say that a bout with some kind of intestinal bug, some dentist appointments, a power outage, two fumigations of my apartment building and a debilitating reaction to extreme heat are a reason, if not an excuse)

Lonely At The Top marks the second stylized farce presented in recent weeks at ZJU by Andy Shultz then co-directed by him and David Wyn Harris (who is also in the cast of this one).

Like The Bereaved, this play has a zany bunch of characters who essentially use the plot to swing onstage and dance around for our entertainment. This one, however, integrates the comedy and the story more precisely. In the 1950s, Hollywood is a land of moguls and wannabes, gumshoes and femme fatales. Amidst all these denizens walks Rex Fontana (Adam Neubaurer), famous private detective practically oozing self confidence along with liberal doses of sexism and paranoia.  The world's most famous movie director has been murdered, and Fontana is on the case!

And if you think this sounds like a souped up version of a Philip Marlowe murder mystery, you're not wrong. Just incomplete. Toss in some more tropes and truly bizarre details.  Like the rival movie director who likes to dance ballet in a tutu. Or the crime boss with a swarthy accent (trust me, somehow Harris manages to pull that off) or the amazingly over-the-top chanteuse as his club (Margaret Fitzgibbon Glaccum) who uses every single step and glance as a kind of show.

What's the result? Laughs! Really, when it comes to comedy, more than that hardly seems required. But to be sure the targets of the humor in this farce--as with the best--are not so much the specific characters and situations in the play, but our own tropes. Including our own assumptions! For example, with Fontana's constant assurances that "Dames don't commit murder" one really expects to learn the killer is indeed female. Yet when Fontana turns out to be right about his most outlandish beliefs, that undercuts out expectations quite nicely. We laugh at him, sure. But we also laugh at us. Likewise Glaccum's character is so attractive, so over-the-top alluring we fall for her a bit as well.  Again, we end up laughing at ourselves, at least by proxy.

Likewise I must praise the entire cast for the way they "sell" the absurdities of it all. Arguably this is what makes farce so genuinely difficult to pull off. It needs to be both heightened yet at least tentatively grounded, bigger than life but ultimately of life (albeit distorted, if recognizable). Shawn Davis, Casey Ellings, Doug Haverty, Vincent Miller, Marilou Rabahi Seaton and Alina Zhana pull it all off. No small feat!

Lonely At The Top has one more performance as of this writing. You can see it this Friday night at 8:30pm at Zombie Joe's Underground Theatre Group 4850 Lankershim Blvd (just south of the NoHo sign, north of Camarillo) North Hollywood CA 91601. Tickets are $15 and worth every cent.
Posted by Zahir Blue at 4:34 PM No comments: 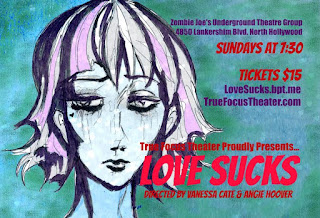