Blood Ties was a Canadian t.v. series broadcast on Lifetime. And I miss it terribly. Fortunately it is now available on DVD, and more people can appreciate this sadly-defunct show -- not only for what was magnificently right with it, but (let us be honest) what didn't work. 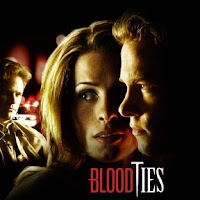 Based on the novels by Tanya Huff, Blood Ties (not be confused with a pilot of some years past involving "Carpathians") is a variation on the "Vampire Detective" trope. Other examples of the genre clearly include Forever Knight, Angel and Moonlight. A vampire seeks to redeem himself by protecting others and fighting evil. All well and good, with plenty of potential still there to mine. One hopes that the success of other vampire-related stuff will herald in another entry into the genre soon.

This series didn't do things the same old way, though. For one thing, the lead detective is not the vampire but a former police

detective named Vicky Nelson (Christina Cox). She had to quit because a degenerative eye condition coupled with her refusal to work at a desk. This, plus the fact she had an affair with her partner Mike Celluci (Dylan Neal), gives a pretty clear indication of her character -- headstrong, courageous, not too concerned with rules, etc. The two are no longer lovers but still care, their lives intertwining in all sorts of ways. 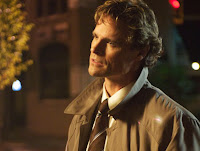 Enter Henry Fitzroy (Kyle Schmid) in the middle of a strange case involving a murder that looks like it might be the work of a vampire. It isn't, and Henry should know -- he is one and takes the real source of danger very seriously, a powerful demon seeking entry into this world. Along the way, Vicky is the involuntary recipient of tattoos on her wrists. Turns out these things act like occult magnets. The weird, the paranormal, the otherworldly are now drawn to her as if by karma. Henry, quite taken with her, offers to help out. Mike, jealous and suspicious of her newest friend, hovers.

If from the above precis, you're thinking sexual tension and emotional triangle, then kudos. Such began and remained very much at the heart of the series. All three leads did superb jobs at this relationship web, with its twists and (ongoing) turns. Between Vicky and Henry, for example, was the kind of unresolved passion Dave and Maddie on Moonlighting only aspired to. In a playful way, it harkened to Jane and Rochester, or perhaps Anne Elliot and Captain Wentworth. They liked each other, helped each other, got into arguments, and most importantly demonstrated increased loyalty to one another. Likewise the startlingly blond Mike Celluci (I figured he looked like his mom, or was adopted) never became what this character could so easily have been -- a stereotype. Instead, he continually let the conflicts of how he felt shine through in every word, each gesture, practically every single look.

The lore here sometimes proved fascinating. Vampires, for example, have to exert their will not to attack and kill each other when they get too close -- their territoriality is a major reason they are so few. "New" vampires don't instill this reaction, at least not with their creator, not until the first year or so. So a love affair between a human and vampire cannot be forever, no matter what.

In the course of the series, some episodes gave fascinating takes on the supernatural in the world

of Blood Ties. There are shapeshifters, for example, and they seek to avoid the rest of us. A secret order exists to hide away Pandora's Box, which if opened would destroy the world. An Inquisitor has managed to keep himself alive for centuries, stealing the blood of vampires whom he tortures. This is all good stuff, as was the essentially harmless Incubus who trims the lawns of various bored housewives in suburbia. Less good was when the show veered into the same sort of paranormal as Charmed. Herein lay the single biggest weakness in the show, namely an inconsistent tone.

Nowhere is this more obvious than in the character of Coreen (Gina Holden), who appears in the pilot to hire Vicky following the murder of her boyfriend (she believed a vampire responsible) and than talks her way into becoming the receptionist at Nelson Investigations. There's nothing inherently wrong with a charmingly kooky sidekick. Such has been done right many a time. Likewise making her an expert on the occult was a nice touch. But Coreen was never a well-written character. Too cute, even when supposed to be in mourning for her love, too eager to accept the supernatural without seeming to feel any worry about it. More importantly, these details never translated into a whole person. Someone once called the genius of Shakespeare's Hamlet was his "consistent inconsistency" and that is precisely the knack that was missing here. I never believed in Coreen -- just as I never once accepted the faux goth scene where she hung out as being even slightly real. Having known and hung around with goths in New York, San Francisco and Los Angeles, I can attest these were nothing but a very WASP-y person's stereotype of goths, nothing like the real thing.

Methinks this showed up time and again in the series. As a general rule, the more cartoonish the weekly threat, the weaker the series became. Instead of hints of darkness a la The X-Files we got stuff rather more akin to Bewitched. Mind you, the show could have survived that save that such darkness was a major source of the show's conflict!

Consider the other Vampire Detective shows mentioned earlier. Part of the inherent drama of those included the Vampire's guilt and the temptation of darkness within. But Henry is nothing like that. He's a womanizer, but hardly a rapist. He may have done some bad things in his long life (over four centuries) but nothing as far as we can tell like an atrocity. Compare that to the hundreds Nick slaughtered, or Angellus' murder of his entire family! His darkness is only slightly related to his being a vampire at all -- rather, it is the world to which he belongs. Mike is terrified for Vicky because he thinks she may be getting in over her head -- consorting with monsters, making herself known to demons, etc. Interestingly, Henry has precisely the same concerns. Nor are they without some merit, since Vicky does tend to be reckless.

But with that dynamic, the supernatural daren't seem silly. Ever. Coreen seems silly, sans any pathos or depth. Too many times the villains or situations in the show come across as banal -- like an insect woman assassin or even Medusa (a strangely un-atmospheric story given the subject matter).

Which serves as a lesson about how delicately the elements of a story need to be handled. My own suspicion is that if the show had not been quite so out-of-balance, more audience members might have found themselves riveted. The show might still be in production. And I for one (along with many fans) would be happier.
Posted by Zahir Blue at 10:17 AM

Nice write up, as you say the show did much right but also a lot wrong... My personal beef was the moodiness of the characters, there was just a little too much angst flying around at times.

Also the episodes were inconsistent, you'd get a fantastic episode followed by a distinctly average one... it was a shame the show wasn't allowed to find its feet.

I loved this show. I agree that some episodes were better than others, but the characters really drew me in. I liked how Henry didn't have vampire guild or angst -- he was what he was, and he wasn't sorry for it. But he did use his strengths to help Vicki solve cases. The show ended on a cliffhanger which left me wanting more, and sadly, there won't be any resolution (on the tv, anyway -- the books do take the characters in interesting directions).

Sounds like a great series...but I've never seen it. I bet maybe I could find it in a Blockbuster tho...:-)