The Visceral Theatre in Los Angeles has a double bill going on this 2012 October, one I can highly recommend! 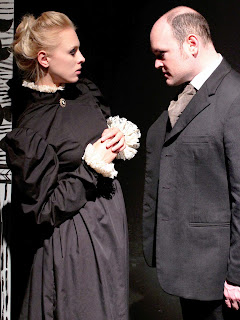 The Turn of the Screw
Henry James classic ghost story has inspired movies, t.v. shows (like Dark Shadows) and even an opera!  A production of Jeffrey Hatcher's stage adaptation runs through the rest of October-- Thursday, Friday and Saturday evenings at 8pm until October 27, 2012.  This version runs approximately 75 minutes.

A black box theatre with room to seat a two or three dozen people, the Underground Theatre at 1312 North Wilton Place in Hollywood has a basic set for this production.  It reminded me of the artwork of Edward Gorey.  Paneling, floorboards, a staircase railing, even a door and hallway beyond rendered in irregular black and white.  An equally two-dimensional gargoyle atop a wall.  Chair on one side.  Piano and stool upon the other.

Nich Kauffman has the first line.  Amelia Gotham has the second.  These two comprise the cast entire.  For those who don't know, The Turn of the Screw may be the most acclaimed ghost story in literary history--quite possibly because one cannot be sure there are any ghosts.  Or at least any supernatural ones. 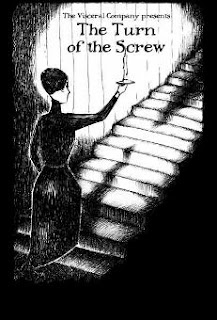 A young and inexperienced governess finds herself hired by a dashing older gentleman.  His brother and sister-in-law both died, leaving him with two children to care for.  He has no real interest in taking care of them (in and of itself there lies a mystery) but wishes a governess to watch over the children in his Essex estate called Bly (I adore how British homes so often have names).  An isolated place.  Her primary instruction--not to contact him for any reason whatsoever.  She will have total authority.   The Governess agrees.  A second mystery.  Why?  But she also inquires about any predecessors.  There was one.  She...left.

A third mystery.  They continue to mount onto the last word of the play as well as the novella upon which it is based.

Karffman plays all the roles but one, a neat tour-de-force of acting techniques as he shifts mostly between Mrs. Grose the housekeeper and Miles, the ten-year-old nephew of Bly's absent master.  Flora, his younger sister, remains mute throughout.  Gotham as the unnamed Governess begins with an overripe 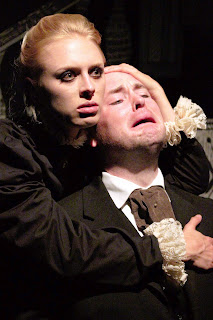 eagerness to love her child wards.  She adores the gothic mansion at the heart of Bly.  The nearby lake she calls "our little sea."  Something telling in that, and in the details we gradually learn of her life.  Beyond doubt hers is the lead, a multi-layered brew of needs and hopes and preconceptions that shapes every single action in the play.  The Narrator explains she had been his sister's governess and what follows comes from the pages of her diary.  We follow her as still more mysteries reveal themselves--increasingly having to do with her predecessor, Miss Jessel, drowned in that very "little sea" and her lover the clever but corrupt Peter Quint, also dead.  Have their wraiths returned, to seek out some new consummation?  Or is it merely the governess herself going in some sense mad?  Or--maybe--is it both?  That all three possibilities remain intact to the last moment remains to the credit of all.  But mostly to Gotham, who seamlessly shifts between aspects of Jane Eyre, Ophelia and Lady Macbeth!  Both she and Kauffman demonstrate not only powerful stage presence, but vast focus and (far more rare) the ability to convey characters at their most contradictory.  A child that goes from cynical to terrified and back again.  A young woman trembling with terror who openly wishes (sincerely) someone could be here to see her courage!

It all makes for a wonderful evening of nightmare, the kind that crawls under your skin and nestles in your heart and conscience.  Many a production of different Turns of the Screw I've seen but this easily ranks among the best. 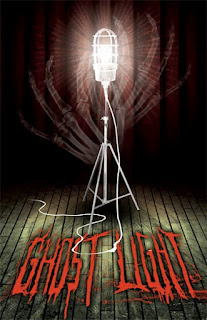 Ghost Light
At 10:30pm each night after the cerebral fugue earlier in the evening, one can also see Ghost Light, an original one act play by Visceral Company artistic director Dan Spurgeon (who directed Turn).  But is it a play per se?  I'm tempted to say not.  It feels more like a carefully scripted visit to the haunted equivalent of one of those Murder Mysteries.

Kelly (Stacy Snyder) a college student in a sorority (who bears an uncanny resemblance to Harmony on Buffy The Vampire Slayer) joins her semi-boyfriend Josh (Nick Echols) in an old theatre on a storm-filled Halloween Night.  They're meeting up with their friend Mike (Curtiss Johns), a drama major and his date Julia (Stefani Davis).

Given the tropes of the genre, I immediately Julia would be the center of the story--the quiet psych major who doesn't smoke and whom Mike clearly really, really likes while the other two barely tolerate her (in the way "beautiful people" in schools everywhere look down their noses on the quiet brainy types). 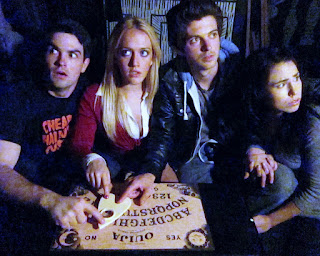 For the record, I was right.  However, she did not turn out to be the long-lost daughter or sister of the serial killer student who died on this very stage exactly 25 years ago.  What followed was really fun and frankly more interesting than my initial expectations.

Initially, I felt some disappointment.  The characters might as well be listed as tropes.  The bitchy cheerleader type.  The thoughtless jock.  The sarcastic guy with a slightly sensitive side.  The troubled quiet one who figures out what's going on.  Blah blah blah.

But as Mike tells the story of Weird Wesley, I was drawn into the night's entertainment, and by the time the Ouji board made its appearance call me hooked!  The darkness and sounds and lights made for a wonderfully spooky time and one I recommend for this most wonderful season of the year!