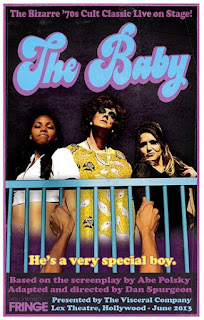 Cinema in the 1970s remains a treasure trove of exploitation classics, almost a psychological grand guignol of the silver screen. Almost. And it certainly continues to inspire those with a taste for such things, most lately in the Visceral Company's production of The Baby.

The poster calls the story "bizarre" which remains as good a word as any to describe the story. I'd never seen the cult classic movie upon which it is based. Not sure if this was a good thing or not, but I certainly had a great time!

Be warned--the whole story remains dark, perverse and maybe even haunting. And--let us be honest--absurd.

So a wonderful cast at the Visceral has a great time chewing the scenery in all sorts of styles. Frank Blocker for example does a magnificent take as Mamma Wadsworth, the matriarch of a family hopefully never found in the real world. "Dysfunctional" doesn't begin to cover it. Yet while the whole thing is done with genuine camp, Blocker and the rest of the cast manage that difficult balancing act between jokes and deadly seriousness. He doesn't mug, but finds that right tone of exaggeration that works so well with something like this--even the twitch of an eyebrow inspiring chuckles.

The Wadsworths consist of Mama, her two daughters Alba (Cloie Wyatt Taylor) and Germaine (Natasha Charles Parker)--both quite possibly psychotic--and their youngest brother, the title character Baby (Torrey Halverson). Baby is in his twenties. He wears a diaper, cannot speak or even walk, and sleeps in a crib. To all intents and purposes he remains an infant. Now social worker Ann Gentry (Jana Wimer) enters into the family, newly assigned, and nothing will ever be the same. Nothing! Cue overly dramatic music and/or cackles of laughter from some character, really almost any of them. 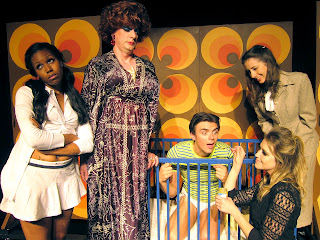 A good diabolical laugh remains a must-have for something like this. Managing it indicates a mastery of this kind of semi-retro, arch-melodramatic humor. Think Dr. Evil. Members of this cast nail it!

We follow Mrs. Gentry as she investigates this strange family and befriends the young man known only as The Baby. She suspects abuse and (SPOILERS) she is right! Well, duh!

One sign how good this production remains is that one always gets a sense people aren't telling the whole truth. Even minor characters seem to have their own agendas, a history that we never really explore but sense exists. The result--even amid all the camp an amazing sense of psychological depth remains. We get a real sense of each Wadsworth for example as an individual. Alba's sadism coupled with her fear of and loyalty to her mother. Germaine's quietly pushing the edge in the name of her own whims. Mama's bizarre (there's that word again) devotion to all three of her children. A sick, twisted devotion--but real, including the fact she herself seems to genuinely suffer amid it all.

All of which ends up very funny. If you've a taste for dark humor. Like me!

The Baby runs Sat June 22 through Saturday June 29 at 8pm, playing at The Lex Theatre, 6760 Lexington Avenue, Hollywood, 90038 (near Highland and Santa Monica).