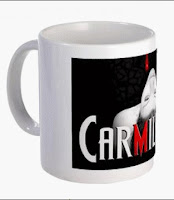 Not exactly news that I'm a hug fan of Joseph Sheridan LeFanu's Carmilla. Well, now I've written a play version and we're trying to put it up on stage!

In fact we've got rather a lot lined up. Enough to run a fundraising campaign to finish the process, complete with gifts (like this mug) for certain levels of donors.

This really is a dream come true for me, seeing LeFanu's classic as I've long believed it should be--with all the ambiguity, the drama, the sensuality and haunting as the original story!

Given we're talking about a stage play and not a novella, more a story being told in 2013 instead of 1872, some changes are of course needed. Probably the biggest change I've made is to create a character to whom Laura is telling her history. LeFanu has her talking to someone. We don't know who, not really. In my version, this is a specific person with an agenda of their own--an agenda somewhat at cross purposes with Laura, which leads to awkward questions Laura probably does not like answering. But must, given the circumstances...