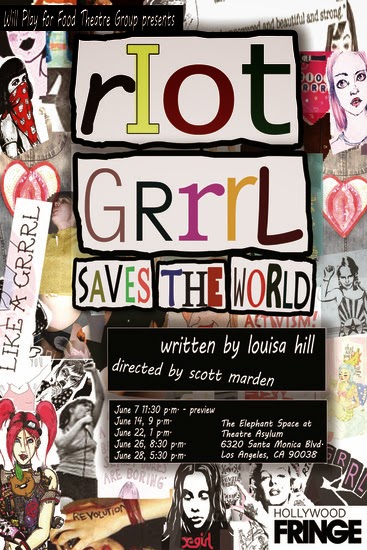 I was supposed to see Riot Grrrl Saves the World earlier in its run, but got sick. Not that the show from Will Play for Food Theatre needed any help from yours truly! They won an encore award as part of the Hollywood Fringe and are getting an extension (details not yet available).

While enjoying the play, I didn't like it as much as others clearly have. That sounds as if I'm putting it down--not at all! The play has charm, wit, sincere and energetic performances, snappy direction as well as a message that combines truth with hope amid the tears.

Yet when some spontaneously rose to their feet during the curtain calls, must admit doing so never entered my mind. My own applause was far more than mere politeness, but a standing ovation? Really?

Part of this may well be contextual. The whole Riot Grrrl Movement remains something outside my knowledge, save that it existed and seemingly still does. From the play I get the impression of a gleefully angry rebellion against sexual stereotypes most especially regarding women and a social structure that encourages same. Okay. Brava on that one. But since I'm not caught up in that idea already, methinks the production inherently is pressing buttons that remain absent inside my head.

Whether the play should take the time to place them there, even temporarily, is a personal choice. I do believe doing so would read a larger audience, maybe even helping change some minds.

Honestly, the whole play really feels unfinished, an early and extremely promising draft of something that feels like it should take at least ninety minutes to really explore. Too much of the dialogue feels generic. A lot of story points and character arcs happen too fast to follow. It would be a shame to take this subject matter and this context only to make it mundane, a "well made play" in some sense, but I feel certain these very elements can be revealed in keeping with the sensibilities of Riot Grrrls. If anything the play seems a tad too naturalistic for my taste. The title itself even begs for stuff from the Book of Revelations, from tales of the Viking Ragnarok, from pamphlets about the Rapture, etc. Or maybe just a deeper diving  into the emotional dynamics of the characters. Again, this translates into more time. Not a mere hour. Either that or a far greater focus on fewer characters (which seems a shame--I want more, not less of them)!

Essentially the play deals with a group of teenage young women and what happens about the time they form a band. It isn't about the band, not really, although it does show the positive impact the band's music has--most especially by letting someone know they aren't alone in feeling rage, frustration, a need to shriek out at a world too narrow and uninterested in those outside the mainstream. The initial three are Josslyn ( Zoë Lillian ), Steph ( Emma Servant ), and Harriet ( Tiffany Mo ). Their bare-bones meeting gets a surprise visitor, Darla ( Poonam Basu ) a Jehovah's Witness who isn't trying to convert them but just wants to talk. Needing to get stuff off her chest, she finds barely concealed tolerance from everyone save Josslyn. Given she can play bass, she even ends up in the band. In time, Darla and Josslyn fall in love. 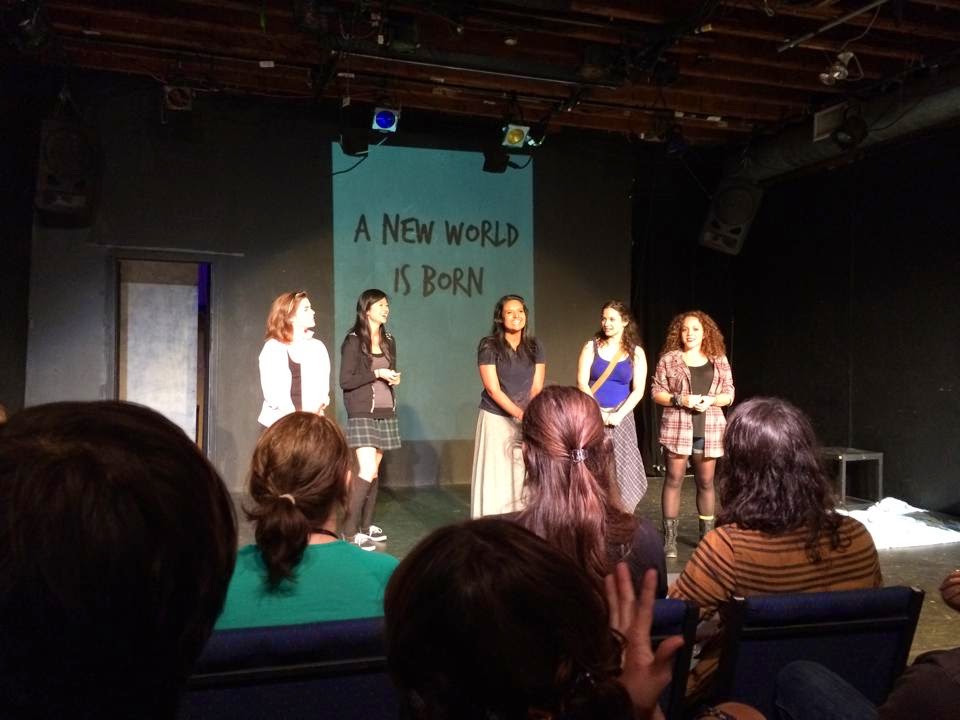 The entire cast demonstrates a consistent excellence in terms of energy, listening, commitment and (no small thing) a kind of charismatic simplicity of doing things on stage that arrest attention. Indeed, during the initial scene or so that alone kept my attention. But by the time Darla shows up, the masks of stereotypes crack and start to fall away. Josslyn's heart remains in the right place, but more by talent than hard-won wisdom. Darla has courage but cannot access it very much all alone. Steph of the pain wielded into willpower, whose arrogance taints too much of what she does. Harriet, willing to do so much for her friends and for the Revolution, but reacting in an all-too-human manner when taken for granted, thwarted, used. The whole panorama of their relationships are like the human race boiled into a tiny group of four. The author Louisa Hill said she had in mind the Four Horsemen of the Apocalypse. Honestly, I never made that connection, for better and for worse. I thought of them as the four elements, the four humours, etc. But at heart when for these characters the world does end--yet they survive--I felt for them all. Give credit to the script for that. Also for the actors and director Scott Marden.

So what am I complaining about? Because I saw something very good, and suspect it could have been great. I was moved, but maybe could have been shattered then uplifted. This whole review consists of what I call the opposite of damning with faint praise.

I seek to praise by (extremely) faint damnation.

Since Riot Grrrl Saves The World has won an extension, I urge you to check out its facebook page to learn more.