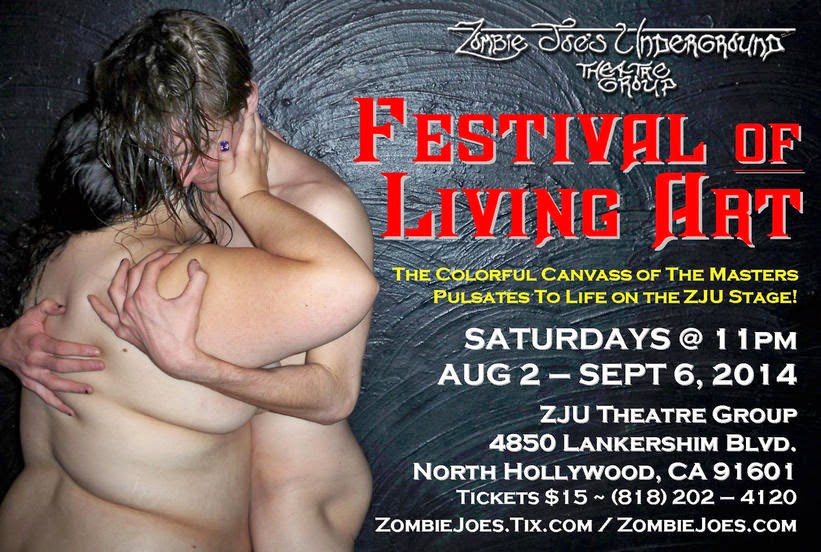 I'm a very bright person, with a good education, a degree in theatre arts--the earning of which involved among things a pretty good overview of art history. Frankly ZJU's Festival of Living Art left me feeling distinctly ignorant.

Honestly, this had to do with expectation more than anything. One would think by this time I'd know better! Look at this show postcard graphic and read the subtitle and maybe the reason might be clearer.  "The Colorful Canvas of the Masters Pulsates to Life on the ZJU Stage!" I more or less expected to recognize the works to be represented.

In fact it wasn't until the cast re-created Wyeth's Christina' World I could feel certain of an identification. Later of course I saw more and more, including Edvard Munch's The Scream (portrayed crucially and accurately as silent I'm happy to note), the famous sculpture of Eros and Psyche, Klimt's The Kiss, Picasso's Guernica, etc.

But what happened to me watching this series of still (sometimes not-so-still) lifes based on works of fine art I found myself falling into recognizing styles and periods rather than artists or specific pieces. Letting go of specific expectations was something I found myself doing as the night's show progressed. And as I did my pleasure grew. To be sure, this sort of thing isn't for everyone. But then, nothing is. To some extent, given its hour, this show does seek quite deliberately to shock and titillate at times. No more than actual Fine Art does after all, though. Consider the life and works of Henri Matisse for example (I saw two pieces possibly suggested by his work)!

So I felt myself swept along into a whole kaleidoscope of impressions, expressions, absurdities, symbols and the like. Although disorienting at time, make no mistake I was also thrilled.

I'm a bit hard pressed really to say who did what, though, so for the most part I'm forced to praise the cast in general. Not that such is a bad thing! Charlotte Bjornbak and Sarah Ceballos as well as Julian Vican and Ian Heath are new to me, and kudos to them for what the brief, fierce intensity this show demanded--often from a place of stillness. Jason Britt, Gloria Galvan, Brett Gustafson, and Chelsea Rose on the other hand I've seen before and continued to impress. Praise as well to Erin Poland and Sasha Snow plus of course the director Zombie Joe himself (who continues to experiment, continues to try new things as well as revisit/reinvent previous ideas).