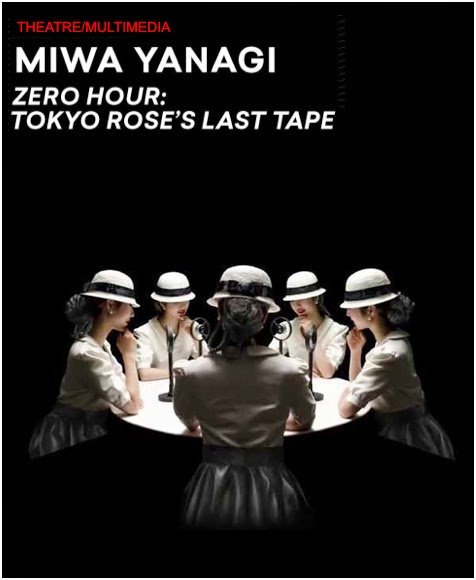 Anyone with much of any knowledge of the Pacific Theater in World War II has heard the name Tokyo Rose.  Initially this name assigned to a variety of English-speaking women who made broadcasts on behalf of the Japanese Empire. The actual case of what happened after the war is the stuff of almost mundane tragedy.  In 1949 one specific woman was convicted of nine counts of treason for making propaganda on behalf of the nation's enemies.  Later investigations indicated many witnesses were pressured to lie under oath.  President Ford issued a pardon for the real woman.

Zero Hour: Tokyo Rose's Last Tape uses this situation as a way to explore something. Names and details are changed in a manner that at times reaches the level of the surreal, especially during long multimedia/dance pieces.

This, incidentally, may be the single greatest strength and weakness of what in most ways counts as a compelling, even fascinating performance. Pacing and rhythm.  I suspect (cannot really say for sure) that were I more steeped in Japanese theatrical forms, the long multimedia sections would seem to flow with the "story" more smoothly.  As it is, I felt distracted.

But overall I also felt very interested and moved.  The play ends up focused upon four characters:  Jane Sugawa (Ami Kobayashi) an experienced announcer forced to work for the Japanese and also train various typists to announce for the program Zero Hour, Annie Oguri Moreno (Hinako Arao), a Japanese American visiting relatives when the war broke out who becomes tagged and scapegoated as THE Tokyo Rose, Daniel Yamada (Yohei Matsukado) a Nissei US soldier whose life becomes entwined with the mystery of an unidentified "sixth announcer" who made questionable broadcasts, and Toshiya Shiomi (Sogo Nishimura) the sound engineer at Zero Hour who also proves a formidable if unknown grand master of chess. 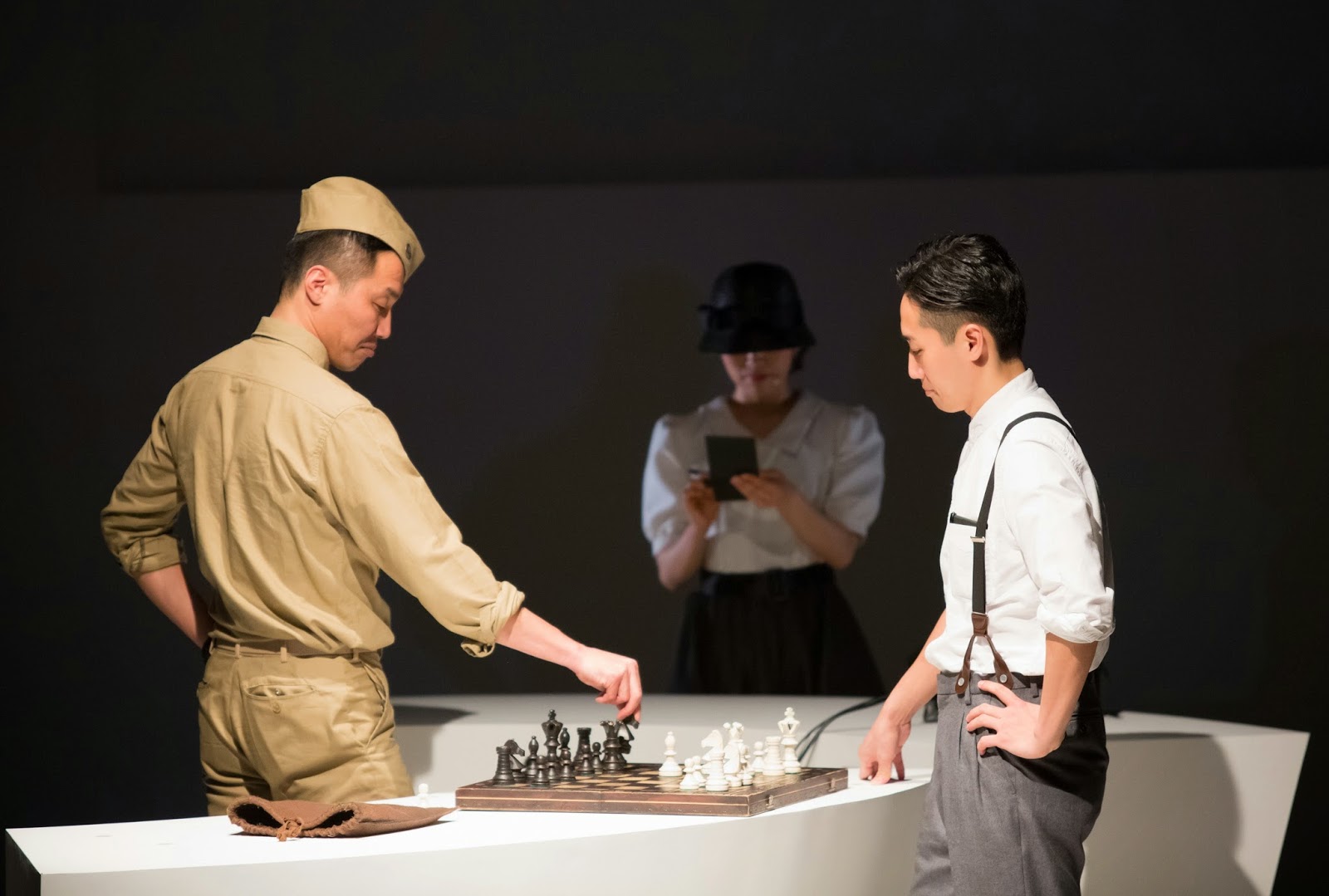 The play moves back and forth, ultimately proving not so much about the injustice of one naive young woman becoming a scapegoat, nor the guilt of two men--one who betrayed her, the other who failed to save her.  Rather it seems more than anything a rumination on obsession and identity.  We begin with seeing five young Asian women rendered all but indistinguishable, in a circle, wearing identical hats that obscure their faces.  A voiceover of G.I.s hear the voice of Tokyo Rose and speculate/gossip over this voice they hear, calling them "fellow orphans of the Pacific." Only later do the hats come off, and individual voices emerge.  Long before the climax we the audience have learned to easily distinguish between these voices, while by play's end we hear American judges insist there's no difference between these individuals, that no one can hear the variations in voice.

Even that doesn't really touch on the essence of this particular show, however.  That would be merely a comment about racism, after all.  No, Zero Hour: Tokyo Rose's Last Tape goes deeper. Much deeper, because rather than simply placing blame we're left at the end with evidence our "hero" is guilty of the same error--projecting a desire somewhere so much he cannot even conceive of the truth.  As a lovely final touch, we the audience are left in much the same situation as he.  A central mystery of events--specifically why a certain someone did what he did--remains without a solution.  Then what are we left with, but objectifying what we do not understand, imposing our own desires onto the unknown?