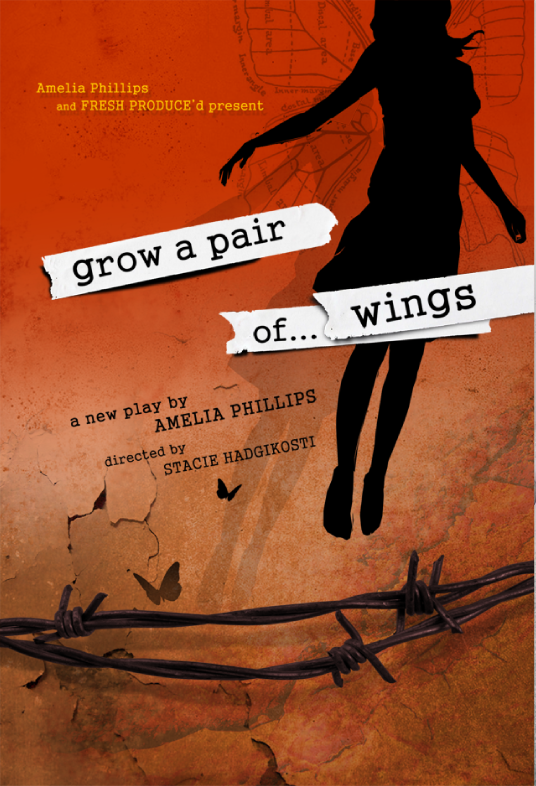 The world premiere of Amelia Phillips' grow a pair of...wings by Fresh Produce took place last week and I had the good fortune to be there. Front row, no less. Venue was a brick-lined black box with frankly better lighting and sound than I've come to expect. So kudos there!

Here's the idea behind the play.

Our playwright portrays Sarah Klein, the lead, who we meet trying desperately to host Passover for her family, especially her parents and grandfather. Her sister/roommate Aubrey (Riva Di Paola), a successful artist, wonders why she's going to all this trouble. Soon enough Sarah's gentile boyfriend (Tyler Cook) and good friend Irving (Greg Nussen) arrive as well.

All this is about ten minutes into a ninety minute play. The family and relationship dominoes begin to fall almost immediately, complete with overreactions great and small. Rather than give some kind of blow-by-blow of the plot, let me instead focus on the overall experience of this play and its impact. As the title suggests, the focus remains on Sarah, upon an existential crisis in which she finally leaves the emotional nest and learns to face the world's woes. Exactly the kind of subject matter which can be sickeningly saccharine. Thankfully, that never comes close to happening!

Director Stacie Hadgikosti did the first, most vital duty of any stage director--she cast this play well, extremely so. Really, I am so used to seeing productions with at best average performers in the supporting parts to see this--a uniformly excellent cast--was like a very special dessert at the end of a meal. In particular I want to praise how the temptations to play stereotypes never seemed to catch even one performer. No small feat, especially since a big chunk of the play's humor plays on stereotypes (while its tender heart confounds them).

Along those lines Jennie Fahn as Sarah's mother and Robert Dominick Jones as her father do wonders with what really isn't much stage time--but they give us the foundation from which to emotionally understand so much of what happens throughout! The way they blindly try their best, and sometimes fail (sometimes having barely a clue they've done so) feels utterly real--as does the strained sisterly relations between Sarah and Aubrey. Kudos to everyone, really.  Even Donna Simone Johnson in what has to be a near-thankless tiny role makes that character real. I walked away hoping to see everyone in something else one day.

But I will note a problem in the script, one of inconsistency. Here is the blurb for the play:

Imperfect perfctionist Sarah Klein was a good student, a good daughter, a good girlfriend and now, at the age of 26, she's falling flat.  Guided by the whimsically opinionated spirit of her Holocaust survivor grandfather, Sarah struggles to emerge as more than just a failed artist, smothered daughter, competitive sister, unsatisfied girlfriend, and accommodating friend.  In order to define herself, it's simple: All Sarah needs to do is grow a pair of...wings.

I hope this reads as potentially charming to others as it did to myself. Honestly, I found the play as written more complex and more moving than the blurb suggests. However--please not the underlined section. The presence of her dead grandfather sticks out like a sore thumb--not because he doesn't serve a dramatic function (he does--very much so) but his presence puzzled me. When he first appears, for example, Sarah can see him. In the very next scene, again, she can see him. After that--she certainly behaves as if he's never there until the very, very end. More, she behaves as if she never had seen him for most of the play. I don't get it.

Honestly who in an otherwise naturalistic world reacts in such a blase manner to a dead relative wandering around their apartment? At one time he wanders into the room when she's having sex and says something to her!

Now, I can well sense devoting time to this dangling plot point could easily have added another half hour onto the play. But it does end up distracting. Yet including Grandpa makes so much dramatic sense I for one hope she doesn't even consider cutting him!

Yet I hope she fixes this point. The cast and play deserve it. And even with that problem, the play moved me--not because of plot per se but because in the end I cared about all these people. No small feat!