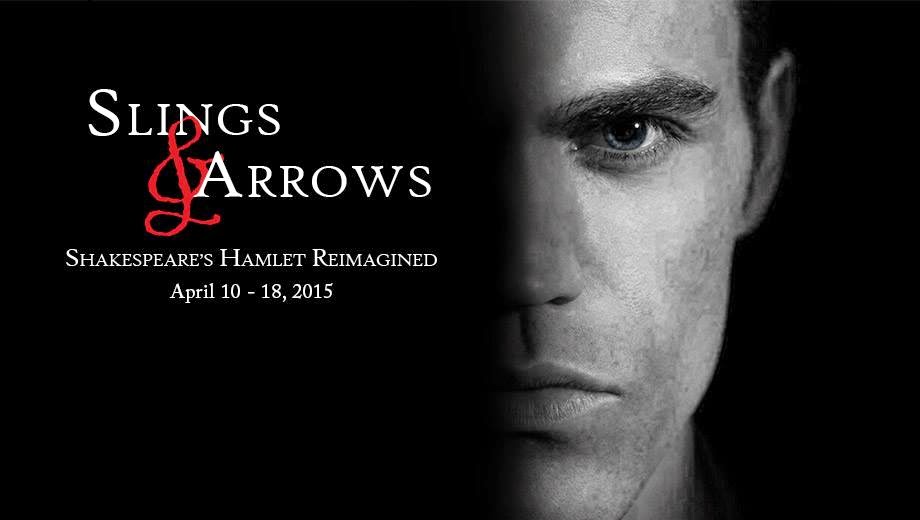 This marks my first review of a work from the Monkey Wrench Collective, an experimental theater group pretty much headed by Dave Barton, director of this re-imagination of Shakespeare's Hamlet. A commissioned work, intended to be site specific, rather like The Manor in Beverly Hills, Slings and Arrows can be seen at the Casa Romantica in San Clemente. The idea is to use the lovely seaside mansion (utterly charming and gorgeous btw) and its rooms as the settings for a carefully tailored set of reworked scenes using Shakepeare's most famous play as its foundation, inspiration and (in many ways) a seed. We the audience are encouraged to wander between a certain set of rooms, where scenes take place. We all begin and end each act together.

So let me address the production in terms of three elements.

First, this moving around. I remain convinced it could work, and in many ways it did, but on a fundamental level a lot of my energy was focused on figuring out the map included in the program. I got lost. More than once. As a result I missed a scene from Act One and rushed to see truncated scenes for Act Two. This helped me not at all when it comes to entering into this world, losing myself in the story. In fact, I got lost once. Outdoors. In the dark. I applaud the whole notion of the audience becoming voyeurs into the lives of this dysfunctional family! Really--simply adored the idea! Sometimes the impact of that worked wonderfully. But mostly the raw mechanics of it distracted me something fierce--and cumulatively.

Second is the script, the re-imagination. Overall, I was pretty impressed! I'm not one to complain about re-imagining or re-working Shakespeare, far from it! This production accomplished it at times with considerable aplomb! Cutting Horatio for example--brilliant! Especially when his important scenes are transferred to others like Rosencrantz and Guildenstern (expanding this characters proved a magnificent choice) and in one very crucial scene, Gertrude!  Really, I might have problems now and then accepting Horatio as a character in future productions! But I did get confused. The world of this play, as opposed to Hamlet, is explained in general terms by director Barton. Honestly, that isn't a good sign. I end up wondering why the play cannot speak for itself in performance? And the initial setup of this world feels jolting, out of sync. Maybe they intended it, but I never quite entered into this new reality, never quite understood it on an intuitive level. Many of the details were lovely or intriguing--the Mexican painted skull for Yorik, the paper cranes of Hamlet's love letters, the weirdly clownlike yet somehow mundane normalcy of Rosencranz, etc. But I was left with a fair number of problems in terms of visceral impact. Central to the conceit (we are told) is that Hamlet suffers from schizophrenia, to the point of hallucinations (these two are the skull-faced Shadow Hamlets, who take the place of the ghost and with whom he shares so many monologues--while they themselves take Hamlet's place in many scenes). But--everyone seems at most mildly surprised at Hamlet's obvious and severe mental illness. How is that possible, no one noticed until now? Who are the Shadow Hamlets, anyway? Archetypes of his unconscious somehow broken free? Demons? Echoes of his future actions? I don't know. They're intriguing, but I don't understand them--or a lot of other things in this world.

Which brings me to element three. The performances. Like the rest of this production, a seriously mixed bag.  Rather strangely, I thought in many ways the weakest performance came from Hamlet himself! He seemed to be doing an imitation of what a good Hamlet should be rather than a real character (most of the time--in fact he, like everyone, had some very fine moments indeed). Polonius and Laertes, as usual, remain cyphers although the performers at least brought an intensity that felt real and were more than cardboard cutouts (the fate of both characters in most Hamlets I've seen). Ophelia at least had a great scene with one of the Shadow Hamlets while Rosencranz had another great scene with the other Shadow. Those two were by far the best scenes in the whole performance.

I'm glad I saw this, not least because of the genuine quality that dazzled in spots, amid what frankly ended up feeling pretty murky. Lots of productions rarely even achieve that!