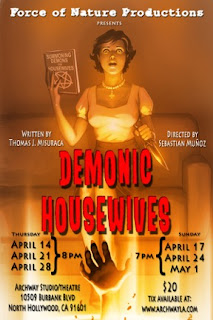 As I write this Demonic Housewives has only three performances to go, barring a revival (which I would not dismiss out of hand).  Should you go see it?

Well, it depends on your taste.  Do you have a somewhat dark sense of humor?  Does a story of a small town secretly ruled by a cabal of satanist housewives sound like fun to  you?  What about a pair of goth girls trying to destroy an evil talisman?  Did you enjoy the t.v. show Monsters? Tales from the Dark Side? How about Tales from the Crypt?

Because that is the kind of show this is.  Silly, fun, oddly touching in a way, not taking itself too seriously.  It all takes place in the town of Hobsville ("Hob" is an ancient name for the devil), where Wanda (Lee Quarrie) tries to work some dangerous ritual magic and ends up a pile of ashes for her trouble.

Hey, I did warn  you about spoilers!  I did!

We soon meet the rest of cast, staring with a trio of gossips named Lucille (Anne Westcott), Ethel (Aubry Manning) and Bertha (Suzie Heaton). In a way, the whole play is about three sets of three, each a center of some kind of power.

The satanic coven consists of the local preacher's wife Millicent (Redetha Deason), her dim friend Peggy (Beth Fisher) and new recruit--naive, unemployed teacher Kim (Monet Hendricks).  This latter has no idea what she's gotten into, nor how ruthless Millicent can be.

Finally there's an ersatz trio, of Wanda niece Darcy (Lara Fisher), the only member of the family who comes to settle the late occultist's things, with her in-your-face best friend RAE (Caitlin McCormick).  Later these two are joined by the ghost of Wanda, in efforts to somehow destroy a magic talisman that could release a horde of demons held captive.  Opposing them are Millicent's coven, who seek to help the demons escape!

Amid all of this hilarity--and it is hilarity, taken with just about as much seriousness as the Ghostbusters--the show has a violinist (Elif Savas) and cellist (Jennifer Novak Chun) offering musical accompaniment to events.  Don't know if that was in Thomas J. Misuraca's script or emerged from director Sebastian Munoz' mind, but it works!

Now, as you've hopefully gathered from this review Demonic Housewives is an entertaining comedy poking fun at religion and some of the tropes of the horror genre, well-acted and generally performed with a lot of energy.  Well and good, because it is all that.  Let me add however it is also an intensely clever work, in many ways. For one thing, how refreshing to see a play on this subject entirely about women!  Consider the works of H.P.Lovecraft, Edgar Allan Poe, Robert Bloch and Richard Matheson when you ask why that might be refreshing. Second, there's an underlying wit to the the whole story--the intersecting triads of power for example, which is too pervasive to be anything but deliberate, and also the clever way the play's ending remains deliciously, ominously "open."  Tribute to the fact the best comedies are more than a string of punchlines strung together into something resembling a plot.  Here, the plot and characters themselves are part of the humor, not least because one can easily see this same story told "straight" as a horror movie (probably on Lifetime).

A fine inaugural show for Force of Nature Productions--a wonderfully crafted blend of humor and horror, written cleverly and performed with comedic skill.

Thank you so much Mr. Blue! What a wonderful review! :)