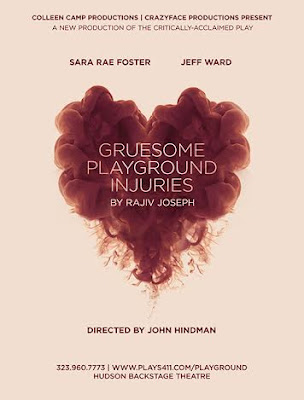 As readers of this blog may have gathered, many are the actual theatrical productions in which I've taken part.  Actor, director, playwright, stage manager, costume designer, sound/lights operator, usher, etc.  I mention this not to toot my own horn (well, not only that...) but as a segue to a problem with the script of the Gruesome Playground Injuries by Rajiv Joseph.  Technical, not artistic.

Let me make this excessively clear -- I mention this  as a means of praising the production.  You'll understand in a moment.

Essentially, the play deals with two people -- Kayleen (Sara Rae Foster) and Doug (Jeff Ward).  They meet as children (in a playground) and we see the course of their relationship over the next three decades.  Herein lies the first technical problem.  Given everyone has to make costume and makeup changes between each scene, the action most likely would simply stop between scenes.  Frankly such a problem plagues a lot of otherwise very good shows.

But -- the action didn't stop!  We never 'left' the emotional lives of Kayleen and Doug.  Partially this lies in the playwright's lovely choice of not strictly sticking to linear time.  Yeah, the first scene chronologically comes first and the very last scene does happen last, but other wise we jump around with them.  That helps make it feel more real, because it feels like memories.

Technically the production helped out by filling the moments in between.  Designers (Dustin Reno, Chris Moscatiello, J.R. Brude, Leigh Allen and A. Jeffery Sheonberg) gave us a simple set, easily shifted to lots of different locations.  More, projections on screens of images (with music) invoked a sense of time's passage, without actually becoming referential at all.  No small trick!  Initially I found myself thinking the pictures and footage shared should have had more to do with the plot, but that reaction soon evaporated totally.  I sank into the feel, the ebb and flow given.  Plus the actors never left stage!  They simply stepped upstage into the less-lit areas and changed clothes, maintaining an emotional connection, carrying we the viewers to the next scene!

And the result!  Gruesome Playground Injuries frankly is a subtle work, almost a dramatic poem about these two people who find each other.  Help each other.  Love each other, perhaps in a romantic way but always as deep devoted friends.  Never having to start up the action once more allowed the cast (and director John Hindman) to keep the delicacy of it.

Kayleen and Doug, as the title suggests, suffer injuries.  Most of Doug's are on his body, one way or another.  Most of Kayleen's end up on her soul.  Mostly.  For both of them.  At times it seems creepy, or tragic.  Other times the whole thing seems funny ("Struck by LIGHTNING?").  But from the very most basic start, when the two are just children at Catholic School, we sense the connection. We may not understand it.  They almost certainly do not.  But these two actors show it, breathe it, live it for those ninety minutes.  Childhood to middle age.  Optimism to despair and back again. Fearlessness and desperate endurance, rage and gratitude, denial as well as terrified truth-telling.  It hurt to watch.  And felt wonderful.  More, I at least could not look away.