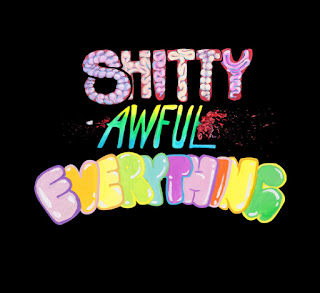 My friend Robert Walters, who plays the lead, invited me to see his show Shitty Awful Everything by Kevin Swanstrom at the Hollywood Fringe. Here's how the press release reads:

Unlike some, this one pretty much captures the show as it is. A modern version of Candide, kinda/sorta, in which everything possible just falls on top of the life of our hero Mike.

Now, let us be crystal clear.  That "dark" in the description, as in "dark comedy" is very very DARK. And very very FUNNY!  The scene where the Doctor gives Mike the diagnosis alone made me laugh out loud.  My fave moment (in that scene) was when Mike asked how long he had and the Doctor looked at the chart and answered "No."

Good stuff!  No, I'm not going to give some kind long synopsis with highlights of the best gags.  I'll simply note that instead of seemingly already having an answer (as Candide did) Mike hadn't a clue.  The calamities he endures one after another with (usually) hilarious effect don't break down and disprove his world view.  Rather than give him focus to find one.  Along the way let me say the whole cast did a fine job--including Michael Sasso, Katie Scarlett, Paul Leschofs,  Chris Voss, Sam Weiner, Juliet Deem, Kimmy Shields, and Emma Laughlin--each playing a wide variety of ages, genders, professions, mental problems, etc. 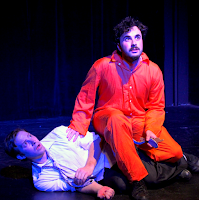 But what makes this particular comedy most moving (and tolerable given the subject matter) is that it never tells you what answer Mike should find.  We are given an experience--a very funny one, brimming over with terror and death and humiliation--then left to figure out what it means for ourselves.   Some might call it a cheap trick.  I don't agree, not least because Mike's Job-esque odyssey doesn't actually measure up to some real life horrors.  He never ends up in a Nazi Concentration Camp with his loved ones for example, nor does he see his beloved homeland destroyed, his children murdered, etc.  Rather he gets talked into trying to work in the world gay cowboy porn, only to eventually get mauled by a bear.  His horrors are just slightly more realistic than a Bugs Bunny cartoon.  Deliberately so!

And in the end, when I was finished laughed, I thought a little.  And felt a little.  Which is more than many plays deliver.  So--bravo!