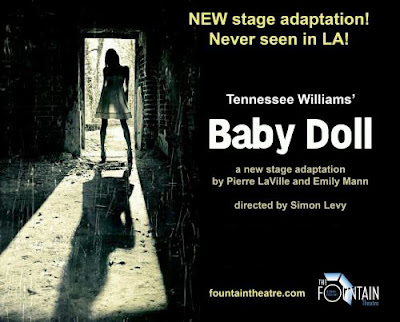 The late, great Tennessee Williams became enamored of characters, of clusters of imaginary people who fascinated and obsessed him.  Hence his return over and again to certain stories.  Baby Doll tells of one such group, two men and one very young woman about whom he wrote several times.  Eventually this became the more-or-less basis of the (very controversial) film Baby Doll.

Now, with the permission of the Williams estate, Pierre LaVille and Emily Mann had adapted that screenplay into a stageplay, currently playing at the Fountain.

The biggest factor in enjoying this play remains whether the audience finds these people interesting.  Or not.

Our title character (Lindsay LaVanchy) is the almost wife of Archie Lee Meighan (John Prosky).   Note the word "almost."  It forms an important factor in this whole story, not so much in terms of plot but the reasons for the plot's exact shape and feel.  The Meighans have yet to consummate their marriage.  As we learn very early on, Archie Lee made a promise to Baby Doll's father to provide for her and not force the teenager into more than she was prepared for--although Baby Doll herself also made a promise. She said on her twentieth birthday she would give herself to Archie Lee if he provided for her.

He has not.  Soon is her twentieth birthday, and Archie Lee is struggling.  All (well, almost all) of his furniture soon ends up repossessed. The reason--a new, more modern cotton gin that has taken all Archie Lee's business.  One night, he goes off and comes back after the rival gin has burned to the ground.  He demands Baby Doll lie, to swear if anyone asks that he was in bed all night.

The real tension now starts to climb as the owner of that rival gin, Silva Vaccarro (Daniel Bess) shows up the next day with truckloads of work for Archie.  Left alone with Baby Doll, two questions immediately begin to simmer.  Will Baby Doll remember to lie, when she isn't that bright and is almost painfully honest?  And will she succumb to the genuine attraction she feels for the younger, more handsome and far more charming Silva?

Here also we start to see differences from the famous film.  Important ones.  For example, instead of a vaguely sleezy businessman as in the movie, this Silva comes across as a genuine Lothario--someone who feels frankly a far better match for the girl.  More, while ruthless in his way--tricking/threatening her into signing an affidavit for example--he doesn't seem particularly cruel.  Or even dishonorable.  Maybe this shows up mostly in his treatment of Aunt Rose Comfort (Karen Kondazian), Baby Doll's senile aunt who lives at the decaying mansion with her and Archie Lee.  She's one of those vague, sweet, irritating and childlike females one finds in many a southern story.  Archie Lee can barely stand her.  Silva, he treats her kindly, even gallantly.

Of course, what we don't find out for certain is whether than gallantry has been more than tactics.  The ambiguity inherent in the entire situation forms part of what makes the play work. Baby Doll has been infantalized, in part by herself, but that must end soon, one way or another.  Archie Lee, a despicable man in many ways, nevertheless seems a nicer man at least than he might be.  And oddly guileless, even gullible at times.

Hence, we end up feeling for him.  For all these characters, or at least I did in ways the cast of the film never sparked.  LaVanchy never comes across as a scheming vixen, even unconsciously.  Rather she seems to grow up into a rather brave young lady by the final line of the play (which is hers).  Bess's Silva made me believe he might lack much malice at all, despite some justified rage--or he might have a startlingly sophisticated taste in cruelty.  Maybe.  Prosky's Archie Lee likewise seems more than a trope of a violent hick.

Which makes the ending feel real, even though some might say it pulls its dramatic punch.  I do not say that.  Because Baby Doll and these characters don't seem to me the stuff of tragedy, or at least not of a Tragedy in theatrical terms.  Instead it seems a drama--an exploration of the interplay between these people within their world.  More, that world feels vividly real and detailed!  Even though (or, more likely, because) the set by Jeffrey McLaughlin looks more like an expressionist sculpture than a literal depiction of that house and its garbage-strewn yard.

Although a relatively minor work compared to masterpieces like The Glass Menagerie or Summer and Smoke, this adaptation of Tennessee Williams nicely demonstrates his status as one of America's great playwrights. Yet even great plays need good performers and designers, which this production enjoys.