One of Us (review) 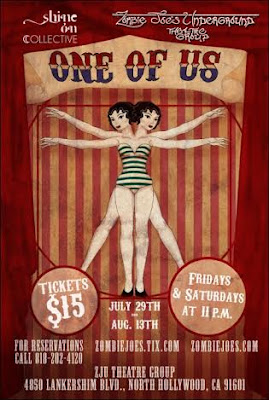 Here's a fun aspect of writing theatre reviews--finding a new playwright to follow with interest. In this case said playwright, named Anna Mavromati, wrote One of Us currently running at ZJU in North Hollywood.

As you might gather from the poster (and, frankly, the title if you've ever seen Tod Brownings' most notorious film) the play concerns and takes place within a freak show. More, the whole production pretends the audience quite literally arrived to view this freak show rather than a play.  Quite neat, really.  As the house opened, a Barker (Ian Stanley) urged audience members to step right up and view the bizarre aberrations waiting within...

While we waited, a Psychic (Trish De Luca) ambled through the crowd, offering palm readings as well.

For the next hour (almost) the Freak Show proceeded, with dissension and even fear flittering through the ranks of the performers.  From the Reptile Man (Aaron Rivera-Davis) we even get a bit of backstory about the show itself--how the former manager abandoned them, forcing them to carry on by themselves under the barely-respected leadership of the Strong Man.  Along the way we meet the Wooly Mammoth (Matt Vorce)--clearly intended as an iteration of those individuals with hair growing everywhere--along with a Human Skeleton (Raphael Dirani), an Albino Magician (Taylor Thorne), Alice the Contortionist (Megan Greenspan), and of course Chrissie (Jenny Nwene), the speaking half of a pair of siamese twins--who, disturbingly, were not born that way.

Think about that last one for a second or two.  And shudder.

Freak Shows make up their little subgenre of horror, echoed in film and t.v. and (mostly) in comic books. Clearly the playwright knows this, uses the tropes of same with a series of neat twists.  She's admirably set up this particular performance as one where things go wrong, not least because everyone feels on edge, given to revealing more than a little of the truth.  Certainly more than an audience of a real freak show would (probably) want to hear.  One performer feels unable to go on.  Another is brand new and fairly awkward.  Still another simmers with rage against the Barker and against the audience.  It all comes to a head due to a rude audience member (John Patrick D'Arcy) who heckles the freaks as they perform.

In short, this is a good play.  Especially for a second work (I got a chance to talk with the playwright afterwards)!

Unfortunately, this production is clearly under-rehearsed. The actors all show genuine talent, giving us glimpses of real humanity and emotion and even character arcs through the course of the show.  No small thing!  I've seen plenty of productions with many cast members never achieving that much!

But One of Us really needs to create its own world, the sense one has stepped into someplace Other.  Such pretty much requires more rehearsal time than this cast had available.  On the flip side, each performance with a live audience is likely to improve the show a great deal for much the same reason.  An audience makes a difference, as those who've done a lot of theatre can attest.  I saw this opening night (which is nearly always the least accomplished of any performance in the run) and I feel certain the cast will respond to having an audience.  Some might feel that an odd prediction, but I've seen it happen.  And--as noted above--this is a talented cast who are already achieving a lot.

So I recommend this, despite some problems with pacing and roughness around the edges.  Not least because of the genuine talent on stage and the interesting script they perform.