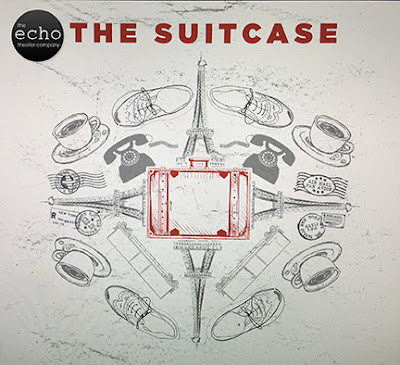 In some ways I live a truly wonderful life.  Mostly because I get to see a lot of theatre and much of that from a group of fantastic theatre companies, who produce shows that genuinely nurture the soul.  My soul.

Like The Suitcase by Malgorzata Sikorska-Miszczuk.  No really, this takes the stuff of tragedy--on a scale both vast and intimate--and through the alchemy of art makes beauty in the shape of truth and joy.

Franswa Jackloh (Vincent Castellanos) is a retired gentleman in Paris, who at the insistence of his wife goes out one day.  They are officially separated but he cares still.  She insists and he goes, in part because she has seen he is looking for something, some fundamental truth.  Franswa doesn't know he is looking, but he is.

We know this because The Narrator (Jeff Alan-Lee) tells us.  He knows because he called the man's answering machine and voice on that machine told him.  In fact, that voice emerges from the phone line to find out who this Narrator might be.  Hence we meet Jackleen (Claire Kaplan), our second but named narrator.

Up front let me say that the two Narrators have their own love story going on, linked the tale of Franswa, makes one of many reasons I loved this play.

But back to Franswa--whom you may note is French but whose name is spelt phonetically.  Just a tiny detail.  But fun.  Now he tells us many things about himself but two stand out, two events.  First, his mother refuses to tell him anything about his birth father, who died when Franswa was a baby, never seeing the child.  And let us make this clear--she's told him nothing but the man's name:  Pantofelnik.  Second, years ago Franswa and his wife visited a city with what he called a "magic wall" where--locals said--you could leave a note in its cracks to be delivered to Heaven.

Against his better judgment, Franswa had written such a letter, rambling about his own lack of belief and intense but submerged desire to know his father, not merely the (good) man who married his mother and raised him. That note took the form of a fierce plea for a sign.  Of course, he says, nothing came of it.

So one day while his wife was having surgery, Franswa wandered into a museum, a Holocaust Museum in Paris, to meet with a frantic young lady, The Miserable Tour Guide at the Holocaust Museum (Alexandra Freeman) who has had it with this place!  She's depressed, and nervous, and this is her last day because she cannot take it any more!  The hundreds of photos, the unclaimed toys, the vast hill of empty shoes...!  She pulls herself together enough to answer Franswa's questions.  She even points out a suitcase.

A suitcase.  One of three, she says, to have somehow survived the travel from France to Auchwitiz Concentration Camp and then returned now to Paris.  No one knows whose it was.  There is a name, written in what seems to be a feminine hand, evidently on a card.  So they know the name of the man whose suitcase this was, but nothing more.  Save that of course he was a victim of the Holocaust.  Murdered, long decades ago.

The name?  You already know.  I did.  Still, when it was spoken out load, I felt it like a lightning bolt--just like Franswa.

Pantofelnik.  Franswa has found his father.

I don't want to reveal too much more.  I want you to buy a ticket and see for yourself.  But as you can imagine Franswa has problems dealing with this.  He even seeks out a Poet (Sigute Miller), well runs into her actually.  Later, he returns to find The Miserable Tour Guide no longer miserable!  Someone came to claim the suitcase, after all!  She imagines one day, perhaps, in the fullness of time, someone may yet claim all the items there--all the toys, all the shoes.  Maybe.  That such a minor character has such an arch helps make The Suitcase a little more special--no small feat.  I can tell you the memory of Pantofelnik (Eric Keitel) does in the end make an appearance.

Meanwhile the Narrators watch, and their lives are changed.  As are ours, the audience.  As yours can be.