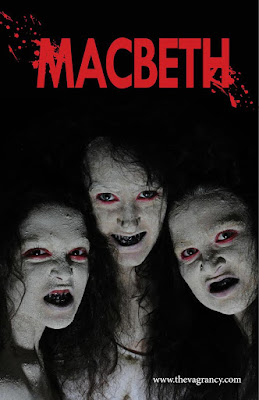 One of the Shakespeare's most popular (and difficult) plays, Macbeth is also a natural for the Halloween season.  In this case the Vagrancy mounts the strange, strange tale (and yes, the more one looks at it, the stranger this play seems).  As the poster suggests, it vastly expands the role and presence of the "Weird Sisters" -- interestingly, this involves cutting all but their most essential lines.  But the Three (Kelly Perez, Marissa Dorrego Brennan, Carolyn Deskin) relentlessly wander in and around the plot.  Distorted of limb, with gaping mouths and staring eyes, they act as a silent Greek Chorus, commenting in almost-dance about every thing happening.

The danger with doing this lies in neglecting the title character, but director Caitlin Hart does an extremely fine job in what remains one of the most vital but subtle jobs of doing many a play--balance.  None of the plots nor any of the characters end up short-changed.

Macbeth (Daniel Kaemon) and his bride (Alana Dietze) with their increasingly tangled relationship lies at the heart of the tragedy here.  Again, the production avoids a common problem with doing Shakespeare's tragedies--in this, we actually feel the tragedy for the central characters, the tragic Hero (in this case,  heroes since Lady Macbeth most certainly counts).   We have a sense of what Might-Have-Been, namely if they had not fallen prey to temptation.  More, their performances firmly portray the couple as young, vital, not yet mellowed by age, and crucially not only impatient but still hopeful for children.  This last proves essential, else the threat of Banquo's (Arthur Keng) prophecy makes little sense.

Perhaps most poignantly, part of the tragedy we feel is the permanent, growing rift between a husband and wife who seem happy at first, well-matched and genuinely in love.  Until a momentous SIN isolates them from each other and even themselves.

The entire ensemble, from Queen Duncan (Ann Colby Stocking) to the famous Porter (Steve Madar), Macduff (Joseph D. Valdez) his Lady (Elitia Daniels) and child (Aliyah Conley) and Prince Malcolm (Brandon Ruiter) each get an opportunity to shine and all them give it their all.  Even the seemingly tiny role of Fleance (Andrew Grigorian) gives quite an important turn in the end.

But I also want to talk about the design--set (Tristan Jeffers), costumes (Kaitlyn Kaufman), with lighting and sound (Matt Richter).  Because these elements did something mighty impressive, namely creating an extremely specific sense of time and place.  It isn't immediately obvious, but throughout it was vivid and consistent.  I myself imagined this was a Scotland in which the First World War continued decade after decade, so that a generation or so later people lived in the remnants of what was left.  I imagined the poisons from gas and other weapons had seeped into the soil, at least tainting and twisting nature spirits which should have been Fae or Dryads into the warped creatures who give Macbeth and Banquo their prophecies--in revenge.

Altogether a tour-de-force of creepiness, that accomplishes another difficult trick--making a very well known play feel fresh.  Kudos to the rest of the cast as well--My-Ishia Cason-Brown, Kamar Elliot, Austin Iredale, Blaine Nicholls, Andrew Walke, Ciera Jo Thompson, Rebecca Everhart, Maia Kasin and Meredith Brown.  All too often, given the size of Shakespeare's casts, one has to overlook weak players.  In the Vagrancy's Macbeth I did not, and that counts as among the least of their accomplishments.