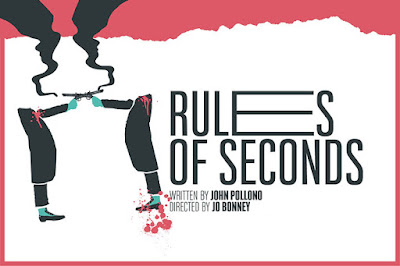 LATC downtown pretty much guarantees a good show, or so it seems to me.  When they eventually fail to deliver such no doubt I'll be shocked.  Rules of Seconds however does not shock--not in that way.  It does, however, surprise over and over again.  It also entertains.

At least on the surface, the story (and title) derive from the practice and regulations of dueling in 1855 Boston.  Such was of course illegal by this time.  Very much illegal.  But the popularity of finding excuses for people to feel insulted and demand blood in recompense remained and remains.  In fact, this play seems to me the first play this year (that I've seen anyway) addressing the issues of last November's election.

The plot focuses on a woman (Amy Brenneman) and her two sons, one fragile and clearly suffering from what we could call OCD (Matthew Elkins), the other far stronger as well as more clever (Josh Helman).  Wandering--or stealthily entering--their lives is a businessman (Jamie Harris) with a gift of the gab.  He also quite likes dueling.  Regards it as the epitome of honor, proof he is a gentleman.  In fact he simply likes killing people.  He likes it a lot.

Naturally, it is the weaker of the two sons he targets.  From that moment on, a spiral of secrets revealed, difficult choices made, cruelties practiced and hopes sometimes nurtured, sometimes stomped underfoot proceed.  It makes for what might have been quite a nice melodrama back in the day.  Perhaps with a neat message at the end, about the evils of the codo duello.

But instead, we get a pretty explicit exploration of what our age would call "toxic masculinity."  Expectation breeds acceptance of the worst, most infantile and destructive of traits.  Acceptance becomes reverence.  Reverence becomes a cycle of revenge and blood and death.  Yet to be fair, it isn't as if masculinity is the horror's only source.  Women too--as this play reveals--have the same impulses, sometimes as dark as can be and for as human reasons as men.

Not pretty.  But true.  Fortunately thoroughly laced with excitement and humor.

Overall an excellent example of a very dark comedy, both very dark and very funny.  Very disturbing too, the more one thinks on it.  The moment an almost childlike, lovely man feels a surge of desire to kill is one of many that simply emerge naturally, and haunted me.  Likewise the stories of seeming minor characters played winningly by actors such as Joshua Bitton, Feodor Chin, Leandro Cano, Ron Bottitta, Damu Malik and Jennifer Pollono turn out worthy of laughter as well as tears.  Both.  And all.

Not a great play, to be honest.  The rhythms of changing moods prove very tricky, and at least one character (and rather unusually, pretty much the ONLY one) remains a cypher rather than a person.  Honestly, the ending does prove a tiny bit too pat, although quite fun. But good, because it remains a genuine blend of the best elements in theatre, not a great blend but a good hearty one with lots to recommend it!