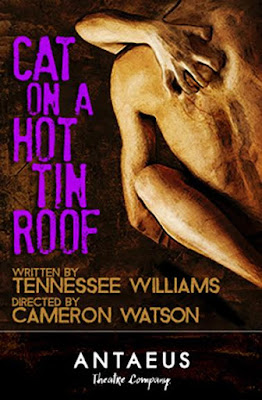 
Tennessee Williams had a tumultuous life, and watching his plays you don’t get so much a feeling for his details of a biography but a sense of the passions he observed and felt all around him.  That fact helps explain his status as a “classic” American playwright, a status richly deserved.  Hence his famous Cat on a Hot Tin Roof makes its way into the repertoire of the Antaeus Theatre Company (now moved into its purpose-made digs in Glendale).

Please note: Antaeus usually has two complete casts of each play they produce in rotating repertory.  I saw the performance by the “Hoppin’ Johns” cast.

Cat on a Hot Tin Roof , like most of Williams’ plays, fits into the same semi-genre pretty much invented by Ibsen and Chekhov over a hundred years ago—the family as a metaphor for society.  As such, it does not offer a “message” so much as diagnosis of how this group of people interact at a crisis point.  A particularly fine accomplishment here emerges in the fact I ended up sympathetic with every single member of this unnamed wealthy family, even when I felt some of them (okay, pretty much all of them sooner or later) did something just terrible.

Most assume the character we first meet, Maggie (Linda Park) , the title character.  She describes herself explicitly as a “cat on a hot tin roof” determined to stay as long as she can.  At one point she even dubs herself “Maggie the Cat.”  Of course she’s also one of the most vivid, powerful characters we meet, which says a lot! In fact she dominates Act One so much Williams needed to get her off stage for most of Acts Two and Three, lest she eclipse everyone else!  Park captures this roiling set of passions and determinations with great skill, frankly creating a Maggie I much prefer to Elizabeth Taylor’s in the movie (although that script was mutilated, to be fair).  Here we meet a Maggie routinely and with laser-like focus pursuing her goals, yet with a surprising tenderness following her like a shadow.  Her take on the character is someone quite judgmental of others, but also forgiving in many ways, who feels herself losing that latter quality, much to her dismay.  A subtle but profound choice, one informing almost every breath.

Of course, her larger than life father-in-law Big Daddy (Mike McShane) points out both Maggie and his other daughter-in-law the eternally fecund Mae (Tamara Krinsky) seem like “cats on a hot tin roof.”  Maggie’s husband Brick (Daniel Bess) agrees.  What both perhaps miss is that every single one of this family has earned that title, one way or another.

This counts as one of many insights this specific production, directed by Cameron Watson, offered.  Perhaps most obviously in the set, which (like Baby Doll at the Fountain last year) ignores any attempt at realism in favor of making the setting—Maggie and Brick’s bedroom—a metaphor for the family itself. The windows and ceiling tilt in opposite directions. One corner of the floor warps upward if from water damage, while scraps debris from forests or abandoned homes hug the set on most sides.  Big Daddy’s house is sinking, about to collapse, and no one notices. Kudos to Scenic Designer Steven C. Kemp.

Essentially we get a glimpse of this, Big Daddy’s birthday.  The ex-redneck farmhand who worked his way up to overseer of a huge plantation in the Mississippi Delta, then inherited it when the couple who owned the place died, Big Daddy has been living in terror.  He feared a recent sickness was cancer, back in the 1950s when that was nearly always a death sentence.  Now the news he only has a spastic colon makes him feel alive, more vital, and his personality comes roaring back full force.  Given a chance he puts his wife Big Momma (Julia Fletcher) down, quite brutally.  Distaste for his eldest son Gooper (Michael Kirby), Mae’s husband and the father of their children (Henry Greenspan and Eliza LeMoine) bubbles up.  But most of all he wants to know why his younger, favorite son Brick crawled into a bottle.  He wants to find out, and means to!

What he does not yet know, however, is how the doctors are lying.  Big Daddy does indeed have cancer.  His days can now be counted.  But Gooper and Mae are keeping it from him and from Big Momma until later.  Not out of kindness, not really.  After all, Big Daddy has evidently never shown them much kindness and expecting any in return frankly comes across as foolish.  No, they want to secure an inheritance worth millions.

I find it hard to judge them for that, really.  Poor Gooper has to put up with his parents both referring to Brick as Big Daddy’s “only son,” even though Brick has done nothing but play football then announce football.  Now he doesn’t even do that!  Gooper has a prominent career as a lawyer, has a family.  Truth to tell, their treatment has been shabby.  If Big Daddy or Big Momma wanted loyalty, then they should have given some.  In this production, even Maggie doesn’t seem to hate her brother- and sister-in-law.  Most of the time.  She simply fears seeing her husband disinherited, and herself ending up poor and old—a combination she rightly finds terrifying.

This kind of nuance makes for fascinating theatre, and when a cast this good brings such nuances to the surface, then plays like those of Tennessee Williams get their just due.  All through much of Acts Two and Three, literal fireworks go off in the grounds offstage.  Metaphorical ones upstage them between the characters—and the depth of what constitute those make a riveting production.

Cat on a Hot Tin Roof plays Thursdays, Fridays and Saturdays at 8pm, with matinees Saturdays and Sundays at 2pm, until May 7, 2017 at the Kiki & David Gindler Performing Arts Center, 110 East Broadway, Glendale CA 91205.
Posted by Zahir Blue at 11:33 AM