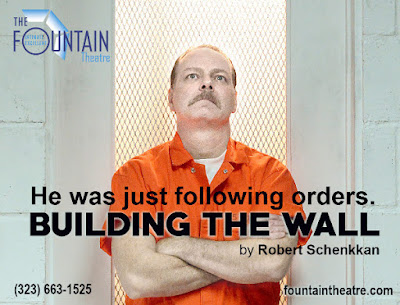 The perils of moving and getting a new job--one sometimes falls behind.  I thought this show had closed, but now has been extended, so I'm kicking myself for not getting my review out sooner.

Building the Wall by Robert Schenkkan marks one of many theatrical responses to last November.  Just from the title I knew that much going in, but nothing else.  Having not read any reviews, nor more than glance at the press release, nor even having read the program (this is SOP for me--prefer to be surprised) my expectations were minimal.  Save that the Fountain Theatre does good work.

What I saw was a meeting room in prison.  A man in the orange jumpsuit of a prisoner (Bo Foxworth) meets an African American woman who turns out to be a history professor (Judith Moreland).  They are wary of one another.  The prisoner, we soon learn, is on suicide watch--a fact he finds ironic since he expects to be executed.  The professor isn't so sure, but wonders if her race is off-putting to him.

He says no.  He's impressed by her honesty.  She wants to hear his side to what happened.

But what happened?  That we don't know and don't find out for quite some time.  Here the equal skills of playwright, actors and director Michael Michetti all come into play.  They had me going several times.  Was this man a serial killer?  Someone maybe whose frustrations erupted into violence revealing some seething prejudices he now denied or tried to justify?  No, and no.  But by the time I realized this, the story had me hooked.

As might be expected from the title alone, this play functions as a polemic.  It has a point of view, which it attempts to make you share.  These generally annoy me a bit, unless done well.  As it happens Building the Wall does it very well.  For one thing each character comes across as a blend of flaws and virtues, with competing but at least to some extent justifiable (or understandable) world views.  Nobody has all the answers, which of course doesn't mean there aren't some answers.

Most of all, what I got was a microcosm of two sides of the nation I call home--not that there are only two sides, but in terms of this past election it comes across as clear.  Yeah, the professor tends towards condescension and lacks some insight into her own blind spots.  Exactly like the prisoner.  Neither of them are stupid or unwilling to listen.  They are both decent people.  In fact, were the prisoner (who we learn did commit a truly horrendous crime) some kind of monster, a sociopath or fanatic, there would be no play here.  Nothing to make us ponder or think or re-examine.

I myself wonder at how some Conservatives I know would react.  Alas, some would certainly dismiss it as fantasy--fiction, therefore meaningless.  Or would simply refuse to even acknowledge the implications of the play, because its scenario of the next few years is actually anything but crazy.  It could happen, although one desperately hopes it does not.

But it also highlights a terror of our age.  Tyranny happens because not enough people say "No."  Sadly, this often takes a partisan turn, as if assaults on human rights were the sole domain of any one political party or group.  One of the most powerful things about this play and its production lies in how that is never the point.  It paints a horrifying picture of what the Trump administration and its supports might do--a very plausible one--but never hints there is something "other" about those who would commit the worst crimes.

It would be so much more comfortable if we could believe that.

Building the Wall plays Fridays and Saturdays at 8pm, Sundays at 2pm, as well as Mondays at 8pm through August 27, 2017 (there are dark nights, especially around July 4 so check the website) at the Fountain Theatre 5060 Fountain Avenue (near Normandie) Los Angeles CA 90029.