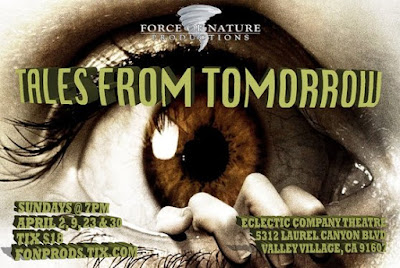 Force of Nature's Tales From Tomorrow consisted of four different short plays in a repertory.  To be honest, the length of these (very) short plays--while popular--do not lend themselves to particularly riveting characters or stories.  Hence my approaching such with a grain of salt.  At most you usually can only see something fun and clever--which in and of itself is fine!  More than fine!  As per usual, FON achieved that much pretty consistently!

""A Shot in the Dark" honestly is the least successful of the five.  Interesting idea, with good performers, but requiring...something.  Maybe a technical tour-de-force or brilliance by the actors.  A man (Jahel Corban Caldera) has bought a gift and his two best friends (Melissa Munoz and Sasha Snow) advise him for as well as against it.  One is all support and in pastel blues, while the other dons vampy bright red.  Two sides of his soul, as it were, angel and devil.  But what makes up the heart of their argument?  Well, that was not explored and perhaps for this piece some stronger hints of this need viewing.  Me, I suspect writer Kelly Copeland needs to expand this into a full one act to make it really work.  JMHO.  Directed by Chris Campbell.

"Hubris & Heroism" was almost my favorite, with two brothers (Sebastian Munos and Chris Campbell) see each other for the first time in years.  The elder brother left the family business years ago, refusing to obey their Dad in all things (Dad has since retired).  The younger has run things ever since, become overwhelmed, wants to start over leaving the original firm with the 'black sheep.'  I think we'd all figured out by the end writer Chris Campbell's twist--the brothers are Michael and Lucifer.  Munoz also directed this one.

"Home for Dinner" by Robert J. Watson has Tom Jones and Jennifer Novak Chun along with Benjamin Fuller doing the most psychological piece of the evening--all about regret for a dead son, who can speak via his cell phone (maybe) and how parents react to this impossible chance.  Directed by Andy Shultz.

Finally "Rip and Vanna Winkle" by Tom Jones again is one of those that seems to demand more time than it had.  Director Corey Chapell did well enough in this Twilight Zone-eque story, with Benjamin Fuller waking in the far future after being cryogenically frozen centuries ago.  He finds his wife, Monet Hendricks, waiting for him along with a Jennifer Novak Chun as a doctor telling him of the utopia which the world has become--a world that he views as the epitome of all his worst nightmares.

So, a fun evening's entertainment.  Mostly laughs, a little bit of real drama, some surprises and cleverness all wrapped together by a talented group of performers.

As of this writing, Tales from Tomorrow has closed but more installments in the series are in the works!