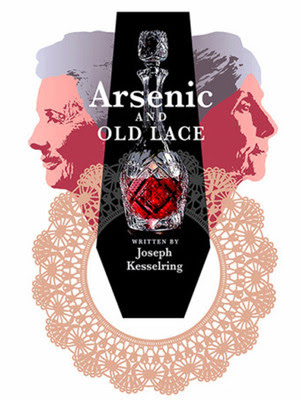 Productions of Arsenic and Old Lace face a problem.  Quite simply, this very popular play had a very successful, very funny film adaptation starring Cary Grant.  Yeah that makes for a lot of time to use the word "very."  More importantly, it creates a temptation to "copy" that film at least in terms of style (which was really quite over the top zany).

Odyssey Theatre's production thankfully tries no such thing.  Instead of orchestrating a series of ever-wilder gags in a rising crescendo of silliness, it grounds the humor in real moments between characters rather than perfectly delivered gags.  Of course the two need not be mutually exclusive, which highlights the biggest problem with the production.  It just is not as funny.

"As" funny, please note.  We the audience still laugh.  But mostly we grin and enjoy the plot and characters.  Is this a problem, though?

Essentially the play focuses on the Brewster Mansion in Brooklyn during World War II.  It stands next to a cemetery, and only recently had electric lights put in by the sweet elderly spinster sisters Abby (Sheelagh Cullen) and Martha (Jacque Lynn Colton), renowned throughout the neighborhood for their good works.  A nephew named Teddy (Alex Elliott-Funk)--who believes himself to be Teddy Roosevelt--lives with them, the kind of lunatic most folks seem willing to affectionately tolerate.  Another nephew, Mortimer (JB Waterman), is a theatre critic for a major newspaper and is dating the local minister's daughter Elaine (Liesel Kopp).

Of course we learn fairly soon the dear old sisters are in fact serial killers (although the term hadn't been coined yet).  They poison lonely old men who have no family when the latter coming looking for a room.  A mercy killing, one of their charities, you see.  Then Teddy buries the "Yellow Fever Victim" in one of the locks of the Panama Canal, i.e. the cellar.  Twelve so far.

Mortimer as one can imagine is hardly happy to discover all this.  He loves his aunts, and his brother Teddy.  But cannot allow this to continue (although honestly Z and X cannot imagine what his problem is).

All this becomes even more complicated with the long lost nephew Jonathan (Gera Hermann) returns in the middle of the night, a professional criminal and violent psychopath with his pet plastic surgeon Dr. Einstein (Ron Bottitta) in tow.  Given the set has five different exits (which are also entrances of course) it should surprise no one the complications build on complications, secrets are kept then discovered, then new secrets and situations pop up amid a growing threat of violence--all with a light touch.

The script really does stand out as a near masterpiece that way.

To do a farce like this somewhat low-key makes for a fascinating choice, skillfully done.  A simple example stands out.  Teddy spends the first scene not strutting about in a caricature of Teddy Roosevelt, but rather hovering and acting on impulse rather like a child playing make believe. He and the rest of the cast never ape their facial expressions, don't distort themselves into caricatures of human behavior.  It would be so easy to do that!  Yet by not doing it dozens and dozens of little details stand out, little bits of characterization one rarely sees in a farce--but which deepens the humor, while at the same time making the laughs quieter.  A really interesting set of choices, so consistent director Elina Santos deserves credit for it.
Arsenic and Old Lace plays Fridays and Saturdays at 8pm, Sundays at 2pm (with one Wednesday Sept, 13 and two Thursdays Sept. 28 and Oct. 5) through October 8, 2017 at the Odyssey Theatre, 2055 South Sepulveda Blvd., Los Angeles CA 90025.
Posted by Zahir Blue at 8:06 PM