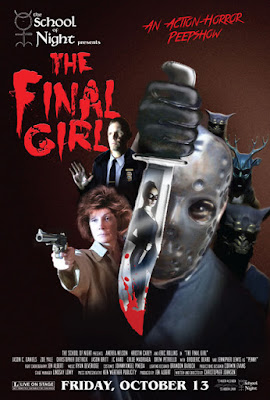 When I finish telling you about this, you might believe this stageplay should have been a movie.  For the record, if you do think this, you are wrong.  The fact is seems like it should be a movie makes an essential part of the delerious fun!

The Final Girl takes its title from a trope in all those 1980s slasher flicks.  Remember that one girl in the end trying to get away from the masked maniac with a knife or an axe or a scythe or something?

She's the hero of this show.

In fact the play is a virtual sequel to every single one of those flicks, but re-imagined not as simply another slasher film but a superhero origin story!

Victoria (Andrea Nelson) alone survived a spree killing that killed her family and friends.  Seven years later, we meet the almost frighteningly focused young woman she has become, among other things an impressive martial artist.  Her former therapist Dr. Harriet Lewis (Kristin Carey) turns out is worried about her.  She has reason, since Victoria is moonlighting as a vigilante hunting down explosive psychopaths who escape from prison or asylums to go on brand new killing sprees.

So when Wayne Walton (Eric Rollins) breaks free to return to his hometown, Victoria dons her own mask to follow.

Okay that sounds like a fun, straightforward Holloween fare, but believe me the twists come fast and furious.  The whole story has a very dark (and funny) sensibility, not least how Victoria's personal "kink" involves the masks of those psycho killers she's killed.  Plus the cliches that do backwards sommersaults in all sorts of entertaining ways.  The fight scenes prove absolutely spectacular, sometimes with the help of black-clad stage hands who move things "unseen" by the cast.  It helps also the cast proves so uniformly high quality, up to and including the seemingly innocent college kids who've gone to have a relaxing weekend in a hunting cabin miles from anywhere right after the psycho killer has escaped (Jason Britt, Zoe Yale, Juan Carlos Haro, Chloe Madriaga, Andrew Clark).

Or not so innocent.

This show is one of the most fun and original I can remember, zany and yet adult, over-the-top yet somehow real, dramatic yet hilarious.  Strongly recommended.  Really.  I mean it.