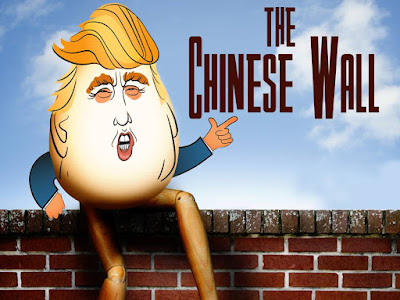 In 1946, after the vast horrors of the second World War ended with the looming threat of even greater horrors via atomic weapons, Swiss playwright Max Frisch wrote The Chinese Wall.  This work dealt with the idea that humanity can no longer afford pettiness among those in power.  Once we achieved the power to kill everyone, change became necessary.

But would change happen?  Can it happen?  Today, more than in over a decade, such questions seem more pertinent.  Today, we have world leaders who make us look back with envy at the likes of Richard Nixon and Leonid Brezhnev.  Those terrifying, ruthless old man seem more benign that who we have now.  Let us share a genuine shudder at such a thought.

Now, The Chinese Wall is remounted by the Group Rep in North Hollywood for precisely that reason.  How does it work?

Something of a mixed bag, to be honest.  For one thing, its style is dreamlike, with figures from history meeting out of sync with one another. One of the central characters is simply known as The Contemporary (Patrick Skelton), a visitor from our time trying to...I'm not sure.  Persuade figures from history to change their ways?  Try and understand them?  Such a lack of linear story need not wreck a theatrical experience.  Many wonderful such remain equally "dreamlike" with all the weird logic inherent in dreams. But to make it work, just as in any production of Alice in Wonderland, the cast and director need laser-like focus.  Sadly, only a handful of this quite large cast show such.  Fortunately those handful have pretty much the major roles, but the rest of the cast create a muddle, often a series of jokes that aren't funny.

Shoe-horning contemporary comment over and over and over again frankly helps not at all.  The plot deals with a surreal version of Chinese Emperor Tzhin Zhe Huang Ti, builder of what we call the Great Wall of China (there are actually lots of such), which in this production is almost painfully made to represent Donald Trump (Mark Atha).  The actor himself just dives into the madness with energy and vigor, so kudos to him, but some of the "gags" are awkward at best.  One, equating the First Lady with an overly licentious version of Cleopatra (gorgeous and charismatic Gina Yates) bordered on offensive, as well--more importantly--trivilizing the point by making it all so specific.

Not to say the play isn't fun at times.  It is!  More, as the play progresses the absurdity takes a shape which by the end made me care, particularly about the Emperor's daughter Mee Lan (Savannah Schoenecker) who bears zero resemblance at all to Ivanka Trump, save for being seen as an asset by a wealthy powerful father, like royal daughters and their like throughout history.  Her desire to rebel and growing relationship, however dreamlike, with the Contemporary becomes a genuine character arc.

In the end, amid a trial equal parts Lewis Carroll and 1984, the revolution finally comes, fueled by rage and broken promises, by greed and toxic masculinity, and by a failure of our heroes--Mee Lan and the Contemporary--to find a way to prevent the blood bath.  Amid ashes and ruins, they contemplate an eternal cycle it seems of lethal foolishness and casual cruelty.  In the very end, I felt something.

Which is good.  Too bad about the all the chaff in the way but I liked bits of it, and not just from a few leads.  Caroline Stella was enormous fun as Don Juan, while Nick Paonessa proved genuinely interesting as well as frightening as Wu-Tsiang.  Todd Andrew Ball did a quite good job as the kind of ur-bureacrat Da Hing Yen, while in a tiny tole Sarah Zuk as the Ingenue managed to come across as a person speaking her own words, no small thing.