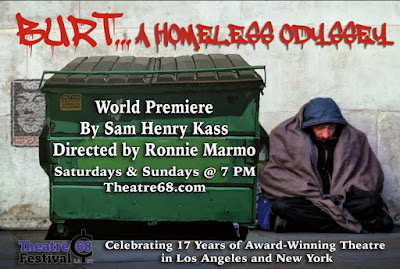 "Odyssey" refers to the Greek hero Odysseus, the most cunning of the generals involved in the Trojan War.  The epic bearing his name tells not of his seeking out adventures or fame, but rather a decade-long attempt to return from war.

Burt...A Homeless Odyssey follows this pattern, more or less.  The title characters (Ed Dyer) of the piece frankly comes across initially as repellent. He begins by abandoning his wife and children, complete with some cynical comments about whether one of them is "really" blind.  Just before leaving he asks if his wildly enraged wife (Laura Lee Botsacos) can spare a few dollars.

Over the top, one thinks.  But the show has barely begun as far as that goes.  In fact, like many interesting but often bewildering pieces of theatre, this work feels very much like a dream. In fact, taking it as a dream (of some kind) helps in understanding what we see and hear.

How else to explain people surrounding Burt killing themselves quite so eagerly?  Well, that one does become clear. Rage permeates many of these characters, rage which seems a shield against despair.  When the shield cracks, enough, the despair overwhelms.  It does for the bartender who cannot stand folk music (Jennifer Nwene), one of the cops (Thomas F. Evans, Christopher Kelly) interrogating Burt, his disheveled and ragtag defense attorney (George Russo) and others.  Along the way we meet a homeless man (Hansford Prince) who survives being shot in the head, a vaguely Arabic immigrant (Nima Jafari) who "freelances" getting rid of those he sees as un-American, a weirdly optimistic if cynical rabbi (Raffi Mauro), a startlingly violent sunglass saleswoman (Hope Bello LaRoux) as well as a rich woman (Kelly Mullis) the former blinds then tricks into drowning herself for misusing the word "amazing."

Plus Ivana and Barron Trump.

All of which seems borderline incoherent, but not quite.  Like the kilted actor (Drew Hinkley) who hasn't worked in years, eagerly looking for his big break even though he is homeless, yet proves willing to follow a weird number and variety of suggestions, the play is a roller coaster.  Imagine a psychodelic blend of Alice in Wonderland plus Waiting for Godot but set in modern New York with a few dashes of Candide by way of the Cohen brothers.

But in the end, Burt comes home.  In a way.  The weird brew coalesces into some sort of whole, not a hodge podge of weird/funny/dark images but rather a piece of abstract art.  After all the illusions get shredded, the lies hammered out of the way--and Burt's poems slowly get better--we and Burt see something else.  Something that seems real.

But he--and we--have to figure out what to do with it.