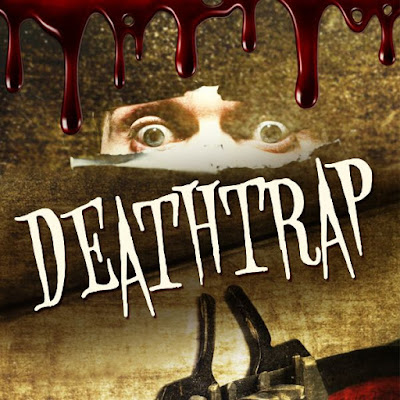 The play Deathtrap sprang from the pen of Ira Levin, who also gave us such thrillers as the deeply disturbing Veronica's Room.  Now this latter play proves not nearly so disturbing, with its diabolical cruelty on so many levels, but does seem at least as clever.

Its central premise involves a Sidney (Robert Benedict Nello), a playwright in deep need of a hit and living essentially off of his wife Myra (Gina Yates) wealth.  Clifford (TJMcNeill), a student of his at a writing seminar sends him a copy of his new thriller, his first such play, titled (and here the cleverness really starts to kick in) "Deathtrap."  Since this is in the 1970s, he has only physical copies, and hasn't had a chance to make any xerox ones.  On top of that he's house-sitting, no one knows about his efforts at playwriting and so when he accepts an invite to Sydney's home to perhaps collaborate on improving the script, he seems to be walking into a trap.  Indeed, much of the first act builds upon Myra's fear her husband might just kill this young man for the script.

Quite simply, two writers of thrillers find themselves as the protagonist and antagonist in a real life thriller.

Clever, yes.  Frankly it gets more and more clever as the story proceeds. So much of the pleasure in the play derives from that I hesitate to reveal the twists and turns which occur.

Now this marks the third show I've seen at the Group Rep, and as a production this seems to highlight what seem to be this company's strengths.  They have the resources to put on such a physically specific production.  A staple of actors awaits, competent and of the right types, in a good venue with a very nice lighting and sound system.

It also highlights some problems. First, in this production at least, the play is treated as movie for some reason--complete with a musical score during the action.  Honestly, why?  It added nothing, while yanking me away from the pertinent "realness" of live theatre--not least because it feels so weird to have background music in a realistic play (as opposed to a musical).  But since the other show's I've seen here don't have this flaw, it hardly seems typical.

More telling is that the entire cast, including Lloyd Pedersen as Sydney's lawyer and LizAnne Keigley as a local psychic who moved nearby, proceeded to perform in a businesslike way with intelligent line readings and good timing.  But that was pretty much it.  With the exception of Myra the characters rarely felt alive (although that background music certainly did them no favors) save for brief moments.  I rarely got sucked into the story, never felt particularly tense or afraid, felt little or no investment in anyone on stage.  This marks it as different at least to some extent from Another Antigone or The Chinese Wall, other Group Rep productions in which for some characters at the very least I felt for.

So the result ends up genuinely entertaining, genuinely well crafted, genuinely enjoyable.  But not compelling.  Not exciting.  I was never once bored.  Nor did I particularly care what happened to anyone on stage.