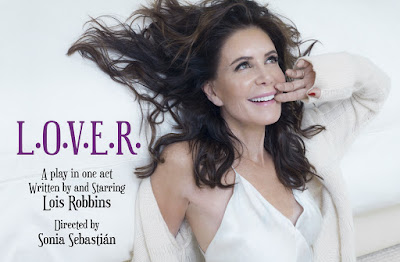 The central character of L.O.V.E.R., a one woman show written and performed by Lois Robbins, proves charming.  I liked her.  She had a story to tell, which made a lot of sense and including lots of those mundane growing moments which make up life.  Dealing with her father's over-protectiveness, the family's desire she date someone Jewish, mistakes large and small--much of it tied up with her sexuality, her learning to experience pleasure, etc.

It bears repeating I liked her.

I should also point out she's rich.  At least by my standards.  She grew up in Long Island, which she treats as somewhat shameful.  (I grew up in Florida, where high schools had to institute literacy tests and where I personally saw men in white sheets light crosses with torches).  She could afford to go back and forth from west to east coasts.  At one point her boyfriend proposed to here atop a mountain in Switzerland.

So.  I don't identify with her.  But I liked her, wished her well, laughed at the stories she told about her parents (my fave--her father consoling her about an early divorce, saying "You're an actress, you needed a dress rehearsal").

Thing is, when it comes to growing up in America, my life resembles hers hardly at all.  She seems wildly, unbelievably, enviably lucky beyond words.  Because I am about as certain as I can be this character (have zero idea how much the character has really in common with the actress) has pretty much never gone hungry, not lacked the funds to treat abcess teeth so gone to an emergency room, never been homeless (even if only for a short time), hasn't lost a parent to a slow cancer that eventually ate her brain after years of alcoholism, never found out a loved one had been raped many times in childhood and another had been raped the night before last.  Didn't watch a fiancee die suddenly and then spiral into semi-suicidal depression.

Yeah, I am sure she was upset to find her boyfriend was a genuine jerk in lots of ways.  It is sad, and great to know she learned better.  Three children in a happy marriage!  Brava!  Didn't lose any of them?  Several women I know have.  Several have had bulimia.  Been banished from their families.  Struggled with drug addiction.

She says she's been in therapy.  So have I.  I cannot imagine what she had to see a therapist about, though.  Does this sound mean?  I hope not, because it bears repeating over and over again this character is likable!  She proves charming and witty.  Her life unveils itself as a lovely one, and frankly small wonder she's happy.  I'm happy for her.

But I don't feel much moved.  Your mileage may vary.  She seems nice, though.