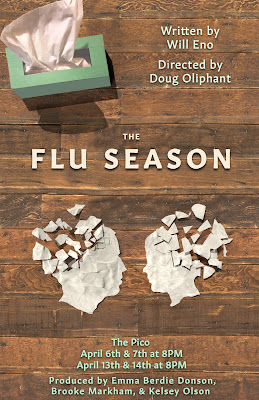 One of my best friends invited me to opening night of a play in which he performs--The Flu Season by Will Eno.  I ended up very glad he did so.  As of this writing, it has three performances left.

The play consists of six characters--three men, three women--who observe/participate in events in a mental hospital during one intense but swift winter.  The Doctor (Mark Hein) and Nurse (Heidi Mendez Harrison) of course make up part of the staff, helping Man (Joe Sartee) and Woman (Brooke Markham) as they check in.  The former two have lots of tales to tell of their pasts, tales of regret but joy, sadness but appreciation.  Meanwhile, the latter slowly (or swiftly) get to know one another, clicking despite or maybe also in part because of their mutual issues, not least an inability to handle their own feelings about...well, almost anything.

Added to the brew we also get to know two other characters, a male who identifies himself as Prologue (Nick Moss) and a female who calls herself Epilogue (Anna Evelyn).  They speak directly to the audience, one from the point of view of the present, the other speaking from the future, having already seen or perhaps lived through this play.  We, and Prologue, play catch up.

The plot, while important, takes a second place to the very challenge Man and Woman face--handling the world, events, other people, plus the many emotions arising from all of the above.  Call it the meaning of life if you like.  I would argue experiencing life hits closer to the mark.

What do we do when feelings change?  Or when consequences we did not imagine (or did not take seriously) catch up?  How do we endure hope or bafflement or change or sameness?

If this sounds hopelessly philosophical, allow me to point some salient details.  First must be the wit of language.  Truly, this playwright understands deeply the power of words to entrance, illuminate, or fail.  Second, despite all that the story for all six characters remains deeply personal.  All six grab our attentions and sympathies.  We feel with and for as well as about them all.  The cast resolutely brings all of them to entrancing life.  As a result, we find ourselves entertained amidst sadness and sweetness, eccentricity amid depression, the absurd side by side with relentless, cruel logic.

The world in the play does not change. It simply lives.  Nations' destinies feel no impact, but every member of the audience feels many things, often keenly.  Honestly something this abstract should not work as a piece of theatre--at least most attempts I've seen drown in their myopic symbolism.  The Flu Season does the exact opposite--sail heroically into our hearts, tattered sails yet catching the wind and faded banners somehow rippling in the uneven wind.