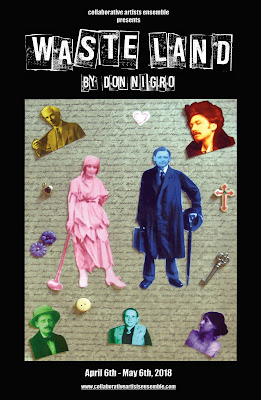 Apart from the spoilers warning, as per usual, let me make something serenely clear--those lacking any interest in literary art and/or artists will probably find Waste Land by Don Nigro a slog to get through.  I quite enjoyed it, but then I'm the kind of art nerd who finds this stuff fascinating.

The title comes from the long poem with which T.S.Eliot essentially made his name in literary circles.  But the play itself focuses more upon the relationship between Eliot and his first wife Vivienne, whom Virginia Woolf (in)famously referred to as a "bag of ferrets around Eliot's neck."  This was not at all a kind thing to say, and of course she felt insulted by such words.  Eliot himself--at least in the play--seeks to downplay this and many other problems, issues and the like. 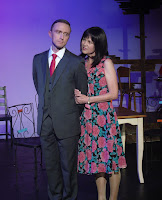 Eliot (JJ Smith) of course become one of the most famous and revered of the so-called "Bloomsbury Group," a loose association of writers and artists including Woolf (Georgan George) and Ezra Pound (Bartholomeus De Meirsman) as well as Bertrand Russell (John Ogden), Gertrude Stein (Deborah Cresswell) and James Joyce (Rich Brunner).  Into this ecclectic, brilliant but often dysfunctional assembly Vivienne (Meg Wallace) barely fits.  Not that others made zero effort to welcome her--that would be too simple--but their efforts as often as not ended up too little, too late.

At the heart of the play, told with bittersweet humor, remains Vivianne's descent into mental instability.  What at first might have seemed moodiness, or in our own terms maybe bipolar personality, eventually became a life wandering amid delusions.  It goes to some extent hand-in-hand with her husband's fierce attempt to write his poem, the work that ultimately became "The Waste Land."  To achieve this he figuratively and sometimes literally abandoned his wife, an act he did with genuine guilt but also disarming courtesy. 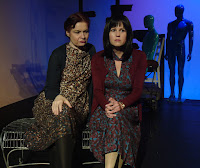 Eliot grew more and more busy, exploring the sometimes-odd things which grabbed his imagination, aided by his growing fame. Vivianne, alas, found it all less and less bearable.  The play follows events up to and a little past her own death in a mental asylum to which her brother had her committed, to which Eliot himself never visited, not once.

This might, you expect, become a story about a fragile woman destroyed by her ruthless artist husband.  But no.  For one thing, via performance and script we see Vivienne as both a good but fragile soul, yet also a force of pointless chaos and source of constant humiliation.  Likewise Eliot has something myopically heartless yet incredibly sensitive about him, wrapped up in layers of defenses.  The performers equally portray each characters' pain, sometimes with doing little more than looking at the other talk for a time.  It proves heart wrenching. More, this rampant madness is hardly the stuff of Vivienne's life only.  We watch Pound dissolve into madness as well, learn of Joyce's daughter's fate as her mind succumbs to schizophrenia, are reminded Woolf will one day do precisely as she threatens/boasts at one point--fill her pockets with rocks and walk into the Thames.

It makes for a compelling maze through which to wander, providing you don't mind the often-eccentric, sometimes unlikable company.  Most of the cast does truly wonderful jobs, even when operating under a problem--namely, the theatre in the configuration used for this production creates an echo.  Very much a problem for anyone whose voice lies in the upper register.