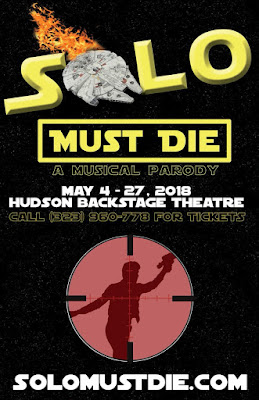 The idea sounds cool enough.  A parody based on Star Wars and especially the character who is the focus of the upcoming movie.  Of course part of me thought "But how can they make a parody of a movie that isn't out yet?"

Which shows a total lack of imagination on my part!

Solo Must Die: A Musical Parody literally has the framework of a fan (John Ryan) insisting his friend (Jordan R. Coleman) read his fanfiction about Han Solo.  Very reluctantly, the friend agrees and soon we find ourselves in Cloud City in between events of Episode IV A New Hope and Episode V The Empire Strikes Back.  Han Solo (Jordan Stidham) himself is on the run and crash lands, just in time to hopefully do a favor for his old pal Lando Calrissian (Keenan Montgomery).  However, Grand Moff Levine (Ari Stidham), the local law enforcement official--or something, we're not that clear--wants nothing more than to kill Han Solo so as to impress Darth Vader.  Turns out his beautiful young wife Galaxia (Selorm Kploanyi) doesn't mind helping since Han jilted her years back.  Meanwhile, Lando wants Han's help in wooing Annie (Kaitlyn Tanimoto), Grand Moff Levine's young
daughter/clone or something.

Yes, it is deliriously and delightfully complicated--one of the hallmarks of good farce.  Make no mistake, this qualifies.  Yeah, it has a few weak spots but overall the cast does a splendid job of mastering that not-quite (or at all) real attitude for a farce, coupled with excellent timing and a firm feeling for the audience.

As things proceed, events get more complex and weird, but it turns out to be more than a string of gags.  Good parodies, from Young Frankenstein to What We Do In Shadows or Harry Potter The Musical, come from a love of the material.  And good comedy requires a plot that has some kind of emotional resonance.  Turns out this one is all about Han realizing, despite his many objections to himself more than anyone else, he loves Leia and also enjoys the respect he earns
being a good guy.

For the record, the whole cast seemed to having a ball, often just enjoying the unbelievably silliness at every turn.  At one point Kylo Ren (Alex Lewis) and BB8 (Michelle Wicklas) show up from the future, the former determined to kill his father before he himself was ever born, because that is just "so hard core."  Chewbacca (Cooper Karn) shows up as does Luke (Sean Draper) and a young Obiwan (Hughie Stone Fish).  This represents the tip of the iceberg, amidst plenty of catchy songs and some quite nice musical numbers.  Quick note--everybody else dancing could take a few lessons from the Big Guy (i.e. Ari Stidham aka Grand Moff Levine) because he sells every single move and glance.

Solo Must Die: A Musical Parody plays Fridays and Saturdays at 8pm, Sundays at 3pm until May 27, 2018 at the Hudson Backstage Theatre, 6539 Santa Monica Blvd. Hollywood CA 90038.