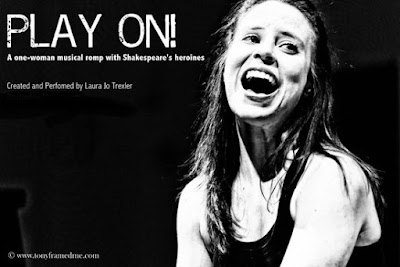 A woman.  A grand piano (or any piano really, this one happened to be grand).  Some songs.  Such a simple, yet challenging premise.  One Laura Jo Trexler meets with talent, passion and panache!  In this case the conceit lies in the pov from each original song she performs.  Each one has a female character from the works of Shakespeare, from Gertrude (in Hamlet) to the Dark Lady of the Sonnets and beyond.  Along the way, we experience enough passion, humor, tragedy, silliness and the like for a full play.  Rosalynd's giddy fan-girling over Orlando, Ophelia's soul-deep sorrow before she goes into the water, Countess Olivia's sultry invitation to the "boy" Caesario...honestly, the show left me wanting more and more and more!  Not simply because the songs are good (they are, but that remains a different point) but mostly because of the performance.  Or I should say performances, because each song proved a tiny show in its own right.  Honestly, each time I totally believed the singer was that character, from Viola to Lady Macbeth!  So impressed was I with this entire tour-de-force I went into the lobby and bought the album!


The full title of this show is Play On! A Musical Romp Through Shakespeare's Heroines.  I had the enormous good fortune to chat with composer/performer Laura Jo Trexler and am happy to report she will be doing this show again and again in different venues.

Play On! was part of the 2018 Hollywood Fringe and has now closed.
Posted by Zahir Blue at 8:00 AM