The Woman is Perfected (review) 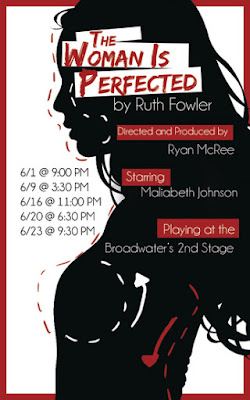 For those of you don't know (I did not at first) the title The Woman is Perfected comes from the very last poem by Sylvia Plath.  That alone might well give you a notion at its feel.  A young woman spends the length of this one person show talking pretty much non stop to her visiting mother.  Although quite pretty, she remains obsessed about her looks, having just undergone a series of botox injections to "take away all the wrinkles."  She notes she doesn't mind the pain.  It fills and distracts her from...other things.  Those other things reveal themselves like symptoms of some horrific condition as she talks--and this turns out to be far from a simile.  It proves the absolute truth.  This harrowing, fascinating portrait shows a woman who has absorbed misogyny into her psyche without condition or doubt.  Literally, it seems her every choice has been calculated to help destroy what she most hates--herself.  Yet she's not horrible.  She's kind, and patient.  She tries desperately to love...well, someone.  Anyone.  To earn their love in order to feel loved because she clearly feels that not at all from any quarter.  Indeed the longer I think on the play the more horror I feel at the kind of mother she must have, who sees this wreck of a human life who is her child and evidently does little or nothing.  I felt myself bleed a little watching this play, so great was its power.