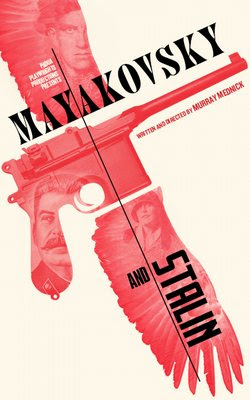 I'm such a theatre geek in so many ways my reaction to Mayakovsky and Stalin proved...well, geeky.

Essentially, the full-length play gives us poetic slices of two lives, intertwined in subtle and compelling ways.  One, poet Vladimir Mayakovsky (Daniel Dorr), heralded the Russian Revolution and sought forever to upset his audiences.  Something of a divine madman, he found himself living with a married couple, Lilya (Laura Liguori) his sometimes lover/sometimes muse, and her very liberal, very loving, very rational husband Osip (Andy Hirsch).

Second was Soviet dictator Jozef Stalin (Maury Sterling), arguably one of the most successful of his breed, but this play centers on the 1930s as his plans to industrialize his brave new world are increasingly eclipsed by paranoia, myopia and his own lack of real vision.  Much of this plays out in his relationship with his second wife Nadya (Casey McKinnon).  Both she and Mayakovsky prove unable to cope with the world as it evolves, the harsh place where justified terror becomes part of every breath anyone takes.  These two commit suicide two years apart, by shooting themselves in the chest.

Tellingly, Nadya's death results in silence from her husband, with rumors spreading about exactly what happened, rumors never addressed.  Mayakovsky's death inspires his beloved Lilya to write to Stalin, asking his name be officially rejuvenated in the Party's eyes.  Stalin does this, despite the fact he thinks the man's poetry mediocre at best.

The words "authentic lives" keep coming to mind.  Over and over.  As if to make that point clearer, a Chorus (Max Faugno) gives all kinds of background details as this kaleidescope of human lives unfolds.  Yet he never preaches.  Simply tells facts.  Sometimes stepping in to play one of Stalin's friends whose job it was to listen and agree.

But never to preach.  With a work like this, playwright/director Murray Mednick could so easily have crossed that line.  He did not.  Nor did the actors fall into the numerous traps I've seen others fail to avoid in similar scenes and pieces.  Stalin could have come across as just angry.  Nadya might have whined.  Mayakovsky's speeches so often come across as almost gibberish but the actor clearly knew precisely what he was saying--just as the rest of the cast remained human, remained real throughout.  Even when talking to the audience (no small feat).

What's more, I can say this uniformly of the entire cast--up to and including seemingly "small" roles as Masha (Ann Colby Stocking) who is Nadya's personal maid, Yelena (Rhonda Aldrich) and Elsa (Alexis Sterling) mother and sister respectively to Lilya.

Sometimes I speak of plays as dreams, other times as myths.  This play comes across as a poem, an intimate examination of some moments and some people in minute, telling detail--something to learn from, but not by agreeing with what the poet tells you to think.  This poet isn't doing that.  He bids you look.  Listen.  Consider.  Feel.  Which strikes me as especially powerful, if not as linear as some audience members might prefer.  Not the audience opening night, though.  They applauded as loudly as did I, and with methinks as much gratitude for the experience.