A Flock of Macaws (review) 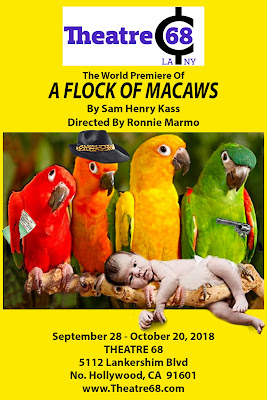 Been trying to figure out the title of Sam Henry Kass' play A Flock of Macaws, playing at Theatre68 in Noho.  On the one hand, it might refer to the central character Daughter (Mercedes Manning) and her backstory.  She claims to have been abandoned as a baby, found in a zoo between the gorillas and a cage with (you guessed it) a flock of macaws.  At one point she expresses a half-sarcastic desire her real parents were the gorillas.  So are her parents, whoever they were (including the couple who adopted her) a flock of macaws?  Metaphorically?  Maybe.  Or maybe we're supposed to just think about it, to come up with our own theories.

In which case that is mine!

Daughter opens with a monologue, directed to the audience.  This rarely works.  In this case, it does.  Frankly, by the first sentence I felt sure this was going to be a good performance.  Because Manning didn't just utter lines or give readings--she talked.  She spoke to us, telling the truth (albeit not all of it--she is a human being after all) about her longing to find her mother.  How this quest was born out of her pain.  I believed her. 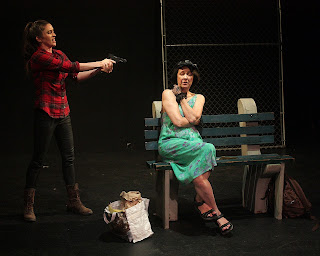 The play deals not with her quest, but what happens when she finds the very strange woman Daughter insists is in fact her Mother (Deborah Geffner) who likewise speaks truth with every word out of her mouth--even when she's lying or deluded or trying not to say anything at all.  No small feat!  But wonderful to behold.

In fact the whole show cut straight to the bone of everything, or tries to.  Because the characters of course wiggle and try to avoid the knife!  Mother does not want to admit giving birth, dismisses the birth certificate identifying her as a mother, agrees that she might come to admit her identity all the while wandering in word and mind through her own odd inner landscape.  What can Daughter (or the audience) do but follow, or try?  Along the way we meet Actor (Hansford Prince) and Actress (Julia Valentine Larsons), who will play all parts in the almost flashbacks examining who just might be the Father.  Maybe.  Just as later they take on the roles of Daughter's adoptive parents, a withdrawn but kind enough couple in Idaho (a place Mother insists does not really exist).  The result feels something like a dream, something like an acid trip, and not a little bit like a kind of psychological descent into Wonderland.  Or maybe Purgatory.

With material like this, the temptation to simply be funny, or generically "weird" would be strong.  Not one cast member succumbed,, which serves as a nice tribute to director Ronnie Marmo.  Via coaching and/or simply by choosing these performers, he made sure the play never became about the oddity of it all.  Amid all the bizarre peaks into a damaged imagination emerges truth.  Oh most sacred and fragile Truth.  Truth about what trauma is truly driving Daughter to find a kind of anchor in her birth mother.  Truth about what Mother's life must truly be like and why she did not keep her child.

And in the end, each has heard the other's story.  Each learned the others' truth.

Thus Dionysus, patron deity of the theatre, is appeased.