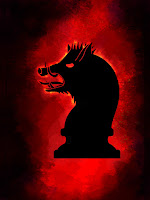 I am directing a production of my favorite Shakespeare play.  Without getting into too much detail, let us say my childhood ended up a lonely one--I was too different, too 'weird,' too much of an outsider to find much welcome. Perhaps that's why this play resonates, especially since my reaction to all this was not (at least initially) at all wise or healthy.  Richard III (as a character in a play, not necessarily in real history) did the same.  On a spectacular level.

We open April 27, Saturday at 2pm.  Performances go on until May 26, with Sunday shows at 7pm.  This marks the premiere major production of a new company, theatreANON!  And yeah, we are raising funds to meet our bills (mostly rent).

Over the next several weeks I'm want to introduce you to the cast.  A director's job is over halfway done if the cast is the right one.  So yeah, halfway done even before the first rehearsal! 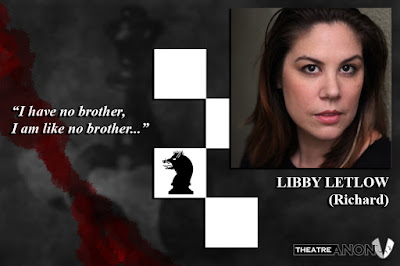 Libby Letlow is portraying the title role in Richard III: Hour of the Tyrant.  Honestly I've seen her in almost a dozen different roles, so when she auditioned (and knocked it out of the park) I had an inkling of her potential, to say the least.  Honestly about four people who auditioned could have played the role, but Libby seemed to me the one who'd give the most interesting Richard.  As rehearsals have gone on, what can I say but she continues to surprise in the best possible way.

No spoilers, but honestly I can hardly wait to see what her finished performance will look like! 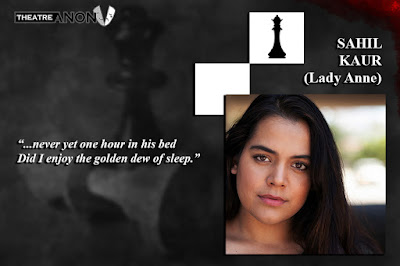 When she auditioned I'd never seen Sahil Kaur, which is a shame since by now I'm sure her performances would have worth the seeing!  Lady Anne too often ends up cast and played as a victim, a fragile flower seduced then crushed by the ruthless, powerful Richard.  Honestly, though, Shakespeare's women rarely seem this way to me.  Besides, it makes for poor theatre.  As rehearsals progress, Sahil's choices as Lady Anne frankly thrill me--fulfilling the promise I saw during try-outs.  Her Anne is proving strong, a passionate woman who offered much to Richard as a wife, a partner, even a friend.  His tragedy--and hers, as well as England's--lies in the fact he could not bring himself to accept her offer.