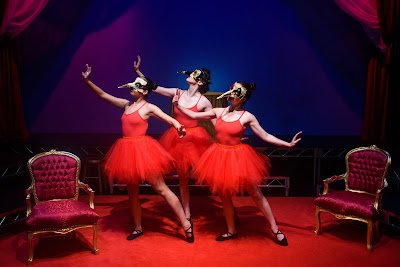 One of the many things I like about City Garage in Santa Monica is how they produce major playwrights other than the ones we expect.  Case in point--Moliere.  The Bourgeois Gentleman marks only one of many plays by the great French comic playwright.  Many productions of his works focus on the basic comedy--which works, because they are scathingly funny.  Yet they felt far more scathing to their original audiences, who saw a topicality we have to some degree lost.

Unless you do a production with our modern world in mind, without sacrificing what makes these works such a vivid and individual voice.  Hence, the City Garage.

The story focuses on Jourdain (Bo Roberts) a willful but grossly ignorant businessman who longs to move amidst the highest of society.  Towards this end he has hired various tutors (Trace Taylor, Martha Duncan. Rob Nolan, etc.) to teach him about music, dance, philosophy--the qualities expected of a gentleman as opposed to a mere shopkeeper (albeit a wealthy, successful one).

By any measure, the results prove hilarious.  He horrifies his teachers, and takes their comments as proof he is a natural genius, one naturally given to sophisticated ideas even while singing a song about amorous relations with a sheep.  When a tailor (Danny Hackin) makes him the most elaborately ridiculous outfit imaginable--for a large sum naturally--he regards the peels of laughter from his wife Madame Jourdain (Geraldine Fuentes) and servant Nicole (Lindsay Plake) as proof they don't understand.  Just as he dismisses the fact a Count (Troy Dunn) keeps borrowing increasingly large sums could be anything other than the highest honor!

Yet for all that, Fontaine isn't an evil man.  He isn't cruel so much as thoughtless.  And foolish.  So when he stand in the way of his daughter Lucile (Carina Conti) wedding her love Cleonte (Grant Gerber) and in the process his servant Covielle (Andrew Loviska) wedding Nicole, no one finds it hard to trick him.  Outside his area of expertise, the man behaves like the most gullible of idiots.  The Count has, in the name of wooing a certain lovely Countess (Angela Beyer) on Jourdain's behalf, has in fact been doing so for himself--with a fair amount of success in the end!  A bit of absurd play-acting leads our anti-hero by the nose in accomplishing all he swore would never happen.

He is, in fact, helpless.  And rich.  Entirely dependent upon the relatively mild cruelty and ethics of those around him.  Dial up the former and down the latter, then what do you get?  Or make Jourdain himself malignant instead of a fool.

As ever the direction of Frédérique Michel proves compelling in all sorts of obvious and subtle ways.  There's even a wonderful Brechtian touch, mingling the naturalistic with the stylized.  We end up both engrossed in the play yet aware it is a play.  No small feat!  That the ending doesn't quite feel like an end adds to the effect--this story, like all stories, continues.