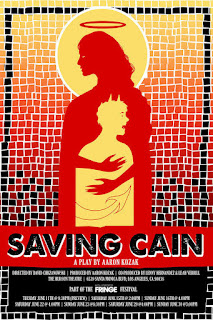 What this show, written by Aaron Kozak, offers proves very compelling indeed.  No less important, it surprises.  Saving Cain was described to me as the story of a rebellious teenager trying to deal with his born-again Pentecostal control-freak of a mother.  I expected one of two things:  Either a dark comedy or a polemic against a certain brand (at least) of Fundamentalist Christianity.  Maybe both.

I got something a lot better.  The pair of mother (Leah Verrill) and son (Lenny Hernandez) play out a story that kept setting up plot formulas that then veered away into something more real.  And by real I often mean more touching, profound, and compelling.  For one thing, that boy is worse than sarcastic.  Not a bad kid, far from cruel for example, but one who's reacted poorly to his mother's smothering presence.  Well, he's a kid.  No doubt he started all this when a child.  We none of us make perfect choices then.  Remember that.

For another, his Mom is not quite as rigid as one might think.  She has a very narrow lens through which she views life, but for example she shows over and over again her love of her child is so very real.  More, while she overreacts way too much, she also shows genuine kindness.

But more importantly the trajectory of the story remains focused on her, and after a time we see the raw pain with which she lives every single day.  Saving her son when his life spirals into something horrible (no, really--this is bad) become a mountain she cannot climb yet never does she give up.  She even begins revealing some of the source of her pain, and how she acts in revealing that, then doing whatever she can (and some things you'd think she cannot) she earns our deep respect.  Earns it.  Even as she gives up control, forgives herself a little, opens up her heart with all the terrible potential for suffering that almost immediately comes true.  But then, the potential for joy remains.  And stays.   One of many ways the ending and the whole show startled me.

This is really good stuff.  It has a flaw though, one I see a lot of to be honest.   It isn't really a stage play.  It feels and seems structured more like a movie.  Tiny scenes with constantly shifting scenery, a cast of what feels like hundreds (covered with doubling and careful suggestion of others present), even the use of subtitles.  I don't believe for one second the story itself need be a film (although it would make a good one--just as it could be a very fine novel).  But this format was that of a film rather than a play.  Which I see again and again.