The Narcissist Next Door (Fringe Review) 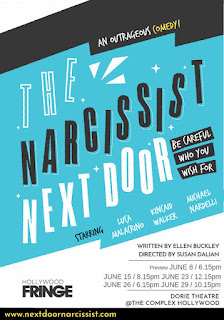 Beyond doubt the cast of this play are all energetic, talented and possess genuine charm.  Director Susan Dalian shows skill at using a tiny space while maintaining the energy needed.

However, this script's very real potential needs work.  This is an early draft of what might well be an excellent comedy.  Right now, it wanders around the situation as well as the characters without diving very deeply into either.  Worse, it doesn't seem like a play at all, but more like a sitcom.  The same characters appear in nearly every scene, forcing the play to stop dead while costumes (and sets sometimes) change.  Its story does not really end either so much as stop.

Nothing wrong with the ingredients, so far as that goes.  Sebastian (Michael Nardelli) and Kate (Kincaid Walker) are best friends--well off white white people trying to make careers in the arts in LA.  The former's new neighbor Tony (Luca Malacrino) seems to be a godsend, helping them focus on things and thus will their dreams further into reality.  Only he turns out to be the Narcissist of the title, as becomes almost instantly obvious.

Putting on my Dramaturg's hat for a moment, I think the first two scenes are unneeded and the play should probably consist of their working vacation in Mexico.  Then make the whole thing full length to really explore what is there.  Frankly no one is fleshed out enough to make that much of an impact, nor is anyone other than Tony quite grotesque enough to form the centerpiece of some very arch satire (if that is what's intended--I do not know).

Be lovely to see a much later draft of this script, because frankly the potential in it and the writer seem genuine.